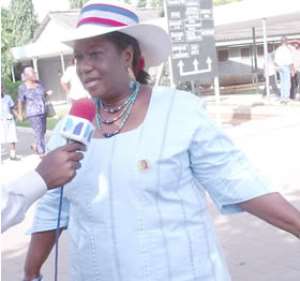 Accra, 20 May (pFm)-- The political whirlwind in the ruling New Patriotic Party (NPP) is rising to a fever pitch with fierce rebuttal on Thursday, May 19, 2005 from Hawa Yakubu to an allegation from Mohammed Awal, the official hit-man of the Vice-President, Alhaji Ali Mahama, that she is having a love affair with Nana Kofi Coomson, the publisher of the Chronicle Group of newspapers.

"I've never, never and I dare anybody in Ghana politics to come out and say Hawa Yakubu is my girlfriend. No man has gone out with me in the sense, as we know it. We are in politics and at the same time we are able to control our morals and our values and I've worked on this."

"I challenge any man to come out and say, I have done this or I have done that with Hawa Yakubu from top to bottom. I've been victimized, even within the party some alleged my relationship with some leaders, and that is my problem. But I'll remain focused."

These are the exact reaction of Hawa Yakubu, writhed in agony and anger as she spoke to Mr. James Agyenim Boateng yesterday morning on Radio Gold, an Accra-based private radio station.

She described the allegation of an intimate relationship with the Chronicle publisher as outrageous and unfounded.

"I don't abuse anybody and for somebody to use the opportunity as the aide to His Excellency the Vice President of the Republic of Ghana and make such outrageous and unfounded statement is unfortunate."

Hawa insisted that there is no problem between her and the Vice President Alhaji Aliu Mahama. He said I have never met the Vice-President.

"I went to the Regional Minister, Upper East when I was in Bawku for a very serious assignment. I left it to go back to Tamale to be with the Vice President for the brother's funeral. I did that; that is meeting the Vice President."

She alluded to the support she gave to the Vice President when the hawks in the NPP were moving to oust him from his seat in the run-up to the election.

"Haruna Aremeya, his Special Advisor who was my senior in school also knows the contact I had with him in the process of deciding the Vice President for this country and I supported him. I support the President, I supported my party."

"But it doesn't stop me from having a vision, which is different from somebody else's vision." The Iron Lady point out.