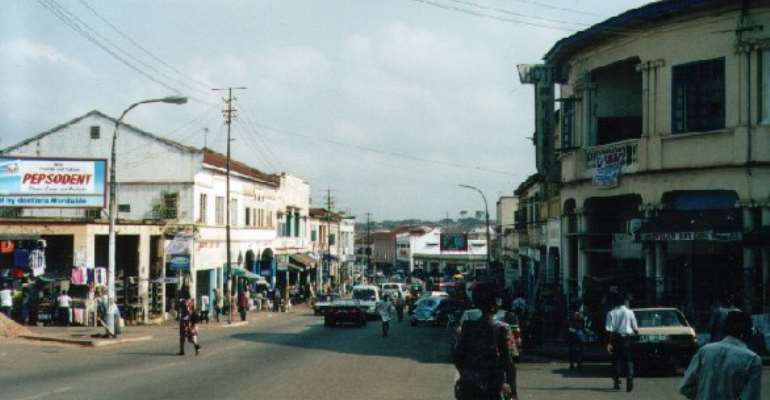 TROUBLE AWAITS NPP IN 2008 They will face us in 2008, they warn Kumas, May 19, Chronicle -- IT IS not far from right to say that most people who dwell in the city of Kumasi where the ruling New Patriotic Party (NPP) always wins with the greatest margins, are disillusioned and dissatisfied with the prevailing living conditions in the country.

If the warning signs given by the residents of Asawase in the recent bye-election is not enough, then the opulence and reports of corruption, are having their toll on the people.

The people are grumbling also about lack of infrastructure projects in the area, compared to other parts of the country, even though they had voted massively for the government in power.

They believe the government is panic-stricken by the verifiable falsehoods of tribal politics the NPP had been accused of, in its distribution of the national cake and policy action for the country, as “nothing is being done” to improve the lots of the people and the city in particular. Curiously, the Government's first action of constructing the expensive road network from Accra to Kumasi appears to have been forgotten so soon.

In a “vox-pop” interview with a cross section of the Kumasi inhabitants, they gave a stern warning to the NPP government to include a human touch in its policy directions as soon as possible, and come out with solutions as well to alleviate their hardships, especially following the decongestion exercise, and the withering effects of the extortionate petroleum prices. They warned that they would have to contend with them on the electoral battlefield in 2008.

The spectre of Anane and Edumadze, the two most corruption-tagged individuals nestling in the comfort of Government, has been a constant reminder of the perceived insensitivity of Government notwithstanding the outcry of even some party members.

The citizens complained also of many abandoned projects in the city that were initiated during the 'Positive Change Chapter One' and attributed this to lack of supervision on the part of government, adding, “in the chapter two we have seen nothing even though we were made to believe that the second term would be for those of us in the Ashanti Region.”

Nevertheless, minority of the interviewees who spoke to The Chronicle hold a contrary view. Although they acknowledged that times are hard, they do not see government as being the cause of it. “Times are hard all over the world including Ghana. The present hardship condition is not peculiar to our country, but a global phenomenon,” they averred.

Mr. Andrews Opoku Agyemang of Opoku Agyemang Enterprise at Adum in Kumasi who deals in 'suiting materials' believes that the proliferation of “buying and selling” business in the city has of late brought a slow pace in business transactions.

According to him, as the days go by, majority of the rural folks find their way into the city to look for non-existing jobs. After a few days, “they engage in store business and as a result slow pace occurs because many are doing a particular job at a time, ” he noted.

He contended that since enough money is not in the system, following the economic policy of the government to send all monies to the bank, people are very much conscious of what they buy, coupled with the stabilization of the cedi. He however admitted that government is not doing much for the people of Kumasi.

But the other school of thought who constituted the majority of The Chronicle's respondents is clamouring for the government to act now or they abandon ship, indicating that the silky comfort-living ministers should bear in mind that they clambered up to power with them (the constituents) as foot soldiers.

Even though majority of Ministers are actually scratching, the Government communication machinery is probably not connecting well enough, as the lifestyle and actions of a few bad DCEs and Ministers, are tainting the whole government with corruption, particularly as no one has ever been sacked despite press exposes.