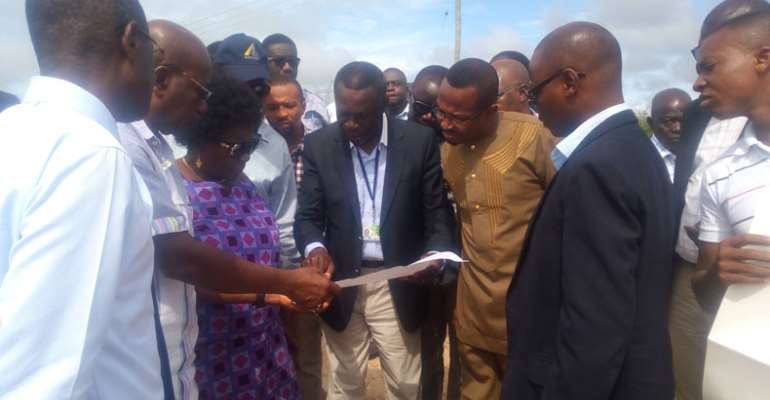 Cecilia Dapaah and her entourage at the site

Plans are underway by the New Patriotic Party (NPP) government led by Nana Akufo-Addo to construct airstrip for the people of Central Region.

In view of that, the Minister of Aviation, Cecilia Abena Dapaah, on Tuesday, paid a working visit to the proposed site in the company of officials from the ministry and the Ghana Civil Aviation Authority (GCAA).

The 3,000-acre land earmarked for the proposed Cape Coast Airstrip at Ataabadze in the Komenda-Edina-Eguafo-Abrem (KEEA) Municipality has been encroached upon by developers who have started undertaking their projects.

Madam Dapaah expressed concern about the level of encroachment, adding that the project would be compromised if adequate measures are not adopted to halt encroachment on the land.

The minister could not give a definite time for the commencement of project, but she revealed that the airstrip, after its completion, would accommodate light aircraft in the country.

Ms Dapaah noted that the current administration had focused on the aviation sector in order to open up the country for investment from the international community and develop the economic and tourism potentials of the nation.

“The project is dear to the heart of the NPP government, and efforts are being made to ensure the execution of the project,” she said

She reiterated the need for the Municipal Chief Executive (MCE) for KEEA, Nana Appiah Korang, to work hard to retrieve the land from encroachers to make government's vision a reality.