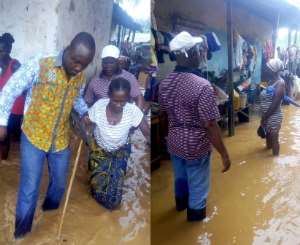 Axim (WR), June 12, GNA -The early morning rains that hit the Axim in the Nzema East district of the Western Region has rendered many people homeless.

The most affected residents are in Akyinim and Botukule both suburbs in Axim had their buildings and properties lost to the rain.

Mr Paul Blay, a 56- year-old farmer who narrowly escaped death after his mud house caved in during the rains is currently receiving treatment at the Axim government hospital.

Mr Frank Okpenyen, the MCE of the municipality during a visit to the affected victims expressed government's sympathy to them and said the Assembly would find ways of restoring their lost property.

The victims, mostly elderly women in the area had to be assisted by staff of National Disaster Management Organisation to salvage the debris of their belongings.

The MCE urged the residents to avoid indiscriminate disposal of refuse and to endeavour to desilt their gutters and drains to avert the re-occurrence of the disaster.

The affected people were advised to stay with their relatives as the authorities were working to find lasting solutions to their problem.