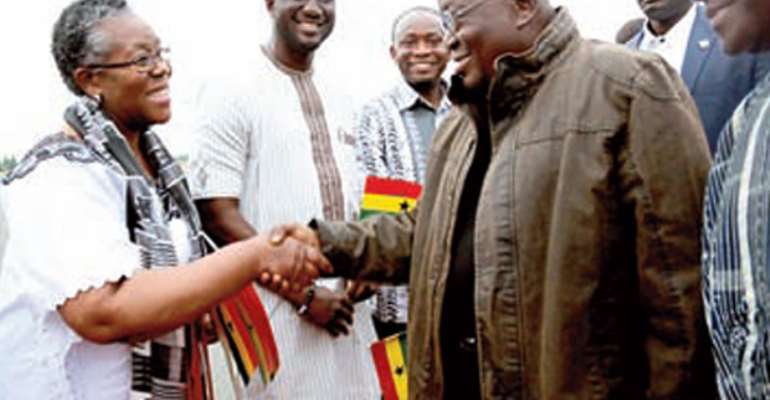 President Akufo-Addo being welcomed to Berlin

The Akufo-Addo government seems to be doing something that is catching the attention of the rest of the world.

After managing to get Ghana selected among three African countries and their leaders to the G20 Summit, which begins today, he has now secured a cool €100 million grant for the nation.

This came to light when he met the Ghanaian community in Berlin, Germany, yesterday on the sidelines of the G20 African Partnership Conference.

Making the revelation at the meeting yesterday, the soft-spoken Finance Minister, Ken Ofori-Atta, said, “The reason we are here is partly because of what Nana Akufo-Addo has done, essentially that there is a new confidence that Ghana is coming back; Ghana is back.”

Justification
According to him, prior to Nana Akufo-Addo's New Patriotic Party (NPP) assuming the reins of government of the country, Ghana had not been invited to be part of the G20 African Partnership Conference, let alone signed a compact with the stakeholders.

The only countries, he mentioned, were Senegal, Cote d' Ivoire, Morocco, Tunisia and Rwanda – saying, “We were nowhere near it.”

The Finance Minister noted, “With the work that he” [referring to Akufo-Addo] has been doing and we all have been helping, the Germans decided 'why don't we get Ghana involved in this?' and that's why we have qualified to it.”

That included re-profiling of the country's debt, the minister disclosed.

With that, Mr Ofori-Atta said, “We were able to go to the market place and get $2.2 billion worth of debt, which essentially created a sense of stability; immediately $2 billion was given to the Central Bank which meant that the currency became stable and business firms becoming confident where they were going.

“It was a real sign of confidence for us and we thought that was over; and they came back a couple of weeks later in March and said that 'You know, this G20 that we are doing, we should really put our money where our mouth is; so let's select three countries in Africa where we can have bilateral relationship with and they selected two who are already in the compact – which are Tunisia and Cote d' Ivoire – and they said Ghana be part of it…and they said here is another €100 million. Do something with it.'” There was a loud round of applause and cheers from the gathering.

Confidence
That, for him, was part of the recognition the world is giving to Akufo-Addo and his government for the good works they have begun.

Prior to the Akufo-Addo-led NPP government, Mr Ofori-Atta said, the country's ratings had been badly depressed – from B ratings to a negative outlook.

But with time and the effective measures they have put in place, he indicated, “that has been improved to a stable outlook.”

For him, this is significant because it puts the country in a better stead as it goes out to the market place.

“So we are beginning to see this sense of a regeneration; the Black Star is shining again and we are certainly, as Nana has been saying, not a poor country and as Aggrey said, 'You are not chicken; we are eagles, so we should fly,” he said to another round of applause.

Taunts NDC
The Finance Minister noted that no matter how hard President Akufo-Addo and his government try to fix the economy and put it on a sound footing, including probably making Ghana heaven, the opposition National Democratic Congress (NDC) would not recognize their efforts.

President Akufo-Addo was overwhelmed at the numbers that gathered to meet him and members of his delegation, which included Gina Blay, Ghana's Ambassador to Germany, who is yet to present her letters of credence to the German government.

He therefore expressed profound gratitude to the Ghanaian community in Germany for making time not just to meet him, but to share their concerns with him, with a promise to address most of the concerns raised during the forum.