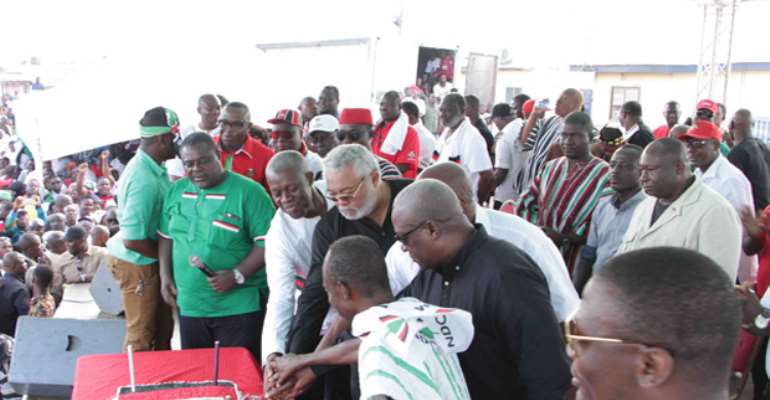 Former President Rawlings with former President John Dramani Mahama and some leadership of the party cutting the birthday cake ahead of the actual day.

Leadership of the opposition National Democratic Congress (NDC) has attempted to lure the party's founder, Jerry John Rawlings, to soften his stance as a special ceremony was organised on Saturday with the former president in attendance.

Although the day was not the birthday of the NDC founder, the hierarchy of the party thought it wise to 'bribe' him with tunes and cutting of cake to celebrate his birthday.

Interestingly, Mr. Rawlings appeared to have noticed the move by his party leadership whom he has been critical of.

He had advocated for the current leaders to be kicked out for new ones with integrity to take over the management of the party.

Mr Rawlings stated in Twi, “Today these people are trying to pamper me,” a statement which attracted a lot of laughter from the crowd.

He made the statement at Ashaiman on Saturday when he took his turn to address teeming supporters at a rally as part of the silver jubilee celebration of the major opposition party.

The former president did not spare his party leaders in an address, describing those who are calling for unity within the party as “hypocrites who are eager to stab you after achieving their aim.”

He believes that those barking for unity in the party should rather come clean and prove to be sincere with their calls by apologizing to those they have offended.

“When we say unity, I became united with someone. I apologised and I meant it. He could have turned his back and I will not have stab him; I could also have turned my back and he would not stab me in sincerity, truthfulness.”

He questioned the number of times the leadership of the party had called for unity in the party and ended up returning to the old deeds.

According to Mr Rawlings, “When they say unity, are we serious? How often haven't we gone through this kind of stage? He will be stepping you and laughing with you. They will be laughing with you and holding a knife behind them and the little chance they will stab you. How many times haven't we stabbed one another or haven't I been stabbed?

“I say that if we are serious, we are genuinely… we are being sincere that unity will work, it will work. But the ball is not in my court and not that I am a wicked person and I do not forgive or I do not have time for harbouring things like that, but we have made it to turn 'monkey dey work baboon dey chop' within our own NDC. No, no, we are tired of such things.”