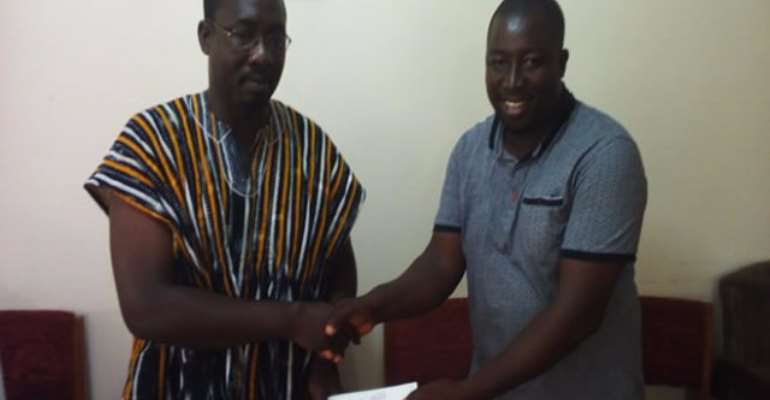 Chief Executive Officer for the Ghana Free Zones Board, Michael Okyere Baafi is supporting the construction of an ultra modern computer laboratory for the Wesley Methodist Basic School at Koforidua in the Eastern Region.

At a short presentation ceremony held at the Methodists Church office in Koforidua, Mr. Kingsley Ofosu, an aide to Mr. Okyrere Baafi, presented a Cheque for â‚µ33,000 for the construction of the ICT laboratory.

The cheque donation was raised by the Okyere Baafi Educational Foundation through Melcom Ghana Ltd for this purpose. The total cost of the project is estimated at â‚µ40,000.

Kingsley Ofosu indicated that, the donation forms part of efforts by the Okyere Baafi Foundation to contribute to the development of human resources in the New Juaben Municipality where the Free Zones Board CEO hails from. Already, a number of residents have benefited from educational support from the Foundation.

Synod Secretary for the Methodist Diocese, Very Rev. Dr. Samuel Duah Dodd who received the Cheque on behalf of the Church indicated, the presentation is timely. He said the school received 15 computers from government as a reward for emerging the best school with high score in General Science during 2016 Basic Education Certificate Examination (BECE) exams.

According to him, the school is unable to use these computers due to lack of space to serve as laboratory. It was therefore, fascinating for the school authorities to see efforts being made to have an ICT Center to facilitate teaching and learning.