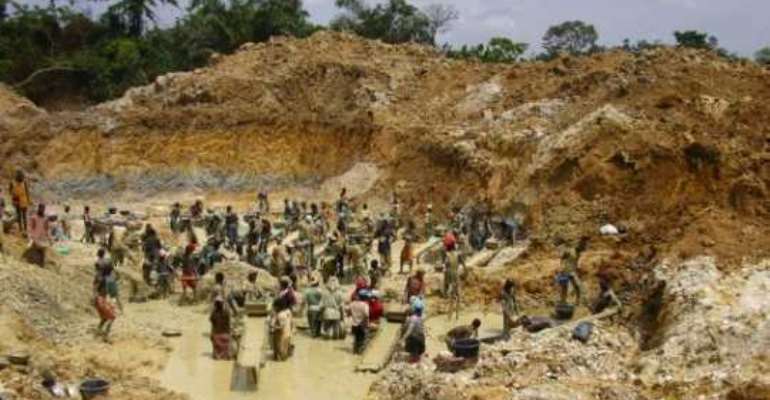 Monday June 5, 2017 marked World Environment Day. The day cannot pass by without talking about Chinese attitude and global environmental debacles. Don’t I sound excessively stereotypical and judgmental? Hey Jack! Wake up for a trip to Ghana, West Africa and you will thumb me up! The country’s rainforest, agriculturally viable hectors of land and water bodies are being destroyed at a dizzying pace by Chinese illegal miners and their local accomplices.

Illegal mining known in Ghanaian local patois as “Galamsey,” a name corrupted from “gather and sell” has plunged many environmentally conscious citizens into a state of bemusement. As the world observed Environment Day recently, I want to reflect on gold mining, Chinese attitude and environmental degradation/pollution. I will concentrate on Ghana with perfunctory evidences from two other countries.

Background to Gold Mining in Ghana
Alluvial gold mining had remained part and parcel of pre-colonial Ghanaian economic culture. What is now modern Republic of Ghana was originally referred to as Gold Coast. Insatiable want for Guinea gold, scientific curiosity, religious zeal, coupled with strategic reason motivated the Portuguese to sail along the West Coast of Africa otherwise known as the Gulf of Guinea in the 15th century AD. Geographically speaking, the Gulf of Guinea refers to the northeast most portion of Atlantic Ocean stretching from Cape Lopez in Gabon to Cape Palmas in Modern Republic of Liberia. The Portuguese named some portions of Gulf of Guinea in accordance with natural resources they found in abundance.

In fact, it was the Portuguese who named some areas of Africa as Gold Coast (Modern Ghana), Grain or Pepper Coast (Modern Liberia), Slave Coast (the Bight of Benin or Benin) and Ivory Coast. The most influential prince of Portugal, Henry the navigator sent vessels for voyages of exploration along the Atlantic coast as early as 1418. The Portuguese reached Gold Coast in 1471 under the Ship Captain, Diogo de Azambuja. Elmina Castle was constructed in 1482 as Sao Jorge da mina (St. George of the mines). It is believed that Christopher Columbus who claimed to discover the New World in 1492 was in the vessel that came to Elmina. The meaning of name given to Elmina castle is an ample indication that mining was part of Ghanaian economic life.

Before the Portuguese arrived in Africa, a river friendly alluvial gold mining was practiced in what is now modern Ghana. Alluvial mining is the process of mining stream bed deposits commonly known as alluvial deposit. The formation of stream bed deposit is caused by the erosion of minerals from their original source, and then carried away by water to a different location. When the sediments are deposited, they settle in accordance with their weight, with heavier and more valuable minerals like gold and diamond.

Mining Benefits in Ghana
The contribution of mining to Ghana’s finances has not been encouraging at all. There is a huge capital flight in the mining sector. Kwesi Pratt Jnr, is a managing editor of Ghana’s Insight Newspaper. He lamented over the minimal contribution of mining to Ghana’s economy, albeit environmental degradation and pollution. Speaking on UTV program on April 21, 2017, the journalist was deeply worried about Bank of Ghana’s Foreign exchange retention agreement with expatriate partners. Per this agreement, a higher percentage of the country’s mining revenue is retained overseas, the journalist hinted. But for managerial ineptitude Ghana’s mining cities of Obuasi, Takwa and Prestea would have competed with Johannesburg or Pretoria in terms of development. Youth unemployment in the mining areas is very rife, thereby encouraging illegal mining.

Ghana struggles with competent leadership to manage her institutions despite huge sums of monies paid to them as salaries. The country’s national leadership is conceptualized as neo-patrimonial (Sandbrook & Oelbaum, 1997). Neo-patrimonialism implies the utilization of governmental influence to reward political cronies. The distribution of state jobs by political patrons to followers especially in combination of implicit recognition and normalization of bureaucratic corruption, leads to incompetence, indiscipline and unpredictability in civil services and state-owned enterprises (Sandbrook & Oelbaum, 1997).

The boomerang effects of patrimonial leadership are the huge losses in the mining sector, poor states of mining towns and youth unemployment. In 1999, Mr Sam Jonah’s (Chief executive officer of then Ashantigold Fields) reckless derivative hedging strategy deprived Ghana millions of dollars from gold trade. Mr Jonah’s wrong hedging was partly responsible for the huge losses in the Ghanaian mining sector. An aphorism that Africa is rich by resources and poor by bank accounts is not applicable to all here. Patrimonial leadership coupled with mining managerial lapses and brazen disregard for nationalism and patriotism, had created huge bank accounts for some individuals at the expense of the country. I strongly support Kwesi Pratt’s call for a broader mining introspection in Ghana. Some inhabitants of Diaso or Denkyira Obuasi could not have committed such a horrendous crime to the late Major Maxwell Mahama if the management of mining companies had transformed mining areas into industrial hub of enviable height. As the cliché goes “the devil finds work for idle hands.” I am not trying to justify the horrific murder of the late army Major.

Metaphorically speaking, agglomeration of global trade and craving for investors have made the world smaller than before. Ghana is a fantastic business destination for investors and would-be investors despite the aforesaid leadership drawbacks. Like the Portuguese in Ghana’s history, insatiable greed for guinea gold has attracted many Chinese into Ghana. The influx of Chinese into Ghanaian small-scale mining sector has ended heretofore environmentally friendly galamsey operation. Ghana is divided into three main geographical belts namely: the savannah belt, the forest belt and the coastal swampy mangrove. Ghana is a cocoa producing country and became a leading producer in 1911. As of 2017, Ghana is the second leading producer of Cocoa in the world. Chinese illegal miners aided by their local cretins had destroyed a sizeable acreage of cocoa farming land. Impenetrable rainforest of yesteryears is now devoid of wildlife. What is very nauseating? Ghana’s rivers Pra, Ankobra and Birim have been polluted more than my ability will permit me to describe! Equally irritable is the bloody nature galamsey fight had turned.

Chinese environmental degradation/pollution is becoming a global canker. In the Gambian Republic, the inhabitants of Gunjur village are interlocking horns with Chinese Golden Lead factory for destroying Bolong Fenyo; a wildlife reserve. The river at the reserve had been polluted beyond imagination. The anger of the inhabitants is escalating as their river is contaminated with hazardous chemicals and the color of the water becoming palpably reddish. In Zambia, there are growing concerns of Chinese controlling the proprietorship of the coal mining industry.

In Cambodia, Chinese illegal lumbering is devastating the forest at bewildering rate. Individuals who express opposition to Chinese unlawful logging do so with calamitous consequences as they could either face death or violence. For example, Hang Serei Oudom, a Cambodian local journalist was murdered in cold blood for attempting to create awareness of Chines illegal lumbering in the Cambodian Forest. What lessons will Ghana government learn from Chinese insufferable penchants for environmental degradation/pollution?

In Ghana, there is deep political bifurcation between the ruling New Patriotic Party (NPP) and the largest opposition party; National Democratic Congress (NDC). Trivial issues are used by both NPP and NDC apparatchiks and aficionados to score political points. It is also being alleged that some influential individuals in Ghana are behind illegal mining and its attendant degradation of the environment. A major conundrum of the social pundits includes; how Chinese illegal miners acquire visas to Ghana. This means that some unthinkable creeps within Ghana are assisting the Chinese to destroy their own resources. No sooner had campaign against illegal mining and destruction of environment gathered momentum than Ghana Police Service accepting gift from Chinese in Ghana. Chines Embassy in Ghana has also donated 10000 Ghana Cedis, to Attorney-General’s Department (citifmonline.com, June 7, 2017). China mission in Ghana implored the Media to be fair on galamsey reportage. It appears the Chinese are in the real business to take over the resources of Africa.

The president of Ghana, Nana Addo Dankwa Akufu-Addo has reiterated his government’s commitment to sustain China-Ghana relations, even so he will not hesitate to clamp down those who go against the laws of his country. As the world observed environment day on June 5, 2017, I commend the UN for this day. I also humbly appeal to the UN to impress on Chinese government and its citizens to respect the sovereignty and environmental laws of foreign countries. Ghana government must continue its commitment to galamsey fight! UN must complement the efforts of Ghana government and other governments in the world to handle the menace of illegal mining. Show me a desert and I will show you the significance of trees and rivers! The World must say no to environmental degradation/pollution.

By Nana Yaw Osei, Minnesota, USA
The Writer is pursuing PhD in Industrial and Organizational Psychology.

He is the Host of Critical Talks at Klasik Radio, Atlanta, GA