Mahama, Rawlings billed to show up at Ashaiman Anniversary rally 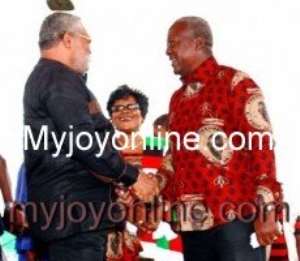 The opposition National Democratic Congress is celebrating its 25th Anniversary with a mammoth rally at Ashaiman, Saturday.

The rally is expected to be attended by all the party bigwigs including ex-presidents Jerry John Rawlings and John Mahama.

It will be the first time the two will meet on a public platform after ex-president John Rawlings openly criticised his compatriot John Mahama during the commemoration of the June 4 anniversary early this week.

Ex-president John Rawlings claimed corruption increased to insane levels under John Mahama and accused the former president of departing from the values of probity and accountability which formed the basis under which the party was formed.

According to him it was chiefly because of the corruption that the NDC lost power to the governing National Democratic Congress.

Mr Mahama has yet to make any comment on the matter.

This week, a forum organised by the party as part of the 25 Anniversary saw a number of the founding members of the party passing through.

Even though Ex-president Rawlings made a quick stop at the forum ground, Mr Mahama was conspicuously missing.

Organisers of this afternoon’s rally have said both men have confirmed their participation in the rally which will hopefully begin a new surge for united opposition against the ruling party.

The party’s National Organiser Kofi Adams is presently and grounds and will hopefully be joined by the other leaders.