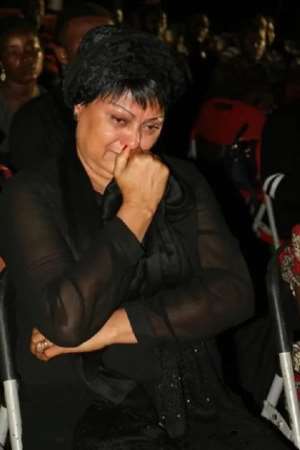 Accra, June 09, GNA - Madam Veronica Bamford, the Mother of Major Maxwell Adam Mahama, in a tribute to her son at his memorial service declared "I am falling to pieces; Tell the killers they have destroyed me".

The tribute, which was read by one of her family members, was driven by deep emotions, thus moving many of the mourners, at the Forecourt of the State House, to wail uncontrollably.

"Tell them they do not know this loving, very affectionate son of mine," she said.

She described her son as a 'special son, who had a good and compassionate heart', saying his sudden departure to eternity had rendered her empty.

"The gruesome and horrific way my poor baby was snatched from this earth is beyond any words," she said, adding that, she would go to her grave with a void in her heart.

The mother said her son loved his country, which had vowed to protect its citizens.

Madam Bamford lamented: "I need an answer to my question-why? Give me an opportunity to face these murderers so they can see and understand what they have done to a mother."

She, however, had taken inspiration from the word of God, she said, and believed that 'The Almighty God loves him best and would provide him eternal rest.'

He was commissioned into the Ghana Armed Forces, Infantry Corps as a Second Lieutenant on 7th September 2007.

The deceased was posted to the Fifth Infantry Battalion as a Platoon Commander on first commission.

He hailed from Tumu, in the Upper West Region.
He was the first child of the three children of his parents.

He was a Captain before his death; but was promoted posthumously by the Commander-in-Chief of the Ghana Armed Forces, President Nana Addo Dankwa Akufo-Addo with effect from Monday, 29 May, 2017.

The late Major Maxwell Adam Mahama was lynched by a mob at Denkyira-Obuasi, in the Upper Denkyira in the Central Region, on May 29, when he was allegedly mistaken for an armed robber, while jogging.

Before then, he was at post at the Military Detachment Base at Diaso, as the Commander, on relieving duties for an officer, who was due for writing his promotional examination.

The incident stunned the nation, provoking some calls for vengeance in instant justice against his killers; but many have asserted that his killing must end the impunity of lynching as instant justice, to serve as a memorial to him.

So far 34 persons have been arrested, from various parts of the country, to face prosecution.