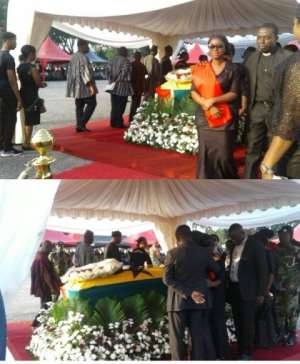 Accra, June 09, GNA - With heavy hearts, tributes and dirges; flowing and restrained tears, Ghanaians from all walks of life turned up at State Funeral Service to bid Major Maxwell Adam Mahama a befitting farewell, at the Forecourt of the State House.

Clad in the traditional mourning colours of red and black attire to signify their love and deep sorrow for the fallen soldier, they filed past his mortal remains from exactly 0630 hours, led by the immediate family.

The process was characterised with deep emotions and constant wailing, as some mourners even fell on the casket, which is draped in the national colours of red, green, yellow and black, and bordered with flowers and wreaths.

The presence of the military was heavily felt, though solemn, strategically positioned in their smart outfit.

The reading of the tributes of the 'Stephen of our times', cut off at a prime age of 31, started with that of his class mates from the Akosombo International Junior High School 2005 Year group, who described him as 'courageous, dedicated and a man of integrity'.

This was followed by the tribute by the Mother-in-Law, who described him as 'a lovely and caring husband', who brought joy and laughter to her home.

The Intake 47 - 2007 Year Group, referring to the course mates of the fallen soldier, took their turn to read their tribute.

They described the late Major Mahama as 'a very tolerant, loyal, and disciplined officer' and the 'Best Marksman' of the intake.'

The Qodesh Cantonments Branch of the Lighthouse Chapel International, where the soldier worshipped, described him as 'a God fearing man, who served his Creator with dedication, in spite of his busy schedule.'

They said they believed the late soldier would find eternal rest with his Maker.

The Old Students of Saint John's Senior High School then read their tribute, followed by that of Major Anthony Bam ford, the cousin of the fallen soldier.

Major Maxwell Adam Mahama was lynched by a mob at Denkyira-Obuasi in the Upper Denkyira District in the Central Region, when they allegedly mistook him as an armed robber, when he was jogging on Monday, May 29 this year.

So far, 34 suspects have been arrested in connection with the murder and remanded into Police custody, while police investigations ongoing.