My Tribute To Major Maxwell Mahama: What Would Constitute The Real Tribute To His Memory 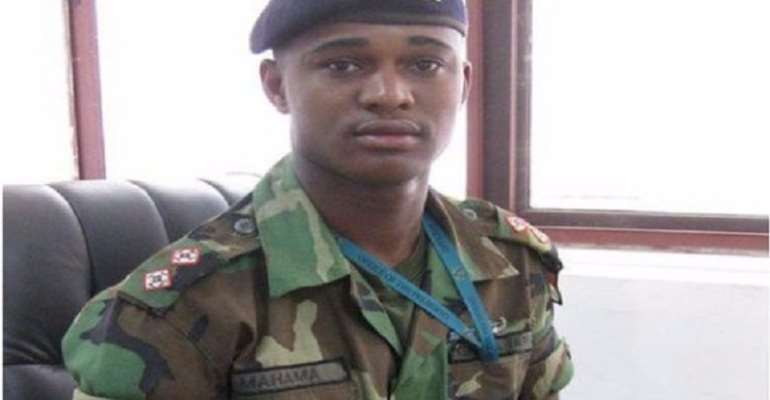 Introduction
As the nation prepares to lay to eternal rest the mortal remains of the young gallant Soldier, Major Adam Maxwell Mahama, whose vibrant life was cut short, I join all Ghanaians and the nation to pay a glowing tribute to this young talented individual. Indeed, his untimely and unfortunate death needs no recount as all the world are witnessed to this gruesome act perpetrated to this innocent Youngman, full of life.

I particularly commend the Government for honouring this son of Ghana with State burial, promoting him posthumously from Captain to Major and also, for instituting “GHc 500,000 Education Trust Fund for his children’s education”. It is also reported that the State will erect a monument in his honour, and according to the report, the family believes such “monument would serve as a reminder of the tragedy and a deterrent to the canker of mob justice in Ghana”.

Though these gestures are praiseworthy and deserve commendations, in my humble and personal opinion, the Greatest Tribute Ghanaians can give to this Illustrious Son of the land is to institute measures, policies and laws that aim at uprooting the twin cankers of both Galamsey and mob Justice in the country. In this, posterity will forever remember him and associate his demise with end of these two evils in Ghana. When this is done, pupils will recite it a poem right in school, while musicians will sing it a song. I must however, add that No amount of State honouring will be enough if in the coming days, months and or years, the family and especially the children grow up to see people end their lives through mob justice and or the Galamsey menace still flourishes. That to me, would mean that this young man has sacrificed his life in vain.

Indeed, the best time to institute tough and harsh measures to end these national threats is NOW!. History tells us that the unfortunate incident of 9/11 in US paved the way for the State to institute tough measures that curtailed ‘some’ individual freedoms and rights; something they wouldn’t have done prior to the September, 11. For once, US citizens were willing to sacrifice ‘some’ of their rights and freedoms, for the sake of their security.

Analogously, with the full national support at this time of the Major’s demise, Government of Ghana is presented the golden opportunity to act once and for all to end both Galamsey and mob justice, now or never. What the authorities must know is that this national sympathy will naturally die with time, the reason that the Government must act decisively, NOW!.

My tribute will be incomplete if I don’t take brief time to re-echo some concerns others have already raised on both Galamsay and Mob Justices. Because some of us aren’t privy to the report surrounding Major Mahama’s demise, we can but only speculate that it has to do with Galamsay or just a mistaken identity in a mob justice. With the report yet to be made public, it is yet unclear as to what motivated this heinous act of some residents of Denkyira-Obuasi in the Upper West Denkyira District of the Central Region. But what seems to be emerging through initial accounts of the incidence is that some elements of ‘Galamsay’ or ‘a mistaken identity in a mob justice’ could be present, hence the need to address them.

Mob Justice
I am sincerely of the opinion that a research must be occasioned into investigating why people get involved in mob justice. Is it the case that the trust in the existing justice system is eroded? Do people trust the Police and the Judicial system to expeditiously executive fair and uncompromised justice to suspected individuals the community arrest and present to them? If indeed, we are serious as a nation to uproot and eradicate ‘mob justice’ from our communities, first, a thorough investigation (via research), consultative and expert opinions must be sought. When the motives are known through research, then media and community sensitisation can be used in addressing them. Anything short of this, in my candid opinion, will lead to the business as usual “ hype when incident occurs and allows it to die off naturally”, without any proper investigations to guide the future.

Galamsey
There is no denying the fact that Ghana is a land of Gold. From the North, South, East and West, the precious metal is everywhere found. What this means is that if the threat of ‘Galamsey’ is not curtailed, then the entire nation will be doomed. But it must be admitted that the fight against the menace, is a never-ending fight that must involve the whole nation.

We are told that the term ‘Galamsey’ literally means ‘gather them and sell’. I recall growing up in an area where the Offin River passes, we used to gather tiny golden shiny particles believed to be gold anytime it rains heavily. So, the idea of ‘Galamsey’, is not of recent. What seems to be dangerous is the spate, and the kind of people engaged in this business. We often hear of Chinese nationals and other foreign nationals doing it. What may surprise many of us is that, there may be a University Lecturer, a Chief, a Politician, and even Pastors, etc, somewhere hiding but hiring these unemployed youth into working in Galamsey for them. We have even heard in time past that national security apparatus and the military service men were detailed to protect some ‘Galamsey’ operators. I am not in a position to verify these, but if they turn out to be the case, who is the real enemy of the State then? All of us, with our greed and no sense of minding what may become of the posterity!

So, the Government’s initiative to end this mad-rush for gold at the expense of the environment must be supported. But the authorities must be aware of the kind of Network and Institutionalised nature of this whole Galamsey business.

In all these, I sincerely believe that a proper national level investigations into this would unravel many mysteries. The Universities and other Research Institutes like ISSER must be involved in this fact-finding research.

As we ‘fight against the greedy men in high places’ using the ordinary people in the affected communities, we must not lose sight of the community’s plights. Many unanswered questions still remain: i) What has been the living conditions of the communities where the ‘formal’ mining companies have been operating for decades? (ii) Do these formal expatriate mining companies engage the services of the unemployed youth of the areas? (iii) Do they offer them educational training and sponsorship with the aim of engaging them in the mining business? OR is it the case that the mining and the few taxes these expatriate mining firms pay to the Government is for the nation but the full brunt of the negative environmental consequences are to be borne by the inhabitants?

On the foreign and local Galamsey operators, where do they sell their products? Do they pocket them and send them to their home country undetected by the customs officials at Kotoka International Airport? Do they sell on the local market? All these and many other lingering questions validate my earlier call for an in-depth research and investigations that can help tackle the problem of Galamsey from all angles.

As I conclude, I would reiterate that fact that not until we holistically address the issues of Galamsey and Mob Justice in Ghana, no amount of State honour of the Late Major A. Maxwell Mahama may be enough. The REAL TRIBUTES therefore would be that, every Ghanaian would say someday, Mob Justice and Galamsey are things of the past, thanks to the sacrificial death of this gallant young brilliant Soldier.

By Francis K. Ohene Agyekum
The Author is A Ghanaian Doctoral Researcher in New Zeeland