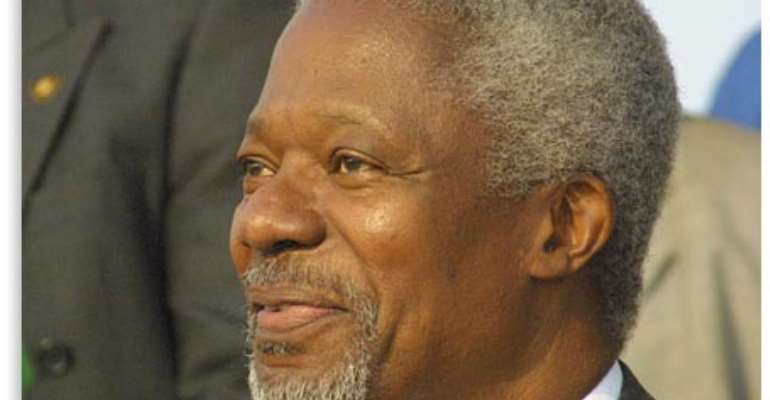 .... But Kufuor's brother seeks to replace him ... Akufo-Addo faction threatens to split SNIPPETS OF CREDIBLE intelligence picked up by GYE NYAME CONCORD suggests that some top brass of the ruling New Patriotic Party (NPP) have initiated moves to lure the highly respected Secretary General of the United Nations, Kofi Annan, to run on the ticket of the party for the 2008 presidential elections.

Kofi Annan's job as head of the global body is expected to end next year – December 31, 2006 – giving him enough time to anchor for the NPP job if he agrees to run.

The name of the respected Ghanaian is being touted as a possible redeemer of the NPP in 2008, following the belief that his candidature could counter that of the respected, but twice-defeated, presidential flag-bearer of the NDC, Professor John Evans Atta Mills.

Mills would run for the third time if advocacy by some leading members of the main opposition National Democratic Congress (NDC) to maintain him is successful .

Credible but unconfirmed reports suggest that President Kufuor is privy to the head-hunting game, but his Press Secretary, Mr Kwabena Agyei Agyepong, told GYE NYAME CONCORD when reached on phone yesterday, that he was unaware of such moves.

“I've never heard of anything like that”, he tersely said.

But deep throat sources say Annan's ticket is also expected to serve as a counter to Mills' Fante background and a possible turn-around by the Central Region if he is maintained.

Though the respected NDC flagbearer lost massively in his own home region in the 2004 elections, many analysts and NDC insiders insisting on his retention for the 2008 ticket, say the Central Region would not repeat what some term a “mistake” with Mills again.

The need for a Fante to counter his ticket has for some NPP insiders become a matter of necessity, following the growing strength of the NDC, which polled a credible 44.64% of the total ballots against the NPP's 52.45% per cent.

Others have also warned that with the present economic difficulties likely to continue into the rest of the second term of the Kufuor presidency, the NDC could either regain or retain the votes it garnered in other regions and also pull in the Fante votes to do the trick for them.

A Fanti, Kofi Annan was born in Kumasi on April 8, 1938 and began his first degree at the University of Science and Technology in Kumasi, from where he proceeded to complete his undergraduate work in economics at Macalester College in St. Paul, Minnesota, U.S.A., in 1961. From 1961 to 1962, he undertook graduate studies in economics at the Institut universitaire des hautes études internationales in Geneva. As a 1971-1972 Sloan Fellow at the Massachusetts Institute of Technology, Mr. Annan received a Master of Science degree in management.

He began his first term on 1 January 1997. On 29 June 2001, acting on a recommendation by the Security Council, the General Assembly appointed him by acclamation to a second term of office, beginning on 1 January 2002.

UN records indicate that he joined the “United Nations system in 1962 as an administrative and budget officer with the World Health Organization (WHO) in Geneva. Since then, he has served with the UN Economic Commission for Africa (ECA) in Addis Ababa; the United Nations Emergency Force (UNEF II) in Ismailia; the Office of the United Nations High Commissioner for Refugees (UNHCR) in Geneva; and, at UN Headquarters in New York, as Assistant Secretary-General for Human Resources Management and Security Coordinator for the UN System (1987-1990) and Assistant Secretary-General for Programme Planning, Budget and Finance, and Controller (1990-1992).

But while some within the top brass of the NPP push their campaign to poach him for the party, the campaign for the next flagbearer of the NPP is revving up, with unofficial presidential aspirant's campaign offices being discreetly established.

News of plans by Dr Kwame Addo Kufuor, younger brother of President Kufuor and Minister for Defence, to succeed his brother and boss, seem to be generating some excitement and worries within the party and the general public.

Insiders say his campaign is picking steam and that his desire to succeed his brother is becoming stronger by the day. He is yet to formally announce any interest in the presidency or deny reports of his interest in the media.

Meantime, some supporters of one of the few front-liners, Nana Addo Dankwa Akufo-Addo, have privately hinted this paper that they would be willing to break away from the ruling party if attempts are made to impose Annan on them.

Other key NPP insiders say Iron Lady Madam Hawa Yakubu, defeated MP for Bawku Central and former ECOWAS MP/Minister of Tourism, who announced her interest to file for the race a little over a week ago, may pull out at the last hour and throw her support behind Akufo Addo.

Hawa is the first to formally announce her interest in the 2007 race (an amendment is expected to change the present 2006 date to 2007), which is expected to feature a host of prominent party stalwarts, including Mr Allan Kyeremanteng, Hon Osaafo Marfo, Prof. Mike Ocquaye, Hon. Kwamena Bartels, Dr Kofi Konadu Apraku, Courage Quashigah and possibly Papa Owusu Ankomah.

The natural stakeholder to the flagbearership, Vice President Alhaji Aliu Mahama, early this week shot down a report alleged by the Veep's aide, Alhaji Mohammed Awal, to have been inspired by Madam Hawa Yakubu, which suggested that he had given up possible dreams of running for the post.

He however failed to also express any interest, indicating that he was so far concentrating on aiding the Kufuor administration to succeed in its socio-political and economic aims.

Hawa Yakubu has however denied being behind the Chronicle report.

Other presidential aspirants for the NPP 2008 ticket include at least two deputy ministers who have hinted friends of their desire to file their nominations for the 2008 race, one of whom has already started floating a private weekly newspaper. Keep reading.

Group demand justice for Fulani who died under mysterious ci...
58 minutes ago