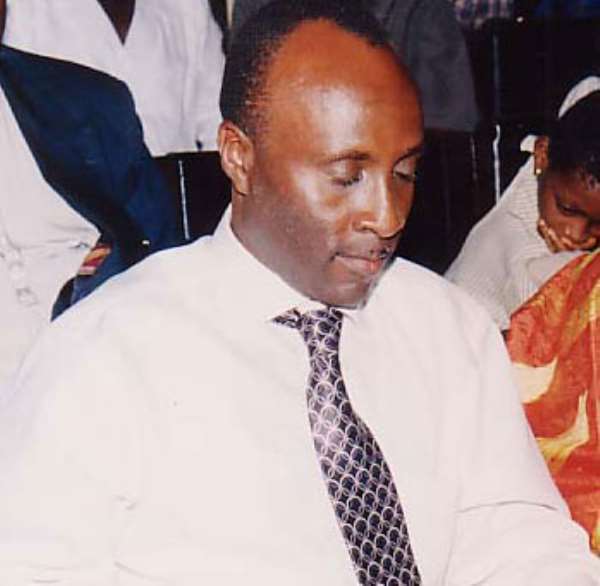 The publisher of The Chronicle, Nana Kofi Coomson has announced that beginning from July this year, he will begin the organization of free vacation classes for JSS three and SSS students in the Effia Kwesimintsim and Takoradi metropolis.

According to him, for the exercise to take off successfully, he had decided to recruit about thirty well-qualified tutors from the various secondary schools in the metropolis to handle it and it would be an annual affair.

He spoke also of skills acquisition for those who do not find formal education their cup of tea and they would be helped to acquire skills like welding and plumbing.

He noted that he was born and bred in Effiakuma, near Takoradi and that the free vacation classes was his contribution toward the upliftment of education in the metropolis and the western region as a whole.

Coomson disclosed this in an interview he granted the press at the belated mother's day party he organized for his mother, Madam Rose Arthur alias Esi Yakoba and all mothers in and around the Takoradi metropolis last Saturday. By conservative estimation, about one thousand mothers, including queenmothers attended the party which was held at the Valley Beach Hotel and ran deep into the night.

Apart from the gastronomic treat, which the mothers enjoyed at the party, they danced to melodious tunes provided by Mr. Kwame Amponsah, a Takoradi-based gospel musician. Among the women were the publisher's septuagenarian mother, Madam Rose Arthur and the deputy western regional director of health services, Dr. Linda Vanotoo who chaired the function, Mrs.Tina Mensah, the NPP Women's Secretary, Sky FM'smother of the Year and Western regional director of the Ministry of Women's Affairs, Mrs.Edna Nyame, the Chief of Whendo, Teacher Essien, The Marketing Officers of Ecobank, Mr. Yankey, and Cash transfer business who both spoke on the importance of saving for the rainy day.

Also present at the party, were some leading members of the New Patriotic Party (NPP) and some sympathizers of the National Democratic Congress (NDC) and the Convention People's Party (CPP). Others traveled from as far as Kumasi, including "Captain" Emmanuel Bosomtwi.

The delighted Coomson further told the press that he had already sought permission from the Ghana Education Service (GES) to allow him to use their facilities such as classrooms to carry out the exercise.

He said he was inspired by the distinguished example of a 31 year-old teacher of Ghana National College Mr. Edwin Buckman of Cape Coast who started a similar scheme in Cape Coast and whom he drafted to help him design the scheme for Takoradi and the Effiakuma area. Mr. Buckman spoke about the importance of education.

He noted that the tutors that comprised 23 for the SSS exercise and seven for the JSS three students, would be well catered for to enable them provide quality service to the students.

According to The Chronicle publisher, he had already set up a schorlaship scheme for SSS students in the metropolis. The scheme, which he named after his late father, Mr. J. S. Coomson, caters for at least ten students each academic year.

Coomson mentioned the former president of the Ghana Journalists Association (GJA) and now a member of the Council of State, Mrs. Gifty Afenyi Dadzie and Managing Director of Ecobank Ghana, Mr. Albert Essien as patrons of the vacation classes which he has dubbed "Coomson Private Initiative".

He mentioned also the Valley Beach Hotel owned by him, the Ghana Manganese Company (GMC) and Takoradi Flour Mills Limited as corporate entities that had agreed to come with him to sponsor the free vacation classes in the metropolis.

Coomson added that apart from the free vacation classes, he intended to set up a Susu scheme mainly for the metropolis in a matter of weeks.

He said the scheme would also have a component of advancing loans at attractive rates to people who could otherwise not be able to get bank loans.

"Let me be honest with you, but for the salary of the staff who are going to handle the scheme, I would not have charged a penny on the loan that would be advanced to these people," he said and added that pictures that would be taken for the registration exercise would be free of charge. Indeed, about three hundred mothers who attended the party had their passport-sized photographs taken free of charge for the Susu registration exercise.

When asked about what he had for students living in Sekondi and Shama, which is part of the metropolis, Coomson said for now, the concentration is on Effia Kwesimintsin where he was born and Takoradi.

He however said students from Sekondi and Shama who are desirous to join the free vacation classes could do so provided they have the means to come to Takoradi.

On the issue of whether he had the intention to contest the Effia Kwesimintsim parliamentary seat, Kofi as he is popularly called by his workers said his name had come up several times but at the end of the day, it fizzled out.

He however said whether he would contest this time round or not, he himself did not know. He added nevertheless that when the time came, he would cross the bridge.