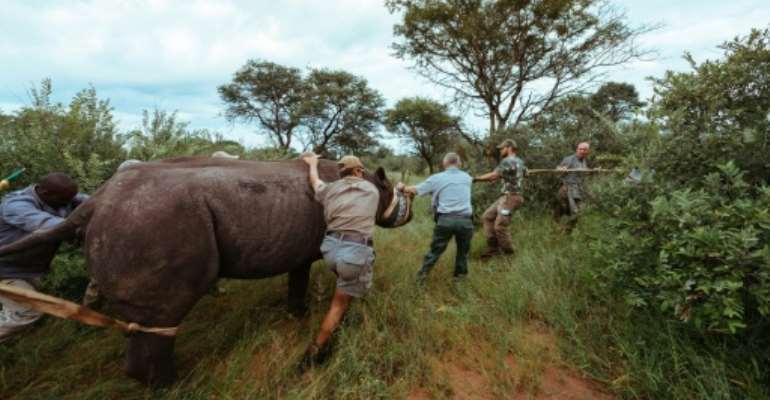 A conservationist was killed in Rwanda by a black rhino while working to reintroduce the animals. By Lindsey TAINTON (African Parks/AFP)

Kigali (AFP) - A conservationist who was training rangers to track and protect black rhinos in Rwanda has been killed by one of the animals, the organisation he worked for has said in a statement.

Information about the exact circumstances of Hungarian Krisztian Gyongyi's death on Wednesday morning in Akagera National Park is "still being gathered", said Peter Fearnhead, the chief executive of Africa Parks.

"(This is) a huge loss for all who knew Kris and for rhino conservation across the continent," said Fearnhead, who sent condolences to Gyongyi's family.

Gyongyi, a married father of one, had been helping reintroduce the black rhino into Akagera National Park while also working on a PhD on the conservation of the animals in Liwonde National Park in Malawi since 2012, the park said.

Black rhinos disappeared from Rwanda in 2007 due to poaching but were reintroduced into the country in May after 20 animals were sent from South Africa to Akagera National Park.

Only about 1,000 East African black rhinos live in the wild, out of a total population of less than 5,000, according to African Parks.

"This is a tremendous loss for all of us, especially for rhino conservation efforts in Africa" said Fearnhead, paying tribute to Gyongyi.

Gyongyi's wife and daughter have been informed of his death.