Drama in Parliament: Ken Ofori Atta hits back at Minority over $2.25bn bond 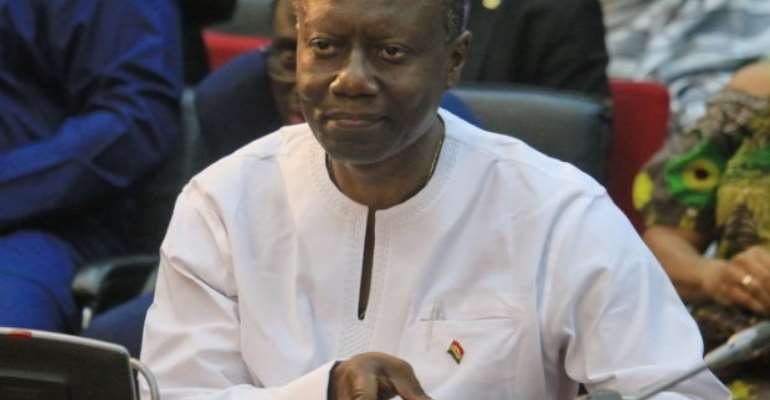 There was drama in Parliament over whether the Finance Minister must present a document before he will be allowed to make a statement on the controversial $2.25bn bond issue.

The Minority Leader Haruna Iddrisu insisted that the Minister, Mr. Ken Ofori-Atta who was on the floor of Parliament, ought to furnish the House with all the necessary documentation before being allowed to speak on the matter.

But the Majority Leader Osei Kyei-Mensah-Bonsu in a rebuttal stated the half hour motion moved by the Minority last week demanded that the Minister makes his statement and then provide any documentation as may be necessary.

After more than 15 minutes of haggling between the two leaders of the House over the format of the minister’s answer to the House, the Speaker of Parliament Prof Mike Ocquaye ruled that the Minister must give a statement first and then table any other relevant document to the House afterwards.

In his rather unusual blue suit and red tie, markedly different from the traditional white attire he has come to be identified with, the Finance Minister took over the House with an overview of what he said was a debt-ridden economy inherited by the Akufo-Addo government which steps had to be taken to save from collapse.

He said as part of the debt management strategy announced in the budget in March 2017, the government on April 3, 2017 issued two bonds and opened two other bonds both cedi-denominated.

Quoting a report by Reuters, the Finance Minister Ken Ofori Attah said the $2.25 billion bond was the biggest ever to have been issued and was a huge success for a country reeling under heavy economic challenges.

The Minister was answering a half hour motion moved by the Minority Leader Haruna Iddrisu which demanded an explanation on the controversial $2.25billion bond issued in March-April this year.

The minority claimed there was a conflict of interest situation in the issuance of the bond because one Trevor G. Trefgarne, who represented Franklyn Templeton, the company that bought a chunk of the bond issued in April was a director of Enterprise Insurance.

Enterprise Insurance also had the Finance Minister, Ken Ofori Atta as a director.

But in the response on the floor, the minister said there were no breaches in integrity during the transaction, insisting that any such allegation of integrity deficit is borne out of lack of understanding of the transaction.

He said the bad mouth, empty allegations surrounding the bond issue could rather have an adverse impact on investor confidence in the economy.

According to him, the Akufo-Addo government inherited from the Mahama administration an economic paradigm of “borrow more and tax more” which worsened Ghana’s precarious economic challenges.

He said the new government had to think outside the box and execute a new debt management strategy that will arrest the sliding economic fortunes.

He was surprised at the attempts by the Minority to scandalise the strategy using the $2.25billion bond issue as fodder.

In their attempt, the Minister said the Minority claimed all the bond was sold to one person, Franklyn Templeton but was quick to draw their attention to the fact that Franklyn Templeton was not a human being but an institution which has over the years bought several bonds issued under the Mahama-led administration.

He also dismissed claims the bond was issued in secrecy, insisting all partners including the book runners - Barclays, Stanbic Bank and SAS - managed the process.

These book runners, he maintained, were engaged by the previous government for similar bond issues.

He dismissed claims of impropriety anchored on the fact that a foreign firm, Franklyn Templeton, alone took up 95 percent of the bond.

Mr. Ofori-Atta said 90% of a 10-year bond issued in November 2016 by the previous government was taken up by foreign firms and that the transaction under him was no different.

He said there was not doubt that the current managers of the economy have a wide network of friends and institutions across the world, maintaining this network will be explored for the benefit of the economy without fear or favour.