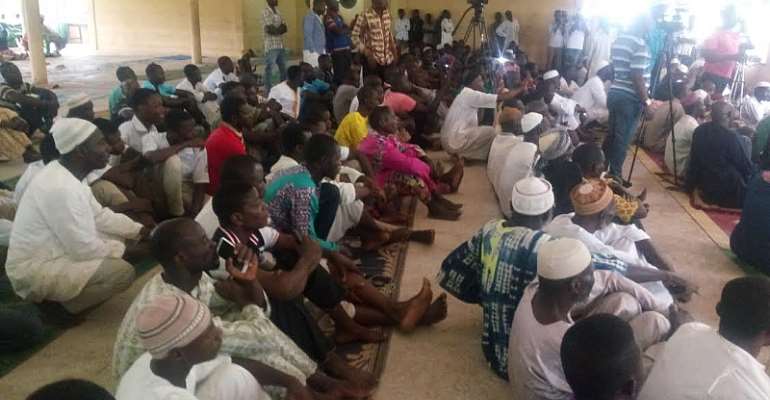 Some of the Muslim worshippers listening to the the Veep

The Vice President, Dr. Mahamudu Bawumia has indicated that the current government of the New Patriotic Party (NPP) is poised to ensure a stress free Hajj pilgrimage for Ghanaian Muslims this year.

“The current NPP administration is putting in measures to ensure a smooth Hajj pilgrimage for those who will make the trip this year”, he pointed out.

Hajj is the fifth and final pillar of Islam, and it is an obligation for every Muslim to undertake at least once in their lifetime if they can afford it and are physically able.

An average of 10,000 Muslims leave Ghana every year to Saudi Arabia for the Hajj programme. However, over the years some Muslims in Ghana struggled to undertake the sacred trip due to myriad of challenges that sometimes characterized the process.

According to Dr. Bawumia, the government is committed to ensuring that this year's pilgrimage comes off without the hitches that had associated with the process in the past.

The Vice President was in the Western Region on Saturday for a day's visit to interact with the Muslim community at Shama, Agona-Nkwanta and Takoradi, all in the region.

It was his maiden visit to the region after the New Patriotic Party (NPP) won the 2016 general elections.

He told the worshippers “After the prayer and fasting this month, we will be preparing to leave for Hajj. We have instituted some measures to make this year's pilgrimage a smooth one”.

He continued “We will prompt you before you get to the Hajj village by sending text messages to all who applied for this year's pilgrimage”.

“This is to remove all challenges that have been associated with the process in the past particularly converging at the Hajj village when it is not your turn to board the plane.”

Zongo Devt Fund The Vice-President pointed out that in the government's first budget, it provided GH¢219 million for the Zongo Development Fund.

“President Nana Addo Dankwa Akufo Addo has also given an assurance of the government's commitment to begin paying Arabic tutors this year, while working towards making Arabic examinable at the junior and senior high school levels”.

This, he said was in appreciation for the “overwhelming support” the NPP received in the 2016 polls, particularly from those in the Zongos.

Dr Bawumia also assured the parents that the government's free Senior High School programme would commence for new students in September this year.

He therefore admonished Muslims to try and co-exist so their children could benefit from the Free SHS programme.