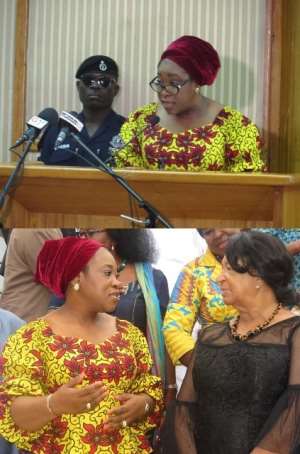 Accra, June 5, GNA - Madam Shirley Ayorkor Botchway, Minister of Foreign Affairs and Regional Integration, has directed the re-establishment of the Economic, Trade and Investment Bureau (ETIB) at the Ministry.

She explained that the re-establishment of the ETIB would realign the Ministry's objectives to achieve the Government's Economic Diplomacy Agenda.

She said there was no doubt that one of the main tools that would be employed by the government to achieve its foreign policy objectives was Economic Diplomacy.

'It is all about re-directing the focus of our diplomatic activities to reap economic benefits that will impact positively and raise the standard of living and welfare of the Ghanaian people,' Mrs Botchway remarked on Monday in Accra during the opening of a five-day seminar for newly appointed Ambassadors and High Commissioners.

'The implication is that we must pay greater attention to the promotion of trade, investments and tourism inflows into the country,' she added.

She said the new Bureau under a Senior Director would coordinate all the economic, trade, tourism and investment promotional activities of the country in conjunction with the Ghana Missions abroad and in collaboration with the Ministries, Departments and Agencies (MDAs) and other stakeholders in Ghana.

The orientation seminar, which is being attended by over 20 new envoys designate, was designed to enable them tap into the country's rich pool of highly-experienced and skilled Foreign Service Officers for the benefit of all the participants.

She said the MDAs would include but would not be limited to the Ministry of Trade and Industry, the Ghana Investment Promotion Centre, the Ghana Export Promotion Authority, the Private Enterprise Foundation, the Ghana Chamber of Commerce, the Ghana Cocoa Board and the Ghana Association of Industries.

Mrs Botchway said Ghana's Diplomatic Missions and envoys abroad would therefore, be mandated not only to sell the country abroad but also to vigorously market the incentive that Ghana offers to potential foreign investors.

'You will also be required to leverage Ghana's democratic and governance credentials, respect for the rule of law, the peace and stability of the country for the past two decades to engender international goodwill and solidarity in order to attract trade, investment, scientific and technological transfer among other areas of critical endeavour for the development agenda of the country,' she stated.

'The role of the Heads of Mission will be critical in this endeavour. But in this quest, you should be mindful to attract genuine investors and tourists into Ghana and not those who will subvert our economy, destroy our environment and pollute our culture and national moral fibre,' she added.

She said Economic Diplomacy also included; conducting trade intelligence, obtaining phytosanitary, regulatory and import requirements of your respective countries and bringing to Ghana, partners who were willing to add value to our raw materials.

She noted that in the search for wider markets, the envoys must also especially pay attention to intra-African and Afro-Asian trade.

She said the dynamics of the world economy had changed dramatically over the past two decades with particularly the South East Asian countries now a theatre of fierce competition for trade and investment even from the advanced countries.

She urged those envoys, who were heading towards the Asian countries to re-double their efforts in order to take advantage of the immense benefits that Ghana could derive from these countries particularly the Asian tigers of South Korea, Singapore, Taiwan Malaysia, Indonesia and the BRICS countries of Brazil, Russia, India, China and South Africa for Ghana's socio-economic transformational agenda.

She said the Ministry had prioritised a number of Missions for serious and comprehensive rehabilitation, outright purchase or construction of new properties subject to the release of funds this year; adding that 'fortunately, the Ministry has secured a $50 million bridge facility from Societe Generale for this purpose'.

Among the dignitaries, who graced the occasion were the two Deputy Foreign Ministers Mr Charles Owiredu and Mr Mohammed Habbib Tijani, and the Acting Chief Director of the Ministry, Mr Albert Francis Yankey. GNA