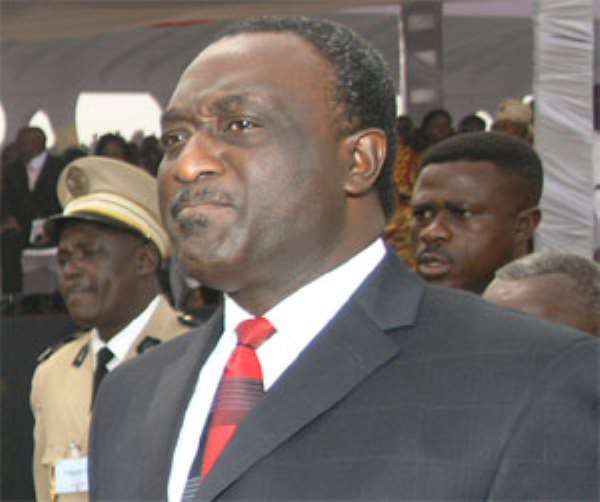 Coy absconds with ¢834m ADB cash ... disappoints Prez. Kufuor Tuesday, May 17 (Chronicle) --GhanAmer Farms Company (GhanAmer), the Atlanta based company believed to have been introduced to the African Development Bank (ADB) by the Castle lords to take over the biggest cotton company in Ghana, the Ghana Cotton Company Limited (GCCL), has absconded with $90,000 belonging to ADB.

Following the abrogation of the contract between ADB, the largest shareholder of GCCL, and GhanAmer, the latter refused to make accountable to ADB but took away $90,000 of the $167,000 that was transferred from GCCL into the United States account of Mr. D. J. Miller, the managing director of GhanAmer.

The contract was abrogated as GhanAmer, the strategic investors that were supposed revive the deplorable GCCL by injecting money into the company, failed to inject $3million for last year's operations.

Chronicle gathered that the Country Manager of GhanAmer, Mr. Rashid Nuri, resurfaced at GCCL, allegedly with the intervention and influence of the President, after he was booted out of the offices of GCCL, following GhanAmer's failure to inject over ¢4 trillion ($45million) to support GCCL's operations since it took over the company in May, last year.

The paper learnt that GCCL, since its establishment, gradually picked up in its operations and reached its peak between 1992 and 1997.

Even though the operations of the company were financed through loans from ADB, it had paid off all debts to ADB by the end of the 1997 season.

However, while GCCL prepared itself to stand on its own with little financial support from ADB in the ensuing years, tragedy struck, when the world price of lint cotton fell from as high as $1,600 per metric ton to as low as $800 per metric ton, the lowest price in the history of the cotton industry.

The result was the continued dependence of GCCL on ADB for financial support until 2001 when ADB withdrew its support for the entire cotton sector due to its over exposure then to the sector, leaving the company with no option but to finance its own operations through forward sale of its lint up to the 2003 season.

However, there was a ray of hope when the world market price improved last season.

The welcome news was boosted by the possible injection of working capital into the company's operations for increased production, when Mr. Miller in his maiden and only visit to the farmers and staff of the company in Tamale and Bolgatanga announced the takeover of GCCL and assured them that all would be well in the ensuing season and hopes of all stakeholders of the company were revived.

Farmers were encouraged by the good prices fixed for seed cotton and staff determination to work hard to turn things around for the better was taken for granted before the start of the 2004/2005 crop.

Chronicle investigations revealed that under the agreement, GhanAmer was to pay $15million, which was to be paid as follows, at the end of the fourth year from the date of acquisition of the shares; GhanAmer would pay to GCCL shareholders pari passu $3.5million.

For five years after the first anniversary of the payment date of the $3.5million, GhanAmer would pay to GCCL shareholders $2million each year.

On the sixth anniversary of the payment of the $3.5million, GhanAmer would pay to GCCL shareholders $1.5million.

GhanAmer also indicated their intention to invest $40million in the company over the next three to five years, which would bring the much needed and otherwise unobtainable capital to the company to expand its operations.

The paper learnt that when GhanAmer was given the baton to manage GCCL then the company began to find it difficult to pay for services, such as land preparation, transport services, resulting in heavy outstanding bills of over ¢4.5billion as at the end of August, last year.

Also it was unable to provide fertilizers, insecticides appropriately and timely, lack of local and imported spares for ginnery servicing.

The Information Technology Manager, Mr. Abdul Rahaman, told the Chronicle, that GCCL was making all efforts to retrieve the money that was in the custody of GhanAmer.

He stressed that GCCL was preparing a legal action against GhanAmer to compel it to bring the money as soon as possible.

Earlier, the Deputy Managing Director of ADB, Mr. E. Boakye-Agyemang, in an interview, noted thsat the abrogation could not cost GCCL any havoc since ADB had already been responsible for GCCL immediately it was identified that GhanAmer was not capable of investing in GCCL.

He assured that all efforts were being made by GCCL to retrieve all the monies that were transferred to the USA accounts of GhanAmer.