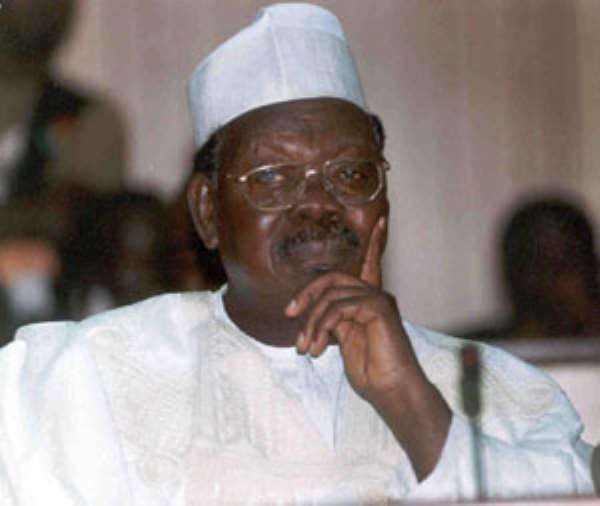 Saayoo' Over 'Chop Chop' At Makola TENSION IS mounting at Accra's pioneer trade centre, the Makola Market, over an alleged misappropriation of over ¢500 million by one of its leaders, Madam Yemoteley Quaye, sister of Greater Accra Regional Minister, Sheik I. C. Quaye.

The simmering situation is over accumulation of tolls collected for the use of toilet and other facilities at the market.

According to Madam Margaret Akrong, chairperson of the Makola Market Traders Association, who revealed this to GYE NYAME CONCORD, Madam Yemoteley Quaye has blatantly refused to account for the monies for the last five years she took over the affairs of the facilities. All attempts to make her accountable to the market authorities have also been thwarted.

She told this paper that not even the intervention of the first lady, Madam Theresa Kufuor, could persuade Madam Yemoteley to account for the funds “because of the support she wields from her brother, Sheikh I. C. Quaye.”

“Madam Yemoteley Quaye has still ignored the orders of the First Lady and is still going on taking monies from the Market because the brother (Hon. Sheik I.C. Quaye) is supporting her”, Mrs. Akrong stressed.

Continuing she said “they are saying that the current government is their government so they have every right to chop the monies generated from the market”.

“Madam Yemoteley Quaye brought in the police and macho men to arrest people, she brought her brother's bodyguard in the person of Alhaji Alhassan to assist in the arrest. In fact they molested those of us who opposed her”, she noted almost in tears.

What she is more biter about is the fact that the association uses monies generated from the toilet and the other facilities to pay its debt and to run affairs of the market.

Mrs. Akrong said her outfit reported the matter to the Accra Metropolitan Assembly (AMA) Chief Executive, Stanley Nii Adjiri Blankson, who earlier on seized the keys to all facilities in the market from the association but has since given them back to Madam Yemoteley Quaye and her group.

She said members of the Makola Market Traders Association disagrees with Adjiri Blankson's decision, “because the Mayor told the Association that he will release the keys only if the factions settle their differences, but Yemoteley and her group still have access to the facilities”.

She also disclaimed the assertion that Madam Yemoteley is the Market Queen, saying she was just the interim chairperson for the New Patriotic Party (NPP) women's wing in the market. Even with that position, the First Lady Madam Theresa Kufuor, has asked her to step down, she claimed.

Contacted, the organiser of the market association, Mrs. Rosemary Laryea corroborated her chairperson's story and lamented over why some people always want to bring politics into the affairs of the market. She alleged that Madam Yemoteley is very famous for that.

But in her response to this paper, Madam Yemoteley bemoaned what she said was a move by members of the Makola Market Traders Association to tarnish her reputation, claiming that there was no iota of truth in the allegations.

She told the Gye Nyame Concord that she only took over the administration of the market facilities in October last year when the Association had run the facilities down and left a debt of ¢18 million in water bills.

Though she could not tell how much has been accrued over the period of her stewardship, she said tolls from the facilities are used to solve problems that may occur in the market as has been directed by the sub-metro, which handed the facility to her union.

“The members of the so-called Makola Market Traders Association are all bunch of liars whose membership are mostly retired market women who have no stalls in the market and want to annex the facilities in the market because they say it's their government which provided them”, Madam Yemoteley fired back.

“These people are the same people who wrote the petition to Parliament against the Regional Minister (Hon. Shiekh I. C. Quaye) during the Ministerial vetting” in an obvious attempt to destroy him,” she alleged, insisting that “I have never collected any facility from any association. They were given to me by the AMA”

Madam Yemoteley Quaye also denied imposing herself as the Market Queen, explaining that there was a leadership vacuum within the market after her party's electoral victory in the 2000 general elections.

“The market women then decided to make me their leader to run the affairs of the market”.