Mob Violence: Ghana Is Up There With South Africa 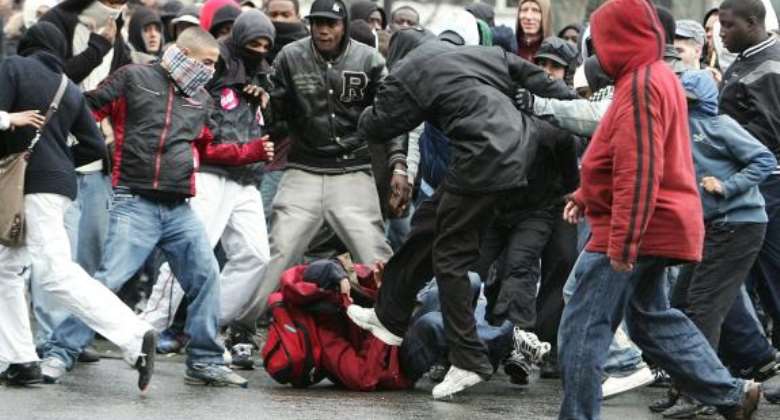 South Africa gained a reputation in recent years as a hotbed of mob violence in Africa, thanks to the bloodthirsty hoodlums whose periodic xenophobic rampages against African migrants shocked the world. But that dubious distinction is on the verge of passing from South Africa to Ghana. The socially destabilizing phenomenon is now as much a problem in Ghana as it is in South Africa.

Lynch mobs are increasingly becoming an unsettling social issue in Ghana. Every now and then instant justice is meted out to someone in communities both large and small across the nation, the latest example being the lynching of an up and coming young army officer in the Denkyira district, Captain Maxwell Mahama. The young officer, father of two, was callously murdered despite making his military identity known to his assailants.

Besides killing, the vigilantes in Ghana are often prone to actions that show how degenerate they are, actions that demonstrate their total lack of common human decency; in other words, they have a capacity for evil beyond imagination. To illustrate this point, not too long ago in Kumasi, a woman was accused of theft by some vendors.

A crowd quickly gathered, set upon the poor woman, beat her mercilessly, stripped her naked, pushed her onto the ground, spread her legs wide open and men, demonstrating just how cruel and depraved they could be, stuck the tips of their shoes and their fingers into her genitals. Not even animals in the wild would subject one of their own to such savage and dehumanizing abuse.

Miraculously, the woman came out of this harrowing ordeal alive, but whether she can overcome the psychological trauma resulting from

her dreadful experience is another matter.
The most frustrating thing about all this is the impunity the perpetrators seem to enjoy. Seldom, if ever, is anyone punished by the authorities for such egregious crimes. The criminals commit their crimes and simply walk away - free. Conventional wisdom rationalises the absence of judicial sanctions for vigilante crimes on the assumption that the victims are all armed robbers.

Obviously, that is an exaggeration. Captain Mahama was certainly not an armed robber. The lady in Kumasi who was stripped naked in public and degraded did not even carry a screwdriver, much less a knife or a pistol in her handbag. She was the antithesis of an armed robber. And her experience was hardly an isolated case.

Lynch mobs are getting a free pass in Ghana.Yet
at the height of the xenophobic violence in South Africa, Ghanaians made much of the failure of the South African authorities to prosecute the vigilante groups. How is the absence of punishment for those who engage in mob violence in Ghana any different from the nonchalant attitude of the government in Pretoria toward its own criminals?

Vigilantism undermines the rule of law; it is a surefire way for a nation to dissolve into total anarchy. Vigorous enforcement of the law is the only way to combat the menace. While there is no denying that armed robbery poses a real and present danger to society, mob violence, left unchecked, could easily rival the former as a major destabilizing factor in Ghana. Somalia should always serve as a tragic reminder to Ghanaians that the rule of law must never be taken for granted.