NDC To Opt Out Of CJA -Free Press 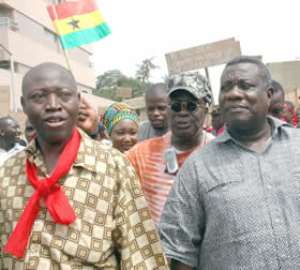 Top level sources within the National Democratic Congress (NDC) have confirmed to the Free Press that the party would withdraw its members from the committee for Joint Action, (CJA) organisers of the Wahala demonstrations soon. The sources, who spoke under conditions of strict anonymity, indicated that the NDC was committed to taking part in the next series of "Wahala" demonstrations scheduled to take place at Kumasi, Techiman, Sunyani Bolgatanga but after that they would advise themselves. The source revealed that the order for the withdrawal from the CJA came from the founder and leader of the party ex-president J.J. Rawlings. Giving reasons for opting out of the CJA the source stated that even though the CJA was an NDC masterminded operation to put political pressure on the NPP administration, it has now been hijacked by certain individuals from the minority parties and the NDC had lost control over it agenda. The source noted that initially, the other opposition parties were roped into the CJA to give it the semblance of a united opposition but unfortunately the members of the other parties have now taken center stage of the Wahala demonstrations and sidelining the NDC members. The source noted that the ex-president was not comfortable with the prominent role being played by some non-NDC members, especially Kwesi Pratt, Danny Ofori Atta of the Egle, Alhaji Ramadan of the PNC and Emelia. Arthur of the NRP and was also not comfortable in the shift in focus from personalities to issues. The source pointed out that the ex-President has also not forgiven the CJA for denouncing him when during their second Accra Wahala march, where he compared President Kufuor to Atta Ayi.