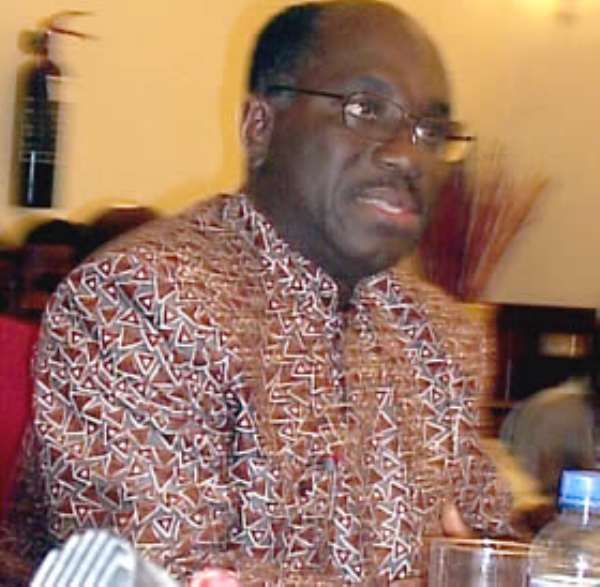 The woes of embattled Ghana's minister of transport, Richard Anane seem unabated after more revelations that he lied to Parliaments appointments' committee. The first donor was shocked and his voice was trembling.” I am a poor man I don't have that money to give as a gift, he says. The second 'donor' was very tetchy and almost angry,” Bring me transcripts from parliament indicating that he said it was a gift to you” he screamed on the phone. 'Donor' number three is called Vivienne Adae Mensah. She is a young lady who single- handedly transferred $7,000 out of the disputed $ 90,000.

In America she squats from in a low class student's hostel and was a student at Lincoln University in Missouri.

The first donor to refute the claim that he was sponsoring Dr Richard Anane's secret family on America as a friend is called Mr. Ebenezer Tetteh Quaynor. Out of the disputed $ 90,000, which was sent to Alexandra, he transferred $ 2,000.

“This is forgery, I haven't sent that amount as a gift, I am not that rich. Even my pay doesn't reach that amount. I don't know who is Dr Richard Anane,” Dr Quaynor says.

“I don't know where my father can get that amount of amount from. This is fraud, Mr Quaynor's daughter, Reggie also screamed from on phone.

Mr Quaynor does not know Alexandra; neither does she know Dr Richard Anane so how come he wired over $ 3,000 to Alexandria's account? BOOM CAME THE CLUE After several minutes of sober reflections and checking with his banks, Mr Quaynor dropped a clue that the money was most possibly given to him by a Ghana Airways pilot called Captain Paul Fordjuor who dropped from a Ghana Airways flight.

Captain Fordjuor admitted knowing that Mr Quaynor very well but added that he couldn't immediately remember whether he indeed, gave that money or whether somebody sent the amount from Ghana but decided to use his name to persuade Mr Quaynor to accept it and transfer to Alexandra.

When probed further it emerged that Mr Quaynor was a staff of Ghana Airways in the US.

“You see over there in Ghana Airways people use my name for some of these things, it is possible somebody sent the money to him directly and knowing that I knew him must have told him that I asked him to transfer the money to the said person”, Captain Fordjuor says.

He was probably the toughest to interrogate, but it emerged that even before the vetting, a phone meeting had been arranged between him and some officials of the vetting committee.

For some reason he was very dodgy: he refused to say whether Dr Richard Anane was reimbursed for the over $8,000 that he put in Alexandra's account or not.

During a telephone exchange between Alexandra and Mr Boateng via conference call, Mr Boateng says, “ I gave you that money on behalf of Richard for your son, whatever arrangement I had with Richard is between me and Richard. It has nothing to do with you. Put it on record, I have not used the word gift the word gift has not come out of my mouth”.

“But Dr Richard told Parliament that these monies were gifts to me on his behalf from his friends”, Alexandra said on phone.

“If Richard says he gave it as a gift, let Parliament sent me transcripts and I will respond” Boateng replied.

Aside his donors some documents which indicate that Dr Richard Anane, in 2002 was transferring monies to Alexandra on March 10m 2002 and from London in November. THE BIG CLUES Using a tip off from Mr Quaynor's claim that money was handed over to him in cash from a pilot from Ghana, It turned out that some of the money sent to Alexandra was not going to the banks, but was handed over to travellers and Ghana Airways passengers as well as staff.

In an interview, Alexandra admitted that she received several sums of money from Richard through Ghana Airway's office in Washington.

According to Alexandra Collins Duodo- Bonsu was assisting Richard in getting the money to me by many means, including picking up $10, 000 USD cash from Ghana Airways back office in Baltimore, Maryland.

“I was told to meet one Captain Kwakwa coming off a flight but instead was routed to the back offices to wait for Mr Obed. Another man named Eric counted and handed me cash from the safe” she says.

According to investigations, Collins Duodo-Bonsu was then a personal assistant to Dr Richard Anane.

Currently Collins operates a company called Corporate Travel. He was also associated with a company called PALB Pharmaceuticals. He was not available to answer questions as he was said to have travelled to London.

Then came three secret tapes-two from Dr Richard Anane, the other from one J. Owusu, a man who was then working with the Ministry of Transport and at the same time doubling as lawyer for Dr Richard Anane.

Mr Owusu was later appointed as Chief Executive Officer of the Vehicle Examination and Licensing Division, which I sunder the Ministry of Transport.

Insiders see Mr Owusu's appointment as a reward for fighting Alexandra on behalf of Dr Anane on a looming lawsuit against Dr Anane in respect of child support.

The fist tape was recorded in May 28 2003. In that voice recording, Dr Richard Anane start off by telling Alexandra that he had been in Parliament the whole day and that from Parliament he had a marathon meeting with the vice president at the castle/

“First to wish Nikkie a one year anniversary and to communicate to you my respect for you. I love you and I love Nikkie. I will be calling back, but unfortunately, I have been asked to go for the commissioning of a project,” Dr Anane says.

The above salutation was followed by another important hint. “We are still making arrangement s fro the issue, so please, keep your finger crossed. I have been talking to Kofi the whole of today.

There was a small hitch and the director has travelled out to the northern part of the country, as soon as he comes back things will be okay: Thank you very much” Anane says.

The next voice message came. It was Dr Richard Anane again. It was this voice that confirmed the suspicion that Dr Anane may have been sending money to Alexandra through passengers and officials who were travelling to the US.

Hi Alexandra, I am so sorry. It appears you have been calling the whole day, but you have not been able to get me. I have been moving up and down, but there seem to be a hitch.

The gentlemen who was supposed to be coming is rather supposed to be going to London and we though the conversions would reduce everything”, Anane says.

“The gentleman who was supposed to give it did not give it and that is what has kept me moving up and down. Please, be calm. I will try to make sure we sort it out as quickly as possible,” Dr Anane says.

BE AN HONOURABLE MAN

The next message voice recording was a confrontation between Dr Anane and Alexandra in respect of the issue of transfer of money.

“ Well, I said I wanted a clarification and you have clarified that for me” Dr Anane said.

Alexandra replied “ I clarified, Richard that $80,000 is what you sent to me for the past two years. Explain it to him right now on the phone.

You know Richard you are playing the game with the wrong person.

At this point in the confrontation, Dr Anane opted that the matter of his money transfers should not be discussed on the phone, but Alexandra asked him to be a honourable man and tell the truth about the money transfers.

Alexandra pressured him to tell the truth saying, “ I asked you to just go ahead and clarify it to him on the phone and then we can hang up. Just clarify it to him, tell him the truth that $80,000 is what I said you sent in 2 years.

“It alright,” Anane said adding “ I have asked you a question and you have clarified it to me, that's okay”.

“No, No, No, just clarify it to him that you sent $ 80,000: that is what he was saying counts. Be an honourable man, Are you a man of your word? Tell him right now what I just said. Richard be an honourable man and say it in front of me on the phone,” She says.

Dr Anane says” I have said it's alright. It's concluded,” But Alexandra said, “ No, it's not alright, its not concluded. I want you to pass the phone. Richard, tell him the truth.”

Dr Anane interjected again and said “ I cannot continue keeping them here all this long. You can keep me waiting, but you can't keep them waiting: let's leave it for tomorrow.”