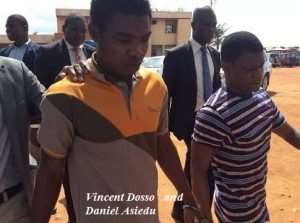 Madam Gloria Akuffo, Attorney General (AG) and Minister for Justice, has explained that the discontinuation of the case against the prime suspects at the centre of the murder of Joseph Boakye Danquah Adu, a former member of Parliament (MP), is strategic to allow for a more comprehensive investigation to be conducted.

The prime suspects, Daniel Asiedu and Vincent Dosoo, were discharged Tuesday morning, and Madam Gloria Akuffo explained further that the couple would be rearrested, after what she described as new developments that had cropped up. She said: “The two are not gone… they are not walking at all.

“We have reviewed the docket, and we have come to the conclusion that there are aspects of the matter that require further investigation. Therefore, entering nolle prosequi does not permanently terminate proceedings against Asiedu and his accomplice.

“It has become necessary to discontinue the action for now, because, having studied the docket, there are certain areas that require further investigations. So, we have not dropped the charges completely as it has been put out.

“We want to go into the matter. We want the police to further investigate some aspects of the matter, so that we can fully examine the totality of the evidence pertaining to that case.”

Madam Gloria Akuffo, nonetheless, failed to disclose the aspects of the case needing further investigation, saying, “Professionally, it would be imprudent. But, definitely, this case will continue.

“If I were not ready, I would not have discontinued the case,” the Justice Minister emphasised.

In view of this, Madam Gloria Akuffo assured the public that the state would arraign the suspects before court again, upon gathering enough evidence.

Daniel Asiedu was discharged by an Accra High Court, presided over by Justice L.L. Mensah, together with Vincent Dosoo, after the Attorney General said it could no longer prosecute the suspects, thereby terminating the case.

A Senior State Attorney, Sefakor Batsa, informed the court on Tuesday that the state could no longer pursue the case, which had been going on for over a year.

Daniel Asiedu was arrested in 2016, after he was alleged to have stabbed the late Joseph Boakye Danquah Adu, aka JB Danquah, Member of Parliament (MP) for Abuakwa North, with a knife, leading to his death at his residence in Accra.

Two days after murdering the MP in cold blood, the then Accra Regional Police Commander, Commissioner of Police (COP), Dr. George A. Dampare, led an operation, which led to the arrest of Daniel Asiedu, who allegedly confessed to committing the crime.

Aside killing the MP, Asiedu bolted away with the deceased's mobile phone and other valuables.

The police, therefore, charged the accused person with three counts of murder, conspiracy to commit robbery and robbery. Vincent Dosoo was standing trial for abetment of robbery.

When the two suspects last appeared at the Criminal Division of the Accra High Court, a fortnight ago, the case was adjourned for the empanelling of a jury for the trial.

A jury was expected to be established a week earlier to commence trial, however, the prosecution pleaded with the court for an adjournment, to enable it to deal with an emerging development, which needed to be dealt with.

Counsel for the two accused persons, Muniru Kassim, did not express any objection to the prosecution's plea at the sitting.

Adding his voice to the new development, the First Deputy Speaker of Parliament and MP for the Bekwai Constituency, Joseph Osei Owusu, told the press yesterday, after Parliament had closed sitting, that the alleged murder of the Abuakwa North MP had not been set free as was being speculated.

He, consequently, advised the public to exercise patience for the AG's office to do the necessary investigations, before it opens the case more properly.

By Inusa Musah and Suad Yakubu