Kashimbila Dam Must Urgently Give Water To Affected Communities 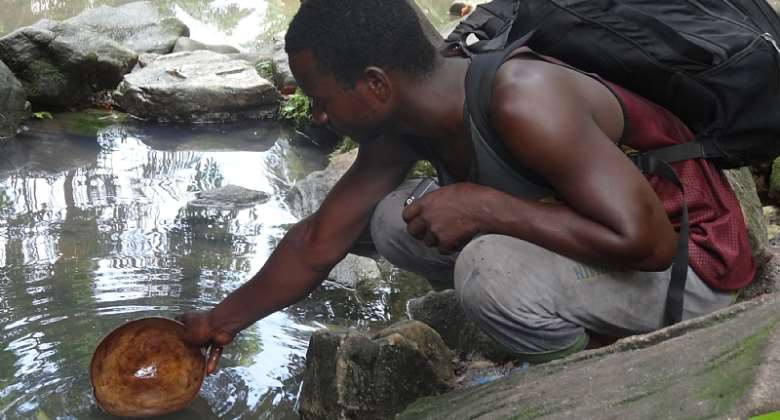 As potable water becomes scarce in Akum-Upack, Bako Gilbert helps himself to a drink from this murky water, which is the only drinking spot in the village of over 5,000. Now the village celebrates the fact that the rain is giving them enough water for drinking and cooking.

To move from one part of the village to the other, the community must cooperate and use the few boats they have been able to build or acquire. Going to the remaining farms far from the village must start with a boat.

Kachimbila Multipurpose Dam signed no agreement with the communities to provide them alternative transport.

Fortunately, only one case of drowning has been reported. Could have been worse if the people did not have incredible survival skills.

Aurecon.com behind the design and feasibility studies of Kachimbila Multipurpose Dam, do not understand that even operating in rogue or failed States, like Nigeria and the Cameroons, they have to be guided by international jurisprudence.

The UN Declaration on the Rights of Indigenous Peoples, while not itself a treaty, in effect summarizes these internationally recognized rights, as they apply to indigenous peoples, setting out minimum standards which States must observe. These include the obligation of States to recognize indigenous (META) peoples’ rights to:

- Self-determination (including self governance and self-identification)

- Freely dispose of their natural wealth and resources

- In no case be deprived of their own means of subsistence

- Own, develop, control and use their communal lands, territories and resources, traditionally owned or otherwise occupied by them

- Give or withhold their free, prior and informed consent prior to activities proposed on their lands

- Represent themselves through their own institutions

- Exercise their customary law
- Restitution of their lands and compensation for losses endured.

It is also important to note that under international law,

violation of a human right gives rise to a right of reparation for the victims... [in order] to afford justice to victims and alleviate their suffering ‘by removing or redressing to the extent possible the consequences of the wrongful acts and by preventing and deterring violations.’ Measures to this end include restitution, compensation, rehabilitation, satisfaction and guarantees of non repetition.

With this clear notion of the legal framework protecting these communities, we hope to have our day against both Cameroon and Nigeria in the competent regional and international jurisdictions.

Hopefully, we may soon be able to get the Federal Government of Nigeria to immediately open the dams and release the water which has become an international bane. Cameroon and Nigeria are not ready for another Bakassi type conflict.