Captain Mahama's Death Must Be Avenged 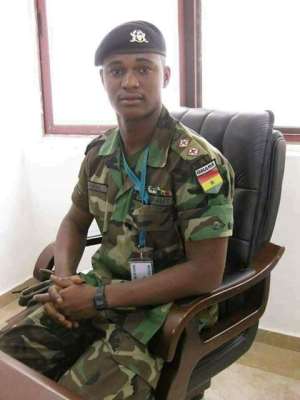 No Sympathy For The Criminals, The Lynching Was Carried Out On Purpose!

I could hardly believe my eyes and ears when I looked at the uncivilized savage treatment meted out to the body of late Captain Mahama.

Nothing but revenge will calm the nerves of the soldiers who were on duty with their Commander, only to be informed about his death. Please avenge for the death in whatever manner.

Is that price to pay for being a security personnel? I'm honestly horrified.

Learnt of the barbaric act as being mistaken identity? It is absolute nonsense which should be rejected with contempt.

My inquiries points to the fact that Captain Mahama was very much known in the community, so the argument of mistaken identity have nothing to do with it. It was plot that has taken a twist.

The woman who is reported to have made the distress call, for me must be the subject matter and the action of the 'Assemblyman' for organizing lynch group deserve death penalty.

I'm very, very worried and bitter about the future of the country's security. These people kill innocent people under false pretenses and pretend to claim ignorance. No, not now!

The fact that they have deserted or ran into the forest is an ample evidence that they acted capriciously and must dealt with in the same vein.

No amount of talks aimed at ending now be tolerated, I entreat! The area of the incident I'm informed is very notorious for such barbaric acts. There must be a clampdown starting from the Chief of the village to last person.

The incident bring to mind a similar situation when the indigenes of Ho Dome vandalized the Commanding Officer's vehicle during a 'yam festival' occasion. We spared no one - then a young soldier we instilled the fear of God in their silly mindsets.

I say again, the military must not accept any pleading for now. Anyone thought to be part of the criminals should be made to go through "the talk true mill", whether a man or woman.

Many a time, civilians tend to ruffle the the military and it is now or never to take a look at the occurrence and prescribed the right antidote to avert further and future incidents.

I have had cause to complain about harsh treatment my former colleagues at times mete out to people but in this instance, I'm embolden and encourage them to pursue the culprits and deal robustly with anyone.

Beat the hell out of them! They are evil people deserving no sympathy. I will hate to hear human rights groups says the soldiers should not take action. As it would not be taken lightly.