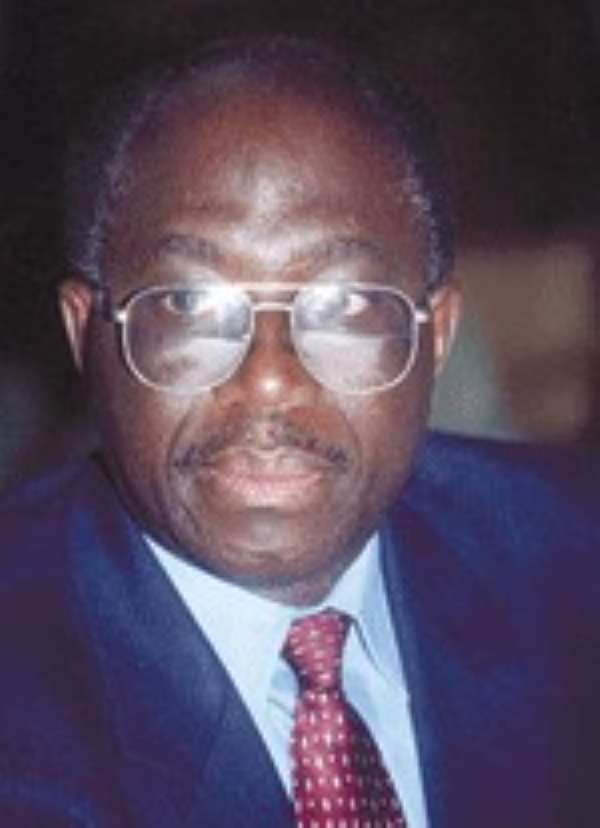 Saga of bogus allegations over GIA deal Bury him with facts, not fiction – Aide The bald head Minister of Road Transport, Dr Richard Anane, may be having the last laugh over last week's campaign to oust him from his ministerial post, following emerging facts that seem to clear him of a number of specific allegations by critics.
Among the claims that fell foul of strict evidential proof this week was the allegation that Anane had halted ongoing co-operation talks between Ghana Airways and Ethiopian Airlines, and given Ghana International Airlines (GIA) the green-light to resuscitate that move to bail itself after it was given the national carrier.
By press time yesterday, GYE NYAME CONCORD had gathered documents and facts suggesting that Ghana Airways' negotiation with Ethiopian Airlines was largely truncated following the ban on Ghana Airways from flying to the US.
The US market, this paper gathered, was the key target for the Ethiopians at the time of discussion on code sharing the routes.
Again, the much-heralded due diligence assessment by Pricewaterhouse Coopers, which was used to suggest that the Fidelity Group/Kenya Airways/KLM consortium should have won the bid, has been shot down, following the hitherto unknown disclaimer on it by its authors.
“We wish to note that we have not conducted an audit or a due-diligence review and we do not vouch for the accuracy, completeness and reliability of the information furnished in any of the proposal that we evaluated”, Pricewaterhouse Coopers noted in the very first pages of its report signed by Director, Felix Addo.
It is now also known that the Fidelity Group/Kenya Airways/KLM consortium, which some critics say should have won the bid for the national carrier, clearly stated that they were not interested in taking up a stake in Ghana Airways, leaving that option open to GIA and Ghana Air Partners.
Ghana Air Partners, it has also been established, submitted an incomplete bid that they themselves tagged “a preliminary draft proposal.” That proposal was incomplete, did not state the level of stake they wanted to take and fell short of the requirement, according to an assessment by Pricewaterhouse Coopers available to this paper.
Worst of all, the proposal did not contain details of their management team. Instead they pledged to update government on the CVs of its team during what its saw as “serious negotiations with the Government of Ghana.”
Again, contrary to allegations that GIA never envisaged a partnership with Ethiopian Airlines and that Anane seized a Ghana Airways idea for GIA, page six of the proposal by GIA actually spelt out its intent to establish a “strategic East and South regional partnership as soon as possible with the Ghanaian national airport as a gateway to Africa.
It then hinted of its continuation of that engagement with Ethiopian Airlines and other subsequent interested groups.
Even, the much-vaunted media report on calls by the Young Executive Forum of the ruling New Patriotic Party (NPP) on Anane to resign fell flat on its face last Friday, April 29, 2005, when the group issued a disclaimer in which they alleged that “at no time in any of our meetings had we discussed the issue or statements attributed to us…”
Riding high on the various vindications of his boss, Mr Ken Anku, Public Relations Officer of the Ministry of Road Transport, yesterday admitted that as human as his boss was, he has his failings.
But if you want to bury him, bury him with facts, not fiction, he suggested on various radio stations across the national capital.
In his view, the complaints by Ghana Airways staff that Anane had caused the non-payment of their salary since the beginning of this year was itself also misplaced. The schedule for supervision of the aviation industry was no more with the Ministry, he said, pointing out that that schedule is now part of the responsibility of the Presidency/Chief of Staff.
Meantime, a letter dated July 21, 2004 from Ghana Airways Board Chairman, Dr E. R. K. Dwemoh (see copy on front page) to Anane noted that the co-operation deal between Ghana Airways and Ethiopian Airlines, which the Minister was alleged to have truncated, was meant to be a temporal measure aimed at averting the collapse of Ghana Airways while Government shopped for a strategic partner.
“GH is pursuing avenues that will enhance operations and forestall the collapse of the airline while we await the Strategic Partner,” the letter noted in its very first paragraph.
The letter also noted that the negotiation with Ethiopian Airlines was “to enhance code-share arrangements on the regional and North American routes.”
Subsequent details of the arrangement between Ethiopian Airlines and Ghana Airways reached on 15th – 17th July 2004 in Addis Ababa, the Ethiopian capital spelt out the areas of cooperation.
Among the key issues thrashed out was the provision of one B737-200 wet aircraft on a wet lease basis to Ghana Airways by August 9, 2004 for the winter season. Another aircraft was expected to be provided to Ghana Airways till October 2004, as part of that code-share agreement.
“…In order to alleviate GH's problem in the short term, ET agreed to provide GH with one B737-200 (AJB) on wet lease basis by August 9, 2004 for its regional routes until such time ET restructures its routes and is able to take out new B737-700 for use by GH in the coming 2004/2005-winter season. Moreover, ET agreed to assist GH in leasing one B767-200 and one B737-300 for interim use on wet lease basis from the market until October 2004 (until GH acquires aircraft on long term). ET has also agreed to train cabin crew for GH at mutually agreeable rates.”
The so-called agreement for Ethiopian Airlines to bail out Ghana Airways was expected to last for a year, this paper learnt.
But before the agreement could take off, Ghana Airways management expedited action on the grounding of the airline and flew their aircraft to the US against advice and caution by the US Federal Aviation Authority, leading to a pull-out by Ethiopian Airlines.