Ghost Names On Payroll:  Time For Heads To Roll 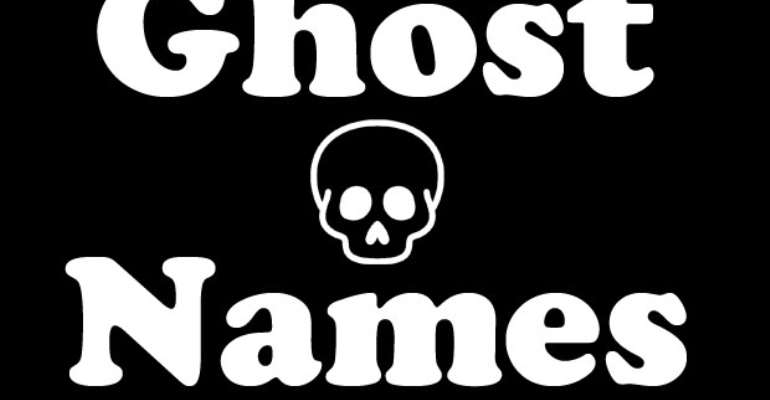 In folklore, a ghost, which is sometimes referred to as apparition, phantom or poltergeist is the soul of a dead person that can appear before the living. The issue of ghost names on the payrolls of government workers has been with us for a long time and the time has come for us to either seek the services of an exorcist to help us exorcise the ghosts from the payrolls or tackle the issue like the way we are about to tackle the 'galamsey' menace.

If this government will succeed, something which is not negotiable or open to debate, then the Akufo Addo-led administration should dare the devil and take issues like ghost names on payrolls ruthlessly. Heads must roll because we cannot sit down for a few greedy criminals to do whatever they could do to get rich quick. Those of us in the inky fraternity can do our part to expose evil in the society but the buck stops at the doorsteps of President Akufo Addo. Thankfully, since the repeal of the Criminal Libel Law, the media landscape of Ghana has taken a new dimension. The media is vibrant because there is freedom of speech which is inseparable from freedom of individuals. It is an undeniable fact that without freedom of expression, there can be no social change and development is unthinkable.

Having gotten this freedom since the Criminal Libel Law was repealed, the media should reciprocate by helping the government fight social cankers like ghost names on government payrolls. Ironically, when Nana Akufo Addo became the Attorney General and Minister of justice and worked so tirelessly to repeal the law, little did it occur to him that he will become the president of Ghana one day. If the media has any thanks to give Nana Akufo Addo, they should do so by exposing criminals who milk our collective wealth. No wonder in other jurisdictions, the media is referred to as Watchdogs. It is the duty of those of us in the media to take on men and women who organize and supervise this shameful game, this insidious farce called ghost names

From the revolutionary days to this 4th Republic, all governments that have come and gone had cause to speak about the evil but sadly no single ghost has been arrested. Perhaps we are so scared about what is happening at the spiritual realm that all what we can do is to complain and allow the ghosts siphon our collective assets. Other than that why should we sit down all this long for a few criminals to take us for granted? When the president, Nana Akufo Addo told Ghanaians that the Minister of Finance has been able to identify 26,589 ghost names from the national payrolls, I nearly hit my head against the wall. And come to think of this: a whopping GH¢433 million ( 4,330,000,000,000.00 old Cedis) would have gone into the pockets of nation wreckers while this amount could be used to construct more than one hundred small factories across the length and breadth of the country for the youth to get work to do.

Even though previous governments did complain of ghost names on payrolls, this is the time for us to trigger a national conversation on the issue and find the solution once and for all. In this country, anytime you try to point out issues like corruption and other social menaces, people say you are doing witch-hunting, particularly when the issue concerns a politician. So if there are witches in the system, should we not hunt them down? Similarly if there are ghosts who receive salaries in government departments, there is the need for us to exorcise the ghosts to save the national coffers. If we fail to do this it will look like going for water and pouring it into a leaking barrel. Salaries of government workers are paid from the Consolidated Fund and the tax I pay goes into that fund so I have the right to complain.

I challenge the Minister of Finance to come out openly to tell Ghanaians where the ghost names were found on the payroll. He should also tell us measures that have been put in place to kill the menace once and for all. The time has come for us to name, shame, and prosecute people whose main aim is to dupe this nation. If for example ghost names were found on the payroll of the Ministry of Food and Agriculture, we need to know who was in charge and why such a person gave room for ghosts to siphon our collective wealth. Accountants who might collude with these ghosts should be exposed and punished severely to serve as deterrent to others who may contemplate committing similar offences.

And my cherish reader, permit me to serve notice that if the BNI, CID and the Financial Intelligence Unit fail to unearth this perennial presence of ghost names on our payrolls, yours sincerely will continue to breathe on their necks until they all resign for more competent persons to be appointed to deal with the matter. In other jurisdictions, Financial Intelligence Units are supposed to serve as a national center for the receipt and analysis of suspicious transaction reports or other information relevant to money laundering or financial terrorism. If the Minister of Finance has done such a wonderful job to save what would have gone into private pockets, what keeps the CID, BNI and FIU from following suit to unearth the mystery? Or like the way the Yankees were brought to Ghana to investigate fire outbreaks in our markets, we should also go for some Israelis to help us catch ghosts in Ghana?

Anytime we mention corruption in this country we are quick to point accusing figures at politicians, forgetting that the more corrupt officials are the Civil Servants. Few politicians owe plush mansions in places like East, West Legon or Adjirigano. Most of the mansions are owned by these Civil Servants. Their take home pay has nothing good to write home about but they owe properties across the country and some of them have very fat foreign bank accounts. If an accountant in one ministry can insert one thousand ghost names on the payroll of that ministry, you can imagine how much he will take home at the end of every month. We live in a country where people honour rich persons, no matter how the person acquired his wealth. Professors are walking on our campuses with worn out shoes but criminals are riding luxurious cars and living like kings. They are the persons who occupy the front pews of money-making churches and worshiped and revered more than they do to Jesus Christ.

In other countries if such things do happen frequently, the government will commission an investigative journalist like Anas Aremeyaw to go underground to unearth the truth. Money that would be used to contract such an investigative journalist is negligible as compared to what the nation will lose if the canker is allowed to fester. The Minister of Finance should liaise with investigative journalists and other security agencies to bring this nonsense to an end. I did not vote for the Nana Akufo Addo-led government to live under the status quo. Things must change. That is why we voted for change. Yes, I do agree in the course of bringing change, peoples' toes will be trampled upon but if the positive change that we are all looking forward to will come after peoples' toes are trampled upon, so be it.

The issue of fighting ghost names on our payrolls is similar to that of the 'galamsey' fight. Even before the Minister of Lands and Forestry could step on the accelerator in his attempt to eradicate 'galamsey,' I heard some irresponsible Ghanaians saying if the President fails to stop the minister, the party will lose the 2020 general election. What these people fail to understand is that history is made from such bold actions. If the NPP should lose the next elections and the environment and our river bodies are saved, generation yet unborn will write the name of Nana Akufo Addo in gold. And what they also fail to understand is that greater number of the populace support the fight against galamsey and ghost names. So where lies the threat? To me the threat of not voting for the NPP if the ministers did not stop the fight against “galamsey” is an empty one.

The fight against ghost names on government payrolls can be won if genuine workers are prepared to expose such ghosts. Government works are paid through the banks and as such workers could identify people who do not work at their places but join the queue with them to collect their salaries. If such persons are reported to the BNI, the BNI could monitor their movement and track them down at the appropriate time. I know a guy who lives near my house who is always seen at home but at the end of the month when workers are going to the banks to collect their salaries, he also goes to a particular bank to collect his salary. If he owes someone and the person demands for the payment of the debt he will tell the creditor that he has not been paid that particular month's salary. Meanwhile he is always seen playing draft during working hours. In my own small way, I have focused my searchlight on him.

It has been nearly two years since I stopped puffing cigar but today because of the anger in me following the discovery of so many ghost names in government payrolls, excuse me while I puff a stick of Cohiba cigar, the late Fidel Castro's favorite cigar.

The author has 97 publications published on Modern Ghana.