Blitzing The Ramified Armed Robbery Must Be The Government’s Priority 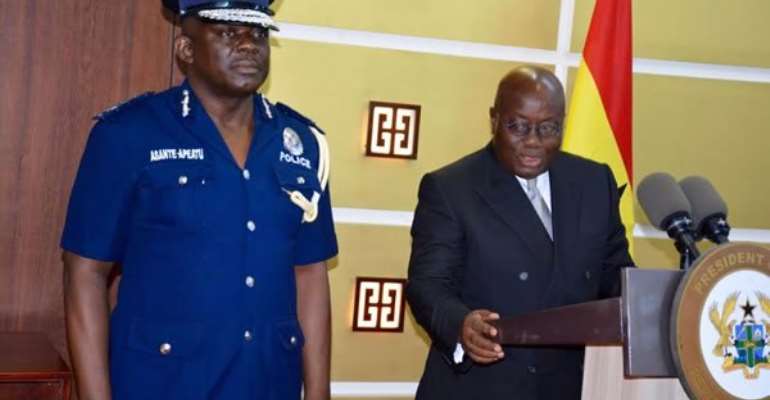 Unfortunately, the government of His Excellency President Nana Addo Dankwa Akufo-Addo has been handed a country that institutional corruption, armed robbery, insecurity, lawlessness, practice of selective justice, judicial corruption and all sorts of socio-economic ills are conspicuously intrinsically established. These very social, economic and institutional malpractices were either spearheaded and orchestrated, or masterminded, by the immediate past President and his NDC government.

However, it will be ignominious for President Nana Akufo-Addo to attempt to play the NDC’s infatuated, but despicable blame-game of equalization. He won’t play any blame-game, the trait of the NDC, but will rather honestly through dedication, solve the problems. Knowing he has been appointed by God through the exercise of the Ghanaian electorates’ franchise to come to redeem Ghanaians from the rogue administration by former President John Dramani Mahama and his cabal of the Ghanaian version of the Arabian Ali Baba and his forty thieves, all discerning Ghanaians must have their hands on deck to deal with the menaces without waiting for any formal invitation by whomever.

Subsequently, I shall convey to the attention of the President a strategic suggestion/advice I wrote to former President Kufuor and whether or not he received the letter or did implement the suggested policy is not of much relevance to me today. I am going to suggest same to His Excellency President Nana Akufo-Addo and whether he will adhere to it is a matter for him to decide. I am only playing my part as an active citizen of Ghana who loves his country and is naturally endowed with wisdom, has compassion for people and is at the service of his people and nation.

With the advent of NPP to power following their massive win of Election 2016 on Wednesday, 7 December 2016, there has been a concomitant increase in emboldened armed robberies and all other forms of robberies in Ghana. These robbers of all sorts and shapes are causing fear and panic among the public, thus, innocent and law-abiding Ghanaians.

It is barely about six weeks ago, when in my own backyard (Juaben in the Ashanti region), some robbers raided two homes in the night while the occupants were deeply asleep snoring. How did they enter these houses unnoticed although the occupants of the rooms entered into were present and asleep? They removed the protective window iron bars, cut off the mosquito nettings and removed the window panes. They did all these without any of the occupants in the rooms waking up but still soundly fallen asleep.

They ransacked the rooms; retrieved valuables like internet tablets, smart phones, watches, money etc. In the second house which belongs to a Ghanaian resident abroad (burger) that had shipped a lot of personal effects and other valuable items home, they stole a lot of things. The occupants were only to wake up in the morning to see how their houses and rooms have been raided.

How could they enter these houses with people asleep in their rooms but could not get a wind of their presence? This is how sophisticated the robbers in Ghana have become under the NPP administration. This is an ongoing menace at the moment.

Additionally, there have been reports of armed robbers attacking traders going to Yendi and Yeji from Kumasi and/or Tamale. These robbers take away all their money at gunpoint. I heard this live reportage on radio when some people in Yeji were being interviewed on air by a radio station’s programme presenter. The interviewees said the government should come to their aid to prevent these robbers because they found it hard doing business. This is because those robbed could not purchase anything from them when they reached Yeji because they would have no money to buy anything.

They pleaded for government to put soldiers on the roads as they have less confidence in the police who are tainted with corruption and have witnessed instances where police personnel have been arrested for involving themselves in armed robberies or thefts of all sorts.

The safety and protection of the citizenry and their properties as well as the prevention of crime are always pivotal in any good governance and since I have been, and continue to be, supportive, of President Nana Addo Dankwa Akufo-Addo, I shall suggest to him what I suggested to former President Kufuor and what was probably seen to have been implemented by former President Mahama but on a smaller scale.

What pride have you as a Ghanaian if you fail to convey the good things you learn abroad to your country to benefit the people? One does not necessarily have to be in a position of responsibility, power or in government to be able to serve their nation and people to the best of their ability. All it takes is to pass on useful information to those in power to implement them. However, in Ghana, most of the people in government or positions of responsibility with their typical Ghanaian evil-mindedness of “he is coming to take the limelight out of me”, thus, taking the credit for what should have come to me if such good suggestion had come from me hence refusing the advice or suggestion outright, will they listen to such useful suggestions?

Anyway, my advice is based on the experience I acquired whilst living in Paris (France) in the 1980s and 90s. Whenever acts of terrorism by the FIS (Front Islamique du Salut), an Algerian opposition political party that was on course to win the second round of their national election against the ruling FLN (National Liberation Front), were rife on the French soil, the following happened. The French government would order the soldiers out of their barracks to assist the police maintain high security and protection of the citizens.

The public bins in train and bus stations as well as those in various vantage points throughout the cities and towns would have their lids welded on to them with the openings sealed off. This would prevent the terrorists from secretly placing any bombs, or improvised incendiary devices or explosives in them with intent to killing many innocent citizens.

The heavily-armed soldiers would be patrolling train stations, bus stations/stops, major public places, shopping malls and the streets in groups under the commander of police personnel. There might be say six armed military with one or two armed policemen or women. They would randomly pull out people (suspects) from the crowd and search them. Their mere overwhelming presence was more than enough to scare people let alone, their propensity for pulling out people and searching them.

When they came out to conduct this activity for say three months, all acts of terrorism would subside or completely disappear for life to revert to normal. It was this experience that I passed on as said.

I am again passing on same information to His Excellency President Nana Addo Dankwa Akufo-Addo, the Joseph, Moses or David of our time. He should please use his Executive powers to get the military out of their barracks to assist the police to stop the armed robbery menace on our roads and in our cities and towns. The President is to go the French way to blitz the armed robberies and all the other sophisticated forms of robbery as happened in Juaben.

Many a Ghanaian is complaining that the robberies are currently in ascendancy and ramifying. The robbers often take advantage of civilian governments, seeing them as too soft to inflict decisive blow to their criminal enterprise and to their person hence come out brazenly to do their nefarious trade but it shouldn’t be under the watch of “Akyem kwaa” His Excellency President Nana Addo Dankwa Akufo-Addo.

I am among those who suffered and went every length to see Nana Akufo Addo successfully wrestle power from former President Mahama, the most corrupt President in the annals of Ghana politics. Therefore, I should be among those to help President Nana Akufo-Addo successfully deliver on his numerous manifestos or campaign promises to Ghanaians hence this advice and suggestion to him.

Whoever reads it must bring it to his attention or to the attention of his wife or children to enable them pass it on to him.