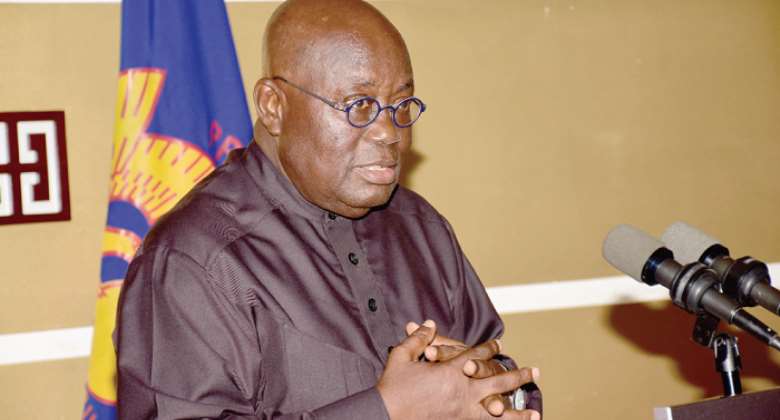 The first 100 days of the Akuffo Addo Presidency has been characterised by very interesting developments which have given Ghanaians an insight into the type of governance that they must expect over the next four years.

Starting with the composition of members of the government the Akuffo Addo Presidency has been characterized by nepotism at an unprecedented level in Ghana with the appointment of relatives to key government ministries such as, Mr Ken Ofori Atta, Minister of Finance, Mr Atta Akyea Minister of Works and Housing, Mr Amoako Atta Minister of Roads and Highways, Mr Asante Bediatuo Executive Secretary of the President and Ms Gloria Akuffo Attorney General. There is also the appointment of the President’s daughter unto the Creative Arts Council among other high profile members of his family who wield major political influence in advisory roles in this government. These relatives may be qualified and competent, however prudent policy and governance best practice worldwide frown on such appointments for obvious reasons. There are obviously other qualified and competent Ghanaians who can perform these roles without the negative controversies that accompany such wide spread nepotism.

Another distinct feature of the Akuffo Addo Presidency in its first 100 days has been the unusual large number of ministers that he has appointed to serve in his government. With 110 ministers to date, President Akuffo Addo’s government would go down in history as being the largest government ever constituted in Ghana and perhaps worldwide. The defence for such a huge ministerial machinery has been that the numbers are not significant but that what counts is the output. However, again best practice in governance worldwide has been to deliver optimum output in performance with smaller number of ministers and not vice versa. It is obvious that the main reason for such large number of minsters is to find jobs for the boys and girls, in order to satisfy the many groups of people that the President promised the spoils of war on his way to the elections battlefield. The negative impact on the public purse of such a large government, and the challenge of managing such a huge political bureaucracy - not forgetting the obvious territorial battles that are bound to arise from such large number of ministers - would only operate to the detriment of the country. Obviously, if flag bearer Akuffo Addo had promised Ghanaians that he would form a government of 110 ministers, the outcome of the December 7 elections would most likely have been different.

That the first 100 days of the Akuffo Addo Presidency has been characterised by numerous instances of abuse of political power is an understatement. Instances of such abuse of political power includes rampant arbitrary dismissal of public sector workers on flimsy and politically motivated grounds. Dismissal of government appointees of District and Municipal Assemblies, Police Officers, District Directors of National Service Secretariat, Governor of Bank of Ghana, CocoBoard Directors among many others are relevant examples.

Other instances of abuse of political power have been witnessed in Government’s decision to weaken the local governance system through arbitrary reduction of District Assembly Common Fund allocation from 7.5% to 5% in violation of established constitutional provisions for allocation of Government revenue to district, municipal and metropolitan assemblies - an obvious attack on Ghana’s decentralisation policy. Allocations to statutory funds such as GETFUND AND NHIS have also been tampered within similar arbitrary exercise of power designed to move funds to politically motivated programmes that are being rolled out with very little supporting feasibility studies or business plans confirming their viability. These programmes such as the $1million per constituency, 1 district 1 dam, 1district 1 factory programmes have all been targeted for funding with these diverted funds at a huge risk and cost to the state. It is obvious again that had the NPP been sincere with Ghanaians, and disclosed to Ghanaians that their political programmes were going to be funded at the expense of statutory allocations of state institutions such as the district assemblies, the outcome of the 2016 elections would have been different.

The first 100 days of the Akuffo Addo’s Presidency has also been characterised by rampant instances of broken promises. In this regard big promises to reduce electricity tariffs and fuel prices have been deliberately ignored and have turned out to be nothing but political baits crafted to secure votes for political power. This coupled with rampant nepotism and tribalism has resulted in a significant reduction in the goodwill and euphoria that greeted the Akufo Addo’s Presidency. The reality that is setting in is that all that has occurred has been nothing more than a successful implementation of a political master plan to hoodwink the people of Ghana into voting for Akuffo Addo in exchange for much more economic hardships and unprecedented abuse of political power ever witnessed in the 4th Republic

Yet another significant feature of Akuffo Addo Presidency’s first 100 days has been the upsurge of politically supported vigilantism and lawlessness spearheaded by NPP groups such as the so called Invisible Forces and Delta Forces. Apparently these groups have been deliberately introduced into Ghana’s political environment by the NPP with tacit or implied endorsement from President Akuffo Addo, and with the primary goal to intimidate political opposition and the general public. These vigilante groups have been nurtured by the President and his allies in the NPP and were utilised successfully to silence dissidents within the NPP. They have similarly been unleashed on Ghanaians to intimidate Ghanaians and to stifle any significant opposition to the Akuffo Addo Presidency. Indeed the recent attack on a Kumasi Court by elements within the Delta Force in a bid to free their colleagues who were undergoing trial for brutally assaulting an appointee of the President clearly demonstrates the hopeless state of lawlessness that Ghana has been plunged into since the advent of the Akuffo Addo Presidency.

The legitimate and related question to ask is what law permits vigilante groups such as the Invisible Forces and Delta Forces to operate in Ghana? Are they permitted to carry weapons by law? Are they under police supervision of any sort? If not then legal action should be initiated against them challenging their authority to operate and to seek their dissolution for operating contrary to the laws of Ghana.

Generally, the first 100 days of Akuffo Addo’s Presidency has been characterised by wanton lawlessness and abuse of political power that has dented Ghana’s enviable democratic credentials. Within the period, Ghanaians have witnessed alarming instances of nepotism and tribalism in political appointments, coupled with a bloated political beaurucracy that has made Ghana a laughing stock in the world.

The first 100 days of Akuffo Addo’s Presidency has also largely been characterised by creeping dictatorship that the government seeks to perpetuate through intimidation and suppression of dissent by the use of vigilante groups such as the Invincible and Delta Forces .The way forward is for Ghanaians to rise up to protect their democracy, and send strong signals to the government that they would hold them accountable and probe into their actions to ensure compliance with good governance.

In general the negatives of the Akuffo Addo Presidency in its first 100 days far outweigh its positives. Sadly, in the mist of these developments that have cast a negative shadow on the democratic credentials of Ghana, we have witnessed the huge silence of the hypocritical civil society and so called opinion leaders who had in the not too distant past pontificated loudly on rooftops about winner takes all only because the NDC was in power. A hypocritical Civil Society and “opinion leaders “who have suddenly became sycophants and praise singers of a President and Government whose actions are dragging Ghana’s good name in the mud in just 100 days in power.

Akuffo-Addo's reaction to calls for a reshuffle is disappoin...
52 minutes ago