Ghanaians Need To Be Patient 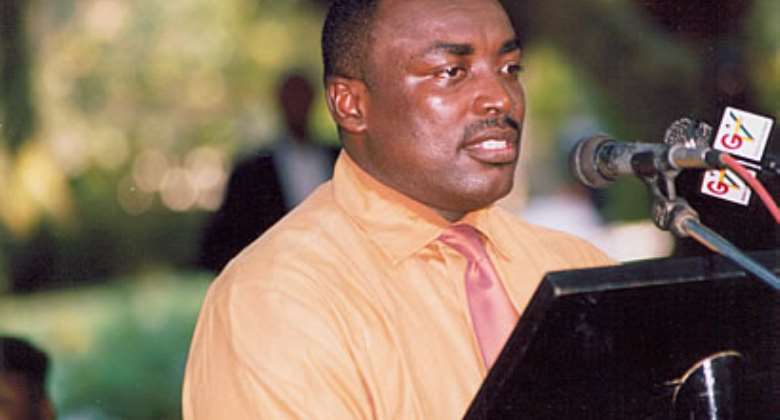 ...media accused of creating "crisis of confidence" ... Govt Uncomfortable with "Darling Boy" Anane Accra, May 6 (Joy Online) -- Presidential spokesperson, Kwabena Agyapong admits that government is smarting under public criticisms over policy decisions taken at the start of president Kufuor's second term in office. Speaking on JOY FM's Super Morning show Mr. Agyapong acknowledged that the recent fuel prices increases, the reduction of import tariffs on rice and poultry products and the decongestion exercises in Accra, Tema and Kumasi has affected the government's ratings. Mr. Agyapong concedes that the unresolved status of Ghana Airways remains a major blot on the NPP administration's record but he told Komla Dumour there are many achievements chalked by this government, which also deserve commendation. He also accused the media of creating what he calls crisis of confidence. When asked whether the crises of confidence is not being created because of government's decisive actions, where industries are collapsing and the cost of living rising, he says the media is responsible for the crises. “The media all over the world loves conflicts and even strong economies like America is suffering from cheap imports from China,” he says. He says industry players will serve the country's interest better if they dialogue with government who can fashion out practicable ways of improving their lot through the private sector ministry. Asked of what government has done for the textile industry for the past two years, Mr. Agyapong replied: “ We have to look at our capacity, and governance is a balancing act of all the interest of society. For instance we have to look at our capacity to produce textiles and whether we will be able to satisfy the demand. We also have to find out why our cost of production is higher than that of our neighbouring countries.” He says government is there to provide support and therefore it does not serve the interest of leaders of poultry farmers to sit on radio and bash government. “ We have to lift the discussion to a higher level and there is no need for a blame game, I am not blaming the media, I'm saying there is a preponderance of negative reportage,” he says Mr. Agyapong says decisions made by the President are well thought of and researched. He therefore appealed to Ghanaians to be patient.