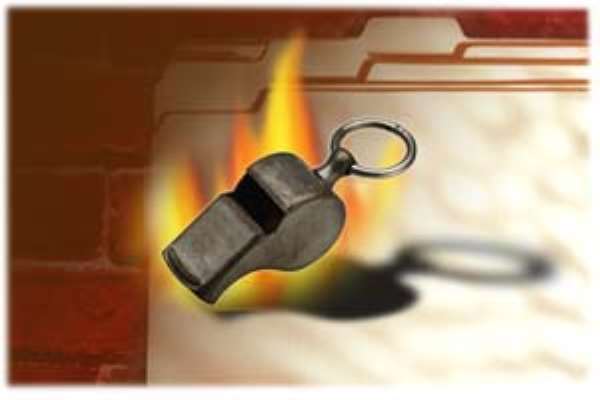 Accra, May 3, GNA - Government has given approval for the "Whistle Blowers" Bill to be laid in Parliament when it resumed for the next sitting.

Mr Dan Botwe, Minister of Information, who announced this on Tuesday, said the Government was also giving priority to the passage of the "Right to Information" Bill into law in furtherance to principles of democracy, freedom of the press and the freedom of information.

Mr Botwe, who was speaking at this year's World Press Freedom Day, marked with a forum and a flag-raising ceremony in Accra, underscored the role of press freedom and the right to information to the prevention of the human rights abuse and good democratic governance.

He said Government would not waver in respecting the constitutional requirement of the independence of the media, but pointed out that the fundamental role of protecting constitutionally guaranteed human rights and freedom of individuals would only be achieved if journalists maintained the highest professional standards.

"Press freedom would be meaningless if that freedom displays mediocrity", Mr Botwe said at the celebration, which was under the global theme: "Media and Good Governance," and the local, "Challenges of the Post Criminal Libel Law Regime".

Established in 1993 by the United Nations Educational, Scientific, and Cultural Organisation, the World Press Freedom Day, being observed in Dakar, Senegal, this year, presents an opportunity to focus on the importance of protecting the fundamental rights of freedom of expression and freedom of the press.

Journalists in Ghana on this day examine the level of press freedom in the country and reflect on the practice of their profession and the role the media are playing in the development of the society.

Mr Botwe noted that with the repeal of the Criminal Libel Law, some media practitioners had been unfortunately exercising their freedom in a manner as if they had the license to throw journalistic principles away. This is seen in the phenomenon where aggrieved citizens had brought civil libel suits against journalists and media houses for what they saw as reckless violation of their individual rights and damage to their reputation.

"In my opinion the lively debate taking place today about press freedom and others that will follow in the future should help put the challenges of the post Criminal Libel law regime into perspective,' Mr Botwe said.

He urged journalists to come on board very positively on the national development agenda, observing that the use of information as a tool for empowerment would be diminished by media practitioners if they did not use it positively to achieve national aspirations. Mr. Botwe added that a free press must recognise the power it wields and raise the level of responsibility, which a free society deserves.

He urged the Ghana Journalists Association (GJA) to redouble its efforts in creating sustained sensitisation programmes for its members so that they would abide by the ethics of the profession and strive at all times for balanced reporting.

Ms Ajoa Yeboah-Afari, President of GJA reminded Journalists that the trampling on the rights of other citizens in the name of press freedom was a disturbing factor, and that the repeal of the Criminal Libel Law did not mean victims of press abuse would not fight back. "They will, and some are fighting back as the court cases attest," Ms Yeboah- Afari said, and asked, " how do we, as practicing journalists having to walk through the mine field everyday; navigate and reach our destination safely?"

"In as much as we claim the right to practice our profession, people have a right to demand fairness from us because they have the right to protect their reputation.... We should not need legal penalties to obey our own professional code," the GJA President said. She happily noted the absence of Ghana on the lists of a worldwide survey by the Committee to Protect Journalists contained in a report dubbed: " Attack on Journalists in 2004", and said: "never again should Ghana have to be cited for attacks on the press by any form of repression."

Ms Yeboah-Afari called on Journalists to show respect for supporting institutions like the National Media Commission and the GJA as mediators when journalists went wrong, so that aggrieved members of the public would use them as avenues of redress rather than the courts. Professor Kwesi Ansu-Kyeremeh, Director of the School of Communication Studies, Legon, who chaired the forum underscored the role of information in national development, noting that leaders worldwide had the habit of holding onto information to the disadvantage of the masses.

He said journalists had a role in trying to achieve and maintain freedom of expression, and encourage others to help in expanding the freedom.

Prof Ansu-Kyeremeh called on journalists to solidify their position as the fourth estate in the realm of national governance, after the Executive, the Legislature, and the Judiciary. He said much as the Media had a role to expose wrongdoing, people must also see that they exercised their profession with the greatest level of diligence.

How long can you thrive on tribal politics? — IB asks Mahama
31 minutes ago