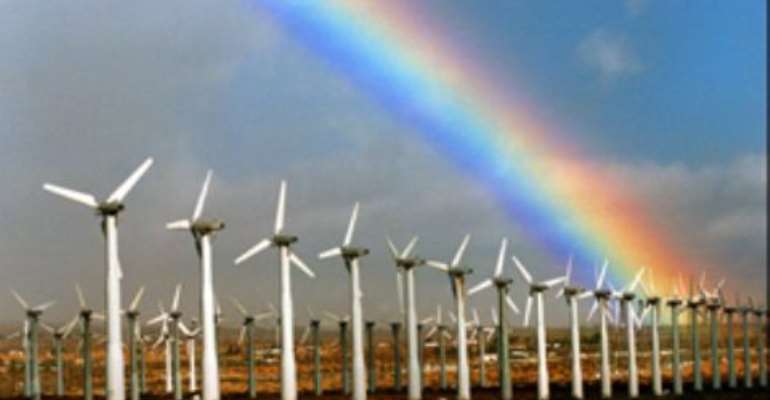 Accra, April 28, GNA - The Energy Commission (EC) of Ghana said the country has a total wind power potential of 2,000 megawatt of power that could be tapped into the national grid for use in the rural areas. Mr Kwabena Otu-Danquah of the Energy Commission was however, quick to add that Ghana lacked the right legal regime and policy direction to facilitate a comprehensive mix of wind and solar energy use.

He said, according to the US-based National Renewable Energy Laboratory (NREL) and the EC satellite data on Ghana, there was immense potential at Nkwanta near the Ghana-Togo border, the Coastal area in the Accra Plains, especially east of the Meridian, the Kwahu and Gambaga mountains.

The SWERA Project is a United Nation's Environment Project Global Environmnenr Facility aimed at promoting the utilization of renewable forms of solar and wind energy.

It is to remove barriers created by the lack of information and supporting more informed decision-making, science and technology based policy that would ultimately increase investors' interest in renewable energy.

Mr Otu-Daquah told the Ghana News Agency that SWERA under the project is helping to assess the overall potential for renewable energy and creating reliable information, and developing information tools for energy planners and project developers, including regional and national maps of solar and wind energy resources. It is also developing a geographical information system interface.

The Project, which started in September 2002 is being funded by an 80,000-dollar grant from the UNEP would end next year.

Under the project, comprehensive data on solar and wind resources have been compiled including direct, diffuse, global and latitude tilt solar data from satellite data at 10-kilometre resolution. Mr Otu-Danquah said global solar resource irradiation was high throughout the country ranging from 4.5 to 6.5 kilowatt per meter per day with a general latitude tilt irradiation equal to global irradiation.

He said direct irradiation is however, low throughout the country but relatively high in the Northern Region with diffuse irradiation high over the entire country.

"Such technologies are solar thermal systems like concentrators for electricity production, adding that in the North Western corner of the country where direct radiation is the highest, solar concentrators will operate for a maximum period of four months a year.

"All solar energy technologies that use global radiation to produce energy such as PVC's and water heaters would operate efficiently throughout the year in any part of the country."

Mr Tom Hamlin of the Global Environment Facility and SWERA Project Manager said Ghana was far from reality on the use of wind and solar energy mix, "as a lot more work remains to be done before we can touch implementation stage."

He said the wind systems findings are interesting and must be followed earnestly.

Full report: Investigation of killings, shootings in Ejura
13 minutes ago

Security personnel must wear bodycams during crowd control —...
29 minutes ago