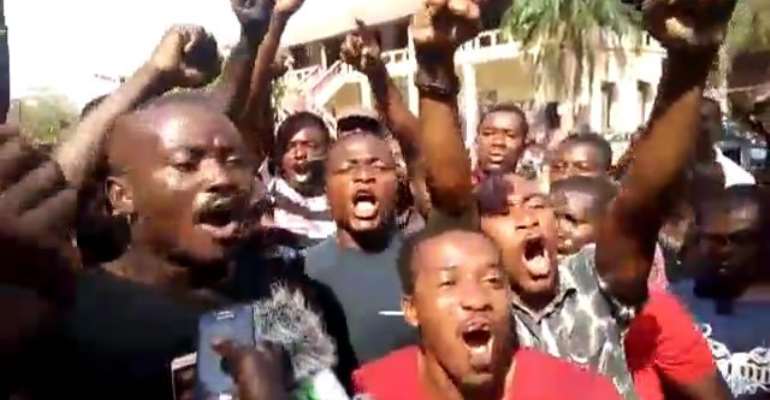 The sound Woof whoof, reminds me of this song titled: “Who Let the Dogs Out”? And I guess many of you are much familiar with the song when it hit the airwaves in the Y2K’s. Back then I didn’t fancy it. But I think it probably caught my attention because of its repetitive dog barks—whoof, whoof, whoof, whoof, whoof.

Today, the song’s beguiling title has put ketchup on my French fries. In other words the title is right for this write-up.

Before I get down to business let me quickly give readers a brief history regarding the song. It was performed by Bahamian group Baha Men and released in July 26, 2000 as a single. The song was originally written by composer Anslem Douglas (the original song was titled ‘Doggie’). The lyrics are about disrespectful men who hit on women at a party.

xxxxxxxx
‘Black Thursday’ was how someone described Delta Force’s attack on a Circuit Court four days ago in Kumasi the Ashanti regional capital. The vigilante group of the governing New Patriotic Party (NPP) had struck again. This was the militants’ second attack in less than three weeks. On Friday 24 March 2017, Delta Force forced itself or invaded the Ashanti Regional Security Council Head Office.

In that attack, there was a forceful removal of a lawfully-appointed public official. Blood was shed and property was destroyed. And just about 17 days, of that bizarre attack another state institution has suffered similar fate---reeling fear and concern amongst the populace in the Garden City and across the country.

Their target was the Kumasi circuit court. Where Again?

I said at the court. The third arm of the government ---the judiciary or court(s) has the responsibility to apply the laws to specific cases and settle all disputes. The Judiciary also adjudicates sand interpret s the laws. This was what the court was doing –performing its required constitutional duty, when it got attacked.

But why would someone or a group choose a court as target? Why would someone dare to degrade, demean and disgrace the very institution we the people have reposed our trust in? Well, given the scenario, it appeared, that thought didn’t even cross the minds of the militants, I suppose. It must have been in their rear view mirror. It could be concluded that the group had already made up their minds and they would strike at all cost.

It was on Thursday 66 April, 2017. It’s understood 13 of the group’s members were standing trial for the March 24 attack.

The trial judge had no idea what was shaping up. He’d no clue whatsoever that his cool chamber would in no time be set ablaze as in action. A sake-up was in the offing. From afar the thunder had roared like a lion. The macho-men were soldiering on to the court as though there were on a warpath. They stormed the court and what looked like a Hollywood movie-style whisked all 13 members away.

Did their colleagues in court know about the plot?
Maybe they did or maybe not. Remember it happened to former President John Rawlings after his 5th May Uprising. He’d to be freed by his colleague soldiers from a fortified security facility somewhere in Accra.

Local media reports indicated the 13, who were remanded into prison custody and billed to reappear on 20 April, were taken away through the backdoor of the judge’s chamber by their supporters.

As earlier pointed out the suspects were standing trial for assaulting Ashanti regional security coordinator George Agyei on March 24 after his appointment. The group contended that Mr. Agyei wasn’t their preferred candidate.

The Unknown
There are several things we don’t know about this group, regarding its modus operandi. However, the good news is that, all 13 accused persons had since turned themselves in to the police. But there still remain some unknowns. No one knows the group’s next target or place to attack. Would its next target be Manhyia---- the seat of the Ashanti monarch or would it be the Kumasi Airport?

If they storm the Kumasi Airport they could hijack (let’s assume there’s a pilot among them) an airplane and fly to the Flagstaff House in a matter of minutes. Right, but what happens thereafter? Indeed we don’t know where and we also have no idea as to when. When would the group strike again? How would they strike? It’s an issue that seems to bother many.

Suffice to say, up to this stage, we’ve all been left in the unknown world but armed with predictions and speculations. We have no knowledge of what’s going to happen tomorrow. The group is acting like a wild weather—unpredictable. When you think it’s going to rain it rather pours amid thunder storm. Who knows tomorrow, it could be a tornado?

Call for Punishment
Meanwhile the first vice chairman of the party Fredrick Fredua Anto, has said members of the Delta Forces who are found guilty of attacking the judiciary should be ‘punished’, He sees the group’s action as an affront to the judiciary as an institution and a dent on our democracy.

Mr. Anto told a local radio station in Accra Class FM that: “the rules are there” and the accused, if found culpable, must face the law.’ According to the station he wasn’t happy about the action of the vigilante group given what their conduct has brought the party into “disrepute”.

It remains to be observed whether the goodwill the NPP has been enjoying since the party’s election victory in last December would be able to stand the test of time. Certainly, much of that would be predicated on the activities of these vigilante groups. Already there’d been signs of romance fatigue. It seems the fangled love between the party and the general public is shaking. People are getting fed-up with the news of Invincible and Delta attacks on innocent citizens. No doubt the majority of Ghanaians like the president, Akufo-Addo but for how long could this wild ride go on?

Readers will recall when the first incident occurred there were varied reactions across the nation. The uproar was huge. Even people deemed pro-NPP couldn’t zip-up their mouths. It seemed the attacks were snowballing.

Social Commentator Casely Hayford couldn’t hide his frustration. He said this in the wake of the March 24 attack: “People invading political party headquarters with cutlasses and machetes and fighting among themselves and nobody is arrested?

This is where it is all going wrong…Because we think it is politically not going to help us we will not do the right thing. It is too much. I am tired of it,” he fumed.

A former minister of state in the Mahama administration Oye Lithur wrote this in a letter addressed to the President, the Interior minister and the national security coordinator:

“The forceful removal of a lawfully appointed public official was violent and blood was shed, with Government property being destroyed. This adds on to the list of forceful seizure and management of state property, that is, the Kintampo Falls tourist facility, seizure of toll booths, seizure of vehicles etc.

There have been numerous reports of extra judicial and unlawful violent acts by these groups. Ghanaians are peace loving and law abiding. We have been sustained as a nation by respect for the rule of law. We do not want this violence to escalate; neither do we want this situation to degenerate.”

The Fallout
In the wake of the Delta Force’s attacks there seemed to be a division among the Elephant family as to what to do and how to deal with the group. Some of the stalwarts have expressed their dissatisfaction about the way the group’s issue was handled.

Notable among them is the (NPP Member of Parliament for Assin Central, Kennedy Agyapong. Mr. Agyapong had threatened to bring down the party if Kan Dapaah, the Minister of National Security did not stop his threats.

The Minister in an interview with the local media was alleged to have made some comments that did not sit well with the legislator.

But responding to the Minister, the MP took a swipe at him and questioned his loyalty to the party. He also criticised the Delta Force over their attack on the Kumasi Circuit Court. He underscored that, although he appreciates and supports the efforts of the group, he is unable to back them following their actions on Thursday.

The tough-talking lawmaker described Kan Dapaah as a ‘disaster’ and further blasted him for poorly handling the Kumasi Security Coordinating Council attack.

In the meanwhile the National Security Minister, Mr. Kan Dapaah has denied reports suggesting that he insulted the Assin Central MP over the attacks by Delta Force.

According to Mr. Kan Dapaah, the stories making rounds are fabricated and are intended at damaging his hard earned reputation.

Mr. Dapaah had been quoted in earlier reports to have asked Mr. Agyapong to “shut up” because he was naïve about matters of national security.

However, the minister in reaction to the report has stated categorically that in as much as many might disagree with his approach to dealing with issues of national security, he never expressed any words of insult: “Because my focus has and remains ensuring that the citizenry abide by the rule of law despite their political affiliations,” he gave the assurance.

Bear with us on the border closure — Oppong Nkrumah to resid...
16 minutes ago