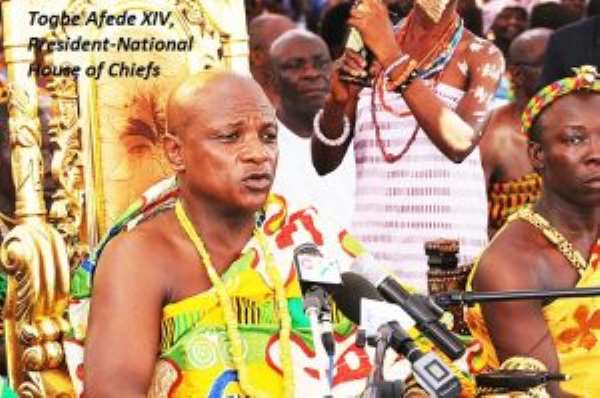 Members of the Somey-Klikor Natives Association have called on the Volta Regional House of Chiefs, opinion leaders and citizens, both at home and abroad to intervene in the chieftaincy dispute that has rocked the Somey Traditional Area for an amicable resolution.

The Association also appealed to all parties involved in the impasse to try and bring the situation under control to allow peace to prevail in the area by using the Alternative Conflict Resolution (ACR) procedure.

This was contained in a press statement dated Monday April 3, 2017 and signed by Sylvester E. K. Nazah and Wisdom Peter Awuku, President and Secretary/Spokesperson respectively of the Association.

Below is the full detail of the press release, under the caption: “The need for a quick resolution of the chieftaincy disputes in the Somey paramountcy”:

The members of the Somey-Klikor Natives Association, Home and abroad, wish to call on all parties in the current chieftaincy impasse that has hit the Somey Traditional Area, particularly, the Somey Paramountcy, to find an amicable solution to the problem.

The Association has also called on the Volta Regional House of Chiefs, opinion leaders and citizens, home and abroad, of the Somey Traditional Area to intervene for an amicable resolution and the use of Alternative Conflict Resolution to deal with the issue.

We wish to caution all others who are fanning the conflict, either covertly or overtly, to desist from any act, to undermine the laid down chieftaincy procedures in the selection and installation of a Makorsor .

These characters are being advised, in their own interest and in the interest of the Somey Traditional Area, to desist from any divisive tendencies.

We believe that the immediate resolution of this unfortunate dispute would ensure the installation of a new Makorsor and the eventual burial of the late Makorsor, Torgbui Hor II.

The delay in the installation of a new Makorsor, is brewing tension, keeping the people of this Traditional Area on edge and unsure when the next line of action would be taken.

It must be added that the delay in settling this disputes has stalled development in the area, particularly, the celebration of the Somey Tutu za, the traditional festival of the area.

The significance of this festival to the economic development and the tourism boost of the area in particular, and the region and the country in general, cannot be underestimated.

Background
The late Makorsor, Torgbui Hor II died in September 2012 with the subsequent installation of

Torgbui Adamah III as the Makorsor.
However, another faction emerged with the installation of Torgbui Nukpornuku II, leading to tension within the Paramountcy. Torgbui Sape Agbo (Acting)

There was, therefore, an interlocutory injunction placed on any of the factions by the Judicial Committee of the Volta Regional House of Chief, from being outdoored as the new Makorsor.

Tension was, however, heightened as the Adama family decided to outdoor Torgbui Adama III on Saturday, March 12, 2016, despite the interlocutory injunction placed on the outdooring of the Chief by any of the factions.

Nukpornuku family, who said the peace of the area would be breached if the outdooring was allowed to come off. The Adama Gate has also withdrawn the case from the court for an amicable settlement.

There has since been uncertainty in the area as a result of the long silence.

It is against this background that SOKLINASS is issuing this statement with an appeal to all factions to allow peace to prevail and allow the rightful person to the throne to be considered for installation and outdooring.

A peaceful resolution would ensure that the late paramount chief of Somey , Torgbui Hor II, is laid to rest finally. Torgbui Hor II had reigned as Makorsor of the Somey Traditional Area from 1971 to 2012.

It is refreshing to note that the Acting Makorsor, Torgbui Sape Agbo, has assured the feuding parties and the people of the Somey Traditional Area that as soon as the court determines who is qualified to be made the Makorsor, he would hand over peacefully. But for now we can’t have two captains in one ship thinking that there will be peace.

Therefore, he is seeking a court injunction on both Adama and Nukpornuku to step aside for him and people of Somey to make sure that the late Torgbui Hor II is given a befitting burial for them to take time and resolve their differences.

The Association is however, worried over the delay in the protracted case.

The Association is demanding the following answers:

iii. What is the roadmap to the installation and outdoor of a new Makorsor and the final burial of the late Makorsor Torgbui Hor II?

It is the hope of this association that the king-makers would provide answers to the above nagging questions for the roadmap, for a lasting peace in the area.

The Association wishes to pledge its unflinching support and its readiness to avail itself to any group or individuals who have the interest of the Somey Traditional Area at heart and to ensure peace.

We want to remind both families in this impasse that we are all from the same family lineage and there is no need to fight each other. In the long term, the Kingmakers must ensure a succession plan for the smooth transition of power from one king to the other in the Somey

Nkegbe and other several people getting wounded. We demand government intervention in this matter to avert any further clashes and loss of lives. We appeal to the Regional Minister to investigate the circumstances where the salt industry has crippled other livelihood activities in the area.

High on the agenda is the destruction of the source of good drinking water that our people have been used to. The current situation is that the wells in the area have been turned into salty water. We hear the people have to rely on buying sachet water commonly known as pure water for domestic activities including drinking.

The association wants a full disclosure of the contract between the government and the Indian investors. It is one of the reasons behind the confusion.

Finally, we urge every native of the Somey Traditional Area to remain calm and peaceful as our chiefs and opinion leaders settle their differences amicably.