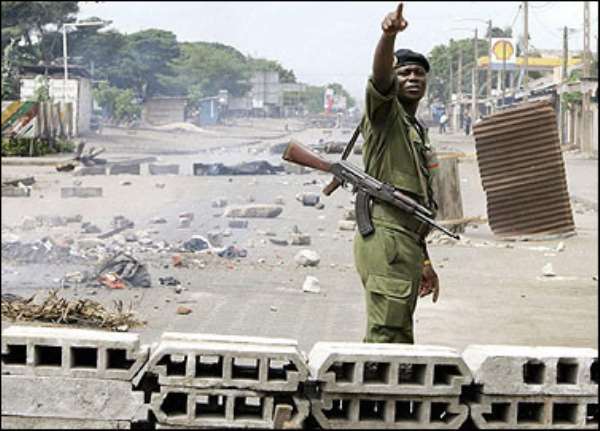 Aflao, April 27, GNA - Three people were injured when Togolese soldiers fired across the Ghana/Togo frontier at Aflao shortly after the declaration of the results of the presidential election on Tuesday. Mr King Kosmos 28, an artisan and two basic school pupils, Linda Donu, 10 and Mabel Ahedor, 13 are on admission at the Aflao District Government Hospital.

Mrs Elizabeth Amenu-Kpornyo, a Senior Nursing Officer, said Linda would have to undergo an operation to remove a bullet lodged in the right side of her head.

Ghanaian order security officials told the GNA that Togolese soldiers shot into a crowd of Ghanaians who hooted at them from Aflao, wounding the three.

The officials said the crowd had ignored cautions from Ghanaian security personnel on patrol duties to avoid getting close to the wire fence in view of the security risk involved.

Kosmos, one of the victims, however, denied any hooting incident, saying he was in the area playing games with friends when he was hit. The Togo side of the border remained closed.