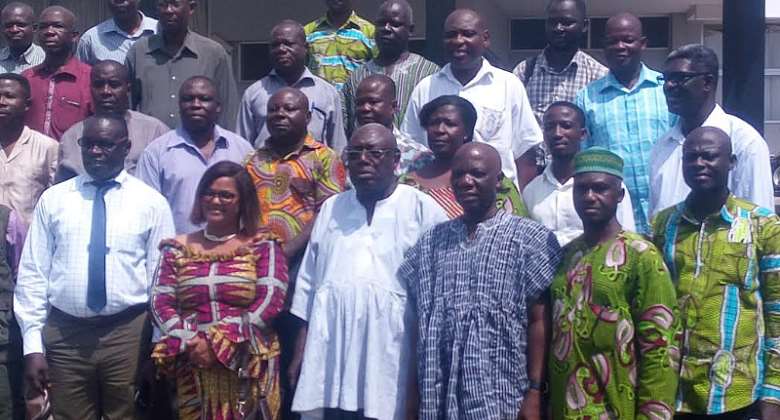 Members of the committee in a group photograph

The Western Regional Technical Committee for the implementation of the 'Planting for Food and Jobs' campaign has been inaugurated with a call on the youth and the public to go into commercial farming.

It aims to help provide direct and indirect job opportunities for about 750,000 Ghanaians.

Inaugurating the committee at the Residency in Sekondi on Wednesday, Kwadwo Owusu Ady, an official from the Ministry of Agriculture in Accra, noted that the initiative would involve all the districts and that it was going to add about GH¢1.4 billion to the rural economy.

He said that the government was determined to make agriculture a priority sector in terms of public investment and that the programme had been carefully planned to cater for every aspect of the food supply chain.

He therefore called on the teeming unemployed youth to take advantage of the programme to enable them earn income and become self-sufficient to boost food security.

He indicated that the programme would target some selected cereals, including rice, maize in all the regions but in the three Northern regions the concentration would be on soya-bean and sorghum.

He called for strong support by the people to enable the programme to become a huge success to ensure food security and give jobs to the youth.

“The District Assemblies will be tasked to identify and register farmers in each of the districts. The selected farmers will be supported with subsidized improved seeds, fertilizers and extension services,” he added.

The initiative is long overdue looking at the fact that agriculture is the largest employer in the country and has the potential to solve the country's economic problems and joblessness, the Western Regional Minister, Dr Kweku Afriyie, mentioned.

He therefore advised the unemployed youth to go into farming to help increase food and raw material production instead of seeking non-existent white-collar jobs.

Dr Afriyie, a farmer, stressed that proper investment would make agriculture lucrative and called on the youth to venture into farming to become self-reliant and employers in the future.

The Regional Director of Agriculture, Alhaji Zublim Salifu, mentioned that the target of the programme was to increase food production and boost returns to the farmer.

He explained that the technical team had been constituted in order to coordinate and monitor the main activities of the campaign.

According to him, the regional technical committee would also monitor the implementation of the programme in the municipalities and districts.