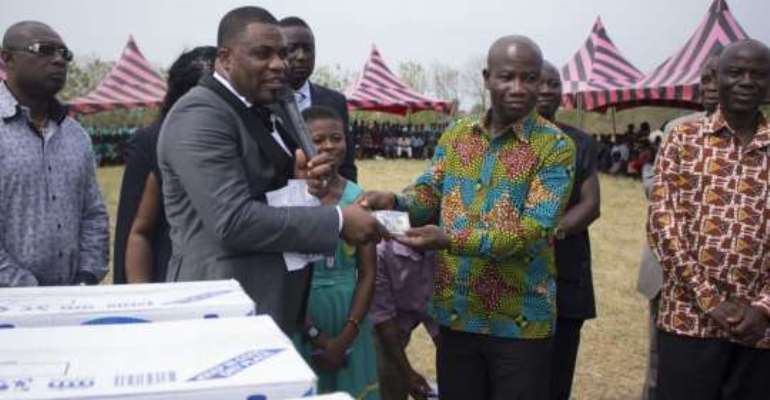 Accra, April 2, GNA - Bishop Kofi Adonteng Boateng of the Divine Word Ministry International, a United States (US) based preacher, has donated a sum of thirteen thousand dollars ($13,000) to the bereaved families in the Kintampo rainstorm tragedy.

The church also donated various items including bags of rice, assorted drinks and biscuits worth thousands of dollars to the families as well as the Wenchi Senior High School.

One of the teachers, who was a victim and is on admission at the Wenchi Government Hospital, was also given an amount of one thousand dollars ($1000) for his bills.

An amount of eighty- eight thousand Ghana Cedis (GHS 88,000) was donated to the families of the victims and the school.

Bishop Boateng said the Church had in the past made similar donations to the Komfo Anokye and Korle- Bu Hospitals, as such, the donation was in fulfilment of the scriptures which require that the needy in society, be assisted.

He pledged to put up a library for the school and also spoke about some of the church's ambitious projects including an initiative dubbed: 'the next president'.

Bishop Boateng said this initiative is aimed at discovering and nurturing some brilliant but needy children into future generational scholars who will take up the mantle of leadership in the future.

Mr Foster Antwi Boateng, the Headmaster of the Wench Senior High School, who received the money and items on behalf of the school, thanked the Bishop and his church for their kind gesture.

Mr Antwi said there was a need for the Tourism Ministry to make available rescue operation teams at the various tourist sites to respond to accidents that occur when people visit such places.

He said there should be proper safety mechanisms in place at all times to ensure that disasters that occur do not claim lives and called on Ghanaians to remember the school in prayers.

The over 20 members of the ministry who visited the students consoled and entreated them to be steadfast in the Lord.