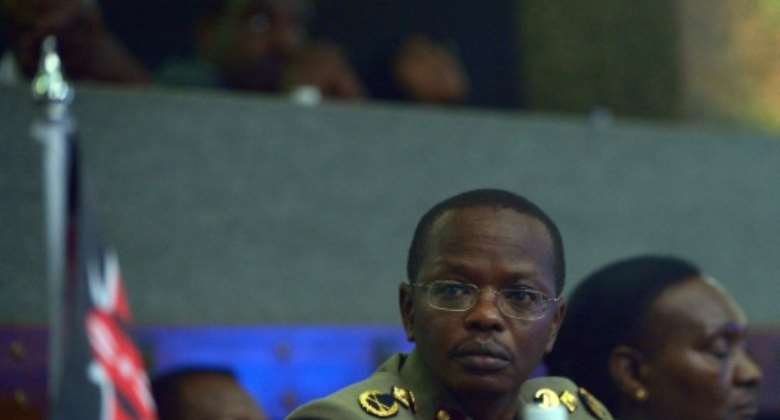 Kenya's police Inspector General Joseph Boinnet, seen in 2015, said, "I have seen the video and I condemn those actions. Investigations have already started and I can assure you action will be taken against officers involved". By TONY KARUMBA (AFP/File)

Nairobi (AFP) - Kenya's police chief Saturday ordered an investigation after a video circulated on social media showing a police officer killing a disarmed man in cold blood in front of a crowd of onlookers in Nairobi.

"I have ordered thorough investigations on the shooting incident that occurred in Eastleigh," a majority Somali neighbourhood in the Kenyan capital, Inspector General Joseph Boinnet told Capital FM News.

"I have seen the video and I condemn those actions. Investigations have already started and I can assure you action will be taken against officers involved," he said.

Amateur mobile phone footage first shows one man lying lifeless in a pool of blood having been shot shortly before by police.

At his side, two plain-clothes policemen are holding and questioning another young man. Then one of the officers fires several rounds at point-blank range at the suspect.

The officer is seen delivering a final shot to the head of the injured and bleeding man.

The incident has again raised concerns about police abuse in Kenya and outrage at the apparent "brazen execution of two young men", said the Law Society of Kenya.

"The scene is chilling and a frightening reminder that there are elements of the security forces who murder Kenyan citizens without hesitation and in violation of all laws," said Isaac Okero, the society's president.

"Even if they were criminal suspects, whatever the nature of their alleged offences or criminal activities, those young men were entitled to due process," Okero added.

Police say they were pursuing two men in their 20s as suspected members of the notorious Superpower gang and caught up with them outside a shopping mall.

"These boys have given us sleepless nights because they commit robberies and kill, then they relocate and resurface," a policeman with knowledge of the gang who requested anonymity told AFP.

He also alleged the two were involved in the deaths of several police officers, leading to the manhunt.

The Kenyan lawyers group called for the immediate arrest and prosecution of the officers shown in the video, denouncing what it called "the culture of extrajudicial executions that is now so evidently entrenched in the national police service."

That same month, four Kenyan policemen were charged over the high-profile murders of a human rights lawyer and two others -- another case that sparked outrage.

Kenya's police force has been accused in the past of running hit squads targeting those investigating allegations of police abuse.