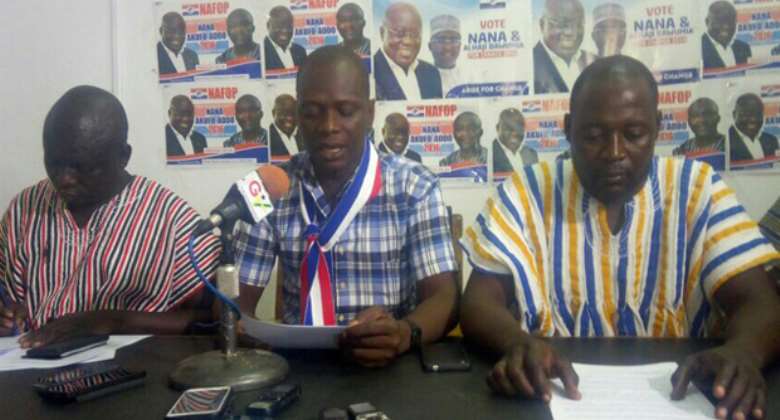 The Leadership of the Upper East Youth Wing of the New Patriotic Party(NPP) has commended the President, Nana Akufo-Addo for appointing some persons from the region to serve in his government.

In their view, the gesture is a big motivation for many people in the region, especially the youth, who are aspiring to occupy leadership positions in politics in the near future.

A statement read at a press conference in Bolgatanga by the deputy regional youth organizer of the NPP, Samuel Atiru Amangdedam said the Upper East Region has duly been “served” and hoped the privileged appointees will work hard to direct government and investors’ attention to the region to facilitate speedy development and job creation.

Appointees from the Upper East Region include, Member of Parliament for Navrongo Central, Hon. Joseph Kofi Adda, as Minister for Sanitation and Water Resources, Member of Parliament for Tempane, Hon. Joseph Dindiok Kpemka, as Deputy Attorney General and Mustapha Hamid, as Information Minister. Others are Fatimah Abubakar, Deputy Communication Director at the Presidency and Bashiru Ibrahim, National Deputy Director in charge of Operations at the National Youth Employment Authority.

Touching on the appointment of Bashiru Ibrahim to the National Office of the National Youth Employment Authority, Samuel Atiru, said he is hardworking and knows the problems of the youth and how to handle them.

According to him, Mr. Bashiru, while in office as the Upper East Regional Youth Organizer mobilized the youth to accept the NPP’s message and got them to support Nana Addo’s bid to become the President of Ghana, and he is very hopeful that he will do same to get the youth of the country to support the ideas of the President and the need to work hard to attain success.

The NPP Youth promised to work hard to support the vision of the President for their communities and also their personal development.