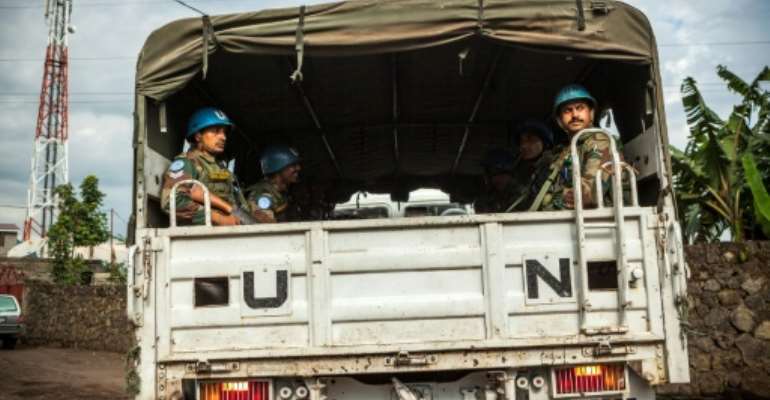 The UN force of 19,815 uniformed personnel in DR Congo will be reduced to 18,316, according to a draft council resolution seen by AFP. By Eduardo SOTERAS (AFP/File)

United Nations (United States) (AFP) - The United Nations Security Council will vote Friday to cut the number of troops and police in its peacekeeping mission in the Democratic Republic of Congo by around seven percent.

The lawless central African giant is under pressure to hold key elections this year, despite fighting between armed factions, political chaos and widespread corruption.

But UN member states, in particular President Donald Trump's new US administration, want to scale back UN spending on its missions around the globe.

According to a draft council resolution seen by AFP, which diplomats expected to pass unanimously, the force of 19,815 uniformed personnel will be reduced to 18,316.

The military part of the UN Mission, known as MONUSCO, was authorized to deploy 18,232 Blue Helmets.

This will be reduced under the draft plan to 16,215, but diplomats said that the actual force currently on the ground was already down to around 17,000.

"The most important thing is that this figure was decided after a study of the situation on the ground, the mandate of the mission and its needs," one diplomat said.

"It wasn't cut just any old how, it preserves the mission's ability to operate."

France had warned against a too dramatic cut in the size of the forces, warning that it might endanger what little progress has been made towards stabilizing the DRC.

But France's UN ambassador pronounced himself satisfied with the draft resolution.

"You know it is the outcome of an important negotiation," Francois Delattre told reporters.

"And so if things go well we will go for a vote tomorrow at noon. And I think it is important for DRC, for MONUSCO and for peacekeeping in general. This is a good agreement."

On Wednesday, the US ambassador to the United Nations Nikki Haley said she will use her presidency of the Security Council next month to launch a review of peacekeeping.

"We will go back to first principles and ask hard questions," she told New York think tank he Council of Foreign Relations.

"What was the original intent of the mission? Is the mission achieving its objective. Do we have an exit plan and is there accountability?

"As it stands the lack of this basic kind of basic evaluation in the UN missions is shocking."

Meanwhile, the situation on the ground in the DRC is tense.

On the last day of 2016, President Joseph Kabila signed a deal to share power with the opposition as officials work to set up national elections later this year.

The agreement was never fully implemented, despite international pressure, and an opposition umbrella group has called for a general strike from Monday to protest.

Kabila first took power in 2001 to replace his assassinated father as war ravaged the country.

His unwillingness to step down and enable elections at the end of his constitutional mandate last year led to protests in which at least 17 people were killed.

Under a deal brokered by the country's influential Roman Catholic bishops, Kabila was allowed to stay in office in tandem with a transitional body and a new premier.

But talks on implementing the accord appear to have broken down, and violence has flared.

Last week, 39 police were killed in an ambush by rebels in the remote central region of Kasai.

In a separate incident, two foreign UN experts, an American and a Swede, were killed in the same region.

On Tuesday, the United Nations, European Union and the African Union called for an opposition figure to be named premier as had been agreed under the December 31 deal.

"A step forward of this kind will help the country's stabilization process, the restoration of public order... and the holding of elections as scheduled," they said.

The opposition coalition was formed around Etienne Tshisekedi, a veteran foe of successive Kinshasa regimes who died in Brussels in February, aged 84.