In Defense Of 110 Ministers 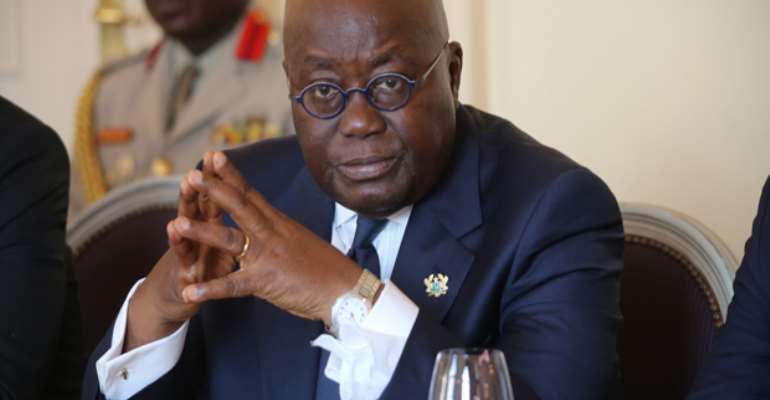 Those who are making cacophonous noise about President Akufo Addo's 110 appointed ministers have not appreciated the huge task ahead. If they are simply critiquing the appointment of these able ladies and gentlemen then excuse me, to say it will not fly. There is a job to do and the job demands more hands on board. There was this guy who was ignorantly analyzing the issue and comparing the United States cabinet to that of Ghana. The guy did not know that the US is a Federal State with governors in all the states.

The US has Secretaries of State, Treasury, Defense, Interior, Agriculture, Commerce, Labor, Health and Human Services, Housing and Human Development, Transportation, Energy, Education and Veterans Affairs. The Secretary of Homeland Security was created by former President George Walter Bush after the September 11 attack where hijacked planes obliterated the World Trade Center and nearly smashed into the Pentagon. The department used to be called United States Department of Homeland Security (DHS). Addressing the Joint Session of Congress in the House Chamber, nine days after the attack, former President Bush announced that he was going to create a cabinet position of the United States Federal Government with responsibilities in public security, comparable to what we call Ministry of Interior in Ghana. Ever heard of any terrorist attack on the US soil after the one which happened on 11th September 2001? That is how governments solve problems.

The United States of America has practiced democracy for more than two hundred years and the country is well developed so the US doesn't need the following ministries which we have in Ghana. The US doesn't need any ministry in charge of the zongos since there are no zongos in the US. The Railway network in the US is so much developed that you do not need a special ministry to superintend the sector. You do not expect the US to create a ministry of water resources and sanitation since Americans do not litter around and do 'galamsey' to destroy their water bodies. Similarly, the US doesn't need any ministry of Gender and Children because they know their rights and there are other institutions to take care of that. And come to think of this: do you think the US needs a ministry in charge of Fisheries and Aquaculture? Or do you think the US needs the Ministry of Tourism, Creative Arts and Culture? Ghana needs all the above mentioned ministries because we are on our way to recovery after many years of mismanagement of the economy coupled with unnecessary military interventions.

In the run-up to the 2008 general election, the NDC wrote in their Manifesto that when voted into power the government will get rid of filth in Accra and other big cities. By the time they left office in 2016 the whole nation was engulfed in filth with the worst in Accra, the capital town of Ghana. If President Akufo Addo could solve this problem with his new Ministry of Water Resources and Sanitation, so be it. And if the newly created Ministry of Railway Development can bring back the smiles that we used to have in those days when the railway network of Ghana was something that we used to be proud of, why not?

For me, the issue of the large size of our ministers should be juxtaposed with what they are going to do to bring the country out of the woods that we have found ourselves in. The Akans say too many meat does not spoil the soup. I believe, in no time, these ministers and their deputies will turn things around and Ghana will rise up again to join the comity of nations. And when that time comes to pass those who are who are kicking against the number of ministers appointed by the current government will realize that there are different styles in governance. The NDC appointed nearly ninety ministers but at the end of the day, they messed up things. If for example the NDC government had an effective minister in charge of Monitoring and Evaluation, the country would have had value for money which we did not see in their era.

I sincerely and rightly believe the minister in charge of Monitoring and Evaluation will not sit down unconcerned while contractors execute shoddy works and smile their way to the banks. MMDCEs, Consultants and Civil Servants working in the various Assemblies should be the target for monitoring. Some consultants collude with Civil Servants to bloat contract sums and later receive their usual 10% kickback. Even though MMDCEs do not sign cheques, they are the ones who authorize payments to contractors. They too do not do so for nothing. When the NDC was in power, the issue of 10% kickback became institutionalized and one did not need to remind a contractor to pay the kickback since they knew if they failed to do so, they will never win any bid next time around. In those days, because majority of the MMDCEs had never worked in an office before, the Civil Servants seized the opportunity to grow rich at the expense of the masses. The results were that projects embarked upon by these contractors could not withstand the test of time. President Akufo Addo should instruct his minister of Monitoring and Evaluation to put his ears on the ground.

If you have not known and seen me before, I want to seize this opportunity to announce to you that I am a zongo boy, irrepressible, hard nut to crack and above all, one who fears no police. If I were to be a student today and my teacher asks me to write an essay titled “The Happiest Day In my Life”, I would have chosen the day that President Akufo Addo announced to the world that he was going to create a Ministry for Inner City and Zongo Development. To add sugar to honey, the president also said he was going to create a Zongo Development Fund. Since we started the 4th Republican journey some 24 years ago, no government ever thought of this lofty idea until Nana Akufo Addo held the reins of power. Perhaps the whole idea was conceived by Nana Addo because his father, mother, himself and his siblings grew up in Nima, the largest Zongo in Ghana.

The Akans say if the fool wises up, the game ends there and then. That is why during the 2016 general election, the people of the Zongos, including even some NDC supporters voted against the NDC. Since 1992, the NDC liars succeeded in convincing the Zongo people that if they voted for the NPP, they (the zongo people) will be driven away to their respective countries where their forefathers came from to dwell in Ghana. And because many people who live in the Zongos could trace their roots to countries like Burkina Faso, Nigeria, Niger, Mali, Ivory Coast etc, they swallowed the lies hook, line and sinker. I have had cause to write for the umpteenth time that liars have short legs. When the Zongo people saw the light, the NDC lost power miserably and now they have set up a team to go round and find out the cause of their abysmal performance in the 2016 general election. In his final report, Professor Kwesi Botchwey should add the issue of the disappointment of the Zongo people.

In 2020, what are these pathological liars going to tell the people of the Zongos again now that they have got a ministry which is facilitating the development of the Zongos and a fund created for their welfare? That is the way God punishes human beings. When God picks a stone with His mighty hand, He takes time to throw it. Assalam Aleikum!!