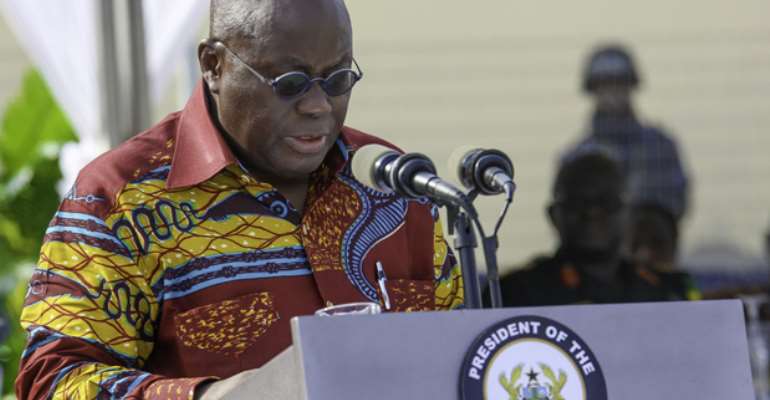 Warmest felicitations, Mr President! As a fellow citizen of this country as well as a fellow patriot riding on the Great Elephant, I'm sure you wouldn't regard my epistle as an intrusion into your mail box. I know you would rather see it as a letter from a concerned citizen who wishes to communicate with his president. This is my first time of ever writing to you and I'm excited to have the opportunity to do so.

Please let me take this opportunity to first congratulate you on ascending the highest throne of the land. I couldn't control my tears during your inauguration as I saw the so-called “short man” holding the presidential sword and reciting the oath of office. It was a day many believed would never ever come to pass. But the Bearded Old Man above has proven to all and sundry that His ways are different from the ways of mortals like us.

Your ascension to the presidential throne teaches many lessons. One lesson it teaches us is perseverance. You persevered for close to four decades before finally achieving your target. Many a person would have given up; but not Nana Dee. It is indeed a trait worthy of emulation.

Your success also teaches us not to allow our detractors to slow us down with their negative vibes. Who does not know that you are the most vilified politician of our time? But you did not allow the insults and character assassinations to deter you. They rather emboldened and made you more determined to prove your detractors wrong. What a strong character you have!

As president, one of your first responsibilities is to get a team to help you redeem the numerous promises you made to your compatriots during the campaign. The response that greeted the appointment of 110 ministers for your government was largely negative. I, however, do support the argument that delivering the goodies would make nonsense of the bloated government argument.

Mr President, I voted for change and I know you would deliver the change we so desire. But I'm a little worried. I'm worried because the rate of change is not as fast as I expected. The rate is so slow that some tend to believe it is business as usual.

I know you have “big plans” for this country. Indeed, I heard you talk about them in faraway Switzerland. But please start with the small plans oo!

Sometimes it is good to have big plans. But trust me when I say this country does not need many big plans at this moment. What the country needs are “small, small plans” that would reduce bureaucracy and make the systems run efficiently and effectively. Regular and efficient delivery of utilities and health delivery systems do not need big plans, do they?

I watched Seth Kwame Boateng's “Next To Die” and was shocked to the bone to learn that an average of four (4) babies die at the Komfo Anokye Hospital as a result of lack of space and logistics at the hospital. Obviously, we do not need grandiose plans to solve such serious problems.

I know you are not happy about the situation at Komfo Anokye and other health facilities in the country. I also know that efforts are being made to improve the situation; but the rate seems to be slow considering the fact that lives are lost on daily basis. That is my worry!

Mr President, I'm excited to know that you are still committed to making corruption unattractive under your watch as president. Like many of your compatriots, I can't wait to see the Special Prosecutor begin chasing the creators, looters and sharers of the country's resources. Some may call it “witch-hunting”. But I ask; why be afraid of a witch-hunter when you know you are neither a witch nor a wizard? For sure, it is only witches and wizards who get jittery at the mention of a “witch-hunter”.

I'm even more excited to know that you have not been infected by the dreaded dead-goat syndrome. Unlike your predecessor, you did not resort to insults and innuendoes when there was brouhaha about your perceived bloated ministerial appointments. Rather, you sought to explain to your compatriots the rationale behind the seeming bloated government. That is the kind of man I want as my president.

It is my hope and prayer that you succeed. The creation of jobs, the death and burial of “dumsor” and reducing the Cedi's sprint would go a long way to improve living standards, thereby raising confidence in our democratic system. I pray for you to succeed because I shudder to imagine the consequences of the opposite.

Lest I forget, I was very pleased when news reached me that my boss, Mrs Gina Ama Blay, had been appointed Ambassador to Germany. With a first degree in International Relations, how I wish I were her deputy? I was equally elated to hear the appointment of my good friend Iddrissu Musah, aka Musah Superior, as the Tamale Metropolitan Chief Executive. Believe me when I say the duo will deliver.

While I patiently await my appointment from your humble self, please be reminded that I will not shirk my responsibility of drawing your attention to wrong- doings of your appointees. And please do remind all your appointees about the lurking vultures waiting to feast on their carcass, if they fail.

I definitely will write to you again, Deo volente!

I regret connecting the guy who secretly recorded Akufo Addo...
41 minutes ago

Let’s go to swear Nogokpo if you're not corrupt – Fiifi Kwet...
43 minutes ago