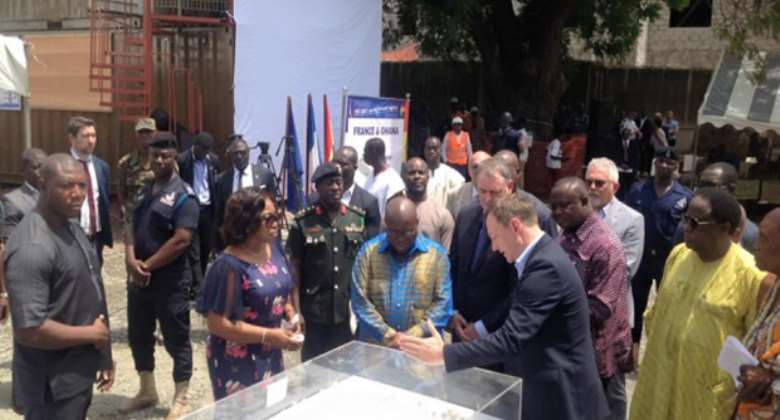 Claude Guyon (right), French Architect, explaining the architectural design of the building to President Akufo-Addo and his entourage

President Akufo-Addo could not hide his joy when he laid the foundation stone for the construction of the new French embassy in Accra on Friday.

That was due to the controversy surrounding the existing French embassy building, which is located close to Ghana's presidential palace, the Flagstaff House, thereby raising security concerns.

Admission
Speaking at the new site for the embassy, which is located at Cantonments in Accra, President Akufo-Addo stated, “It is an admitting experience and a moment of considerable joy to witness this occasion, as it will be recalled that the negotiations for the relocation of the French Embassy has been saddled with mixed-feelings and a certain undue amount of anxieties.”

That, he said was because “Change can be uncomfortable; however, this change from the old site to the current location has occurred within manageable limits and I'm glad to see that the design of the new building seems to have been inspired by that of the old.

“I'm confident that the edifice of the new chancery building will be the foundation stone and continuation of the growing interest of France in Ghana's development and progress.”

The president underscored the fact that Ghana continues to benefit from French support in the areas of health, rural water supply, agriculture, construction, telecommunication and industry, for which he expressed gratitude.

Only last month, February, he indicated that Air France commences its flights between Paris and Accra.

According to President Akufo-Addo, it is on record that 170 French projects are in Ghana, with services as the leading sector.

“This growing interest among French companies is welcome; but I want to say that Ghana recognizes the importance of the security of such investments and will ensure that our relevant institutions stand ready to protect them,” he assured.

The president talked of the cordial relation between the two countries which was established after independence, growing from strength to strength.

“Our relation has been strengthened based on common value and a shared vision of our future together; strong belief in democracy, human rights and the rule of law are the basis of this shared vision for the mutual prosperity of our two people,” he emphasized.

Expectation
He expressed the hope that the company contracted to construct the new embassy building – Micheletti and Co. – would deliver an efficient and timely work “so that its opening will help to expand the already cordial relation between Ghana and France.”

The French Ambassador to Ghana, Francois Pujolas, thanked the government and people of Ghana for their hospitality and warmth.

For him, the construction of the building is symbolic of the partnership between the two countries since it enables both sides to work together, in spite of their cultural, linguistic or whatever differences.