Operations against Kony's LRA 'coming to an end': US general 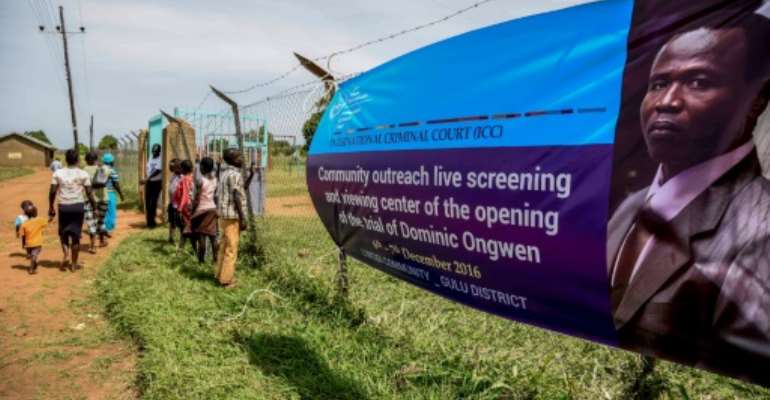 People walk near a banner of former child soldier-turned-warlord Dominic Ongwen before the screening of the start of his ICC (International Criminal Court) trial in Lukodi, Uganda on December 6, 2016. By ISAAC KASAMANI (AFP/File)

Washington (AFP) - The US military is wrapping up operations against the Lord's Resistance Army in central Africa, even though its leader Joseph Kony is still at large, a top US general said Friday.

"This thing is coming to an end," said General Thomas Waldhauser, head of the US military's Africa Command.

A self-styled mystic and prophet, Kony launched a bloody rebellion three decades ago seeking to impose his own version of the Ten Commandments on northern Uganda.

Waldhauser said "several hundred, maybe thousands" of Kony's footsoldiers had been killed in operations against the LRA, and that only about 100 now remain.

"This operation, although not achieving the ability to get to Kony himself, has essentially taken that group off the battlefield," he said.

"For the last several years, they've really been reduced to irrelevance."

The operation to hunt Kony and his bandits has cost between $600 and $800 million since 2011, the general added.

Kony is wanted by the International Criminal Court for crimes against humanity.

One of his top lieutenants, child soldier-turned-warlord Dominic Ongwen, is currently on trial there.

A concerted campaign by activists in the US led Barack Obama to sign a law in 2010 that allowed the deployment of around 100 special forces to work with regional armies to hunt down Kony.

One of the groups, Invisible Children, went on to produce a video two years later called "Kony 2012" that went viral with 100 million views in a matter of days, raising awareness of the rebel group's activities and its fugitive leader.

Waldhauser said America would remain engaged in the region to make sure the LRA doesn't make a comeback.