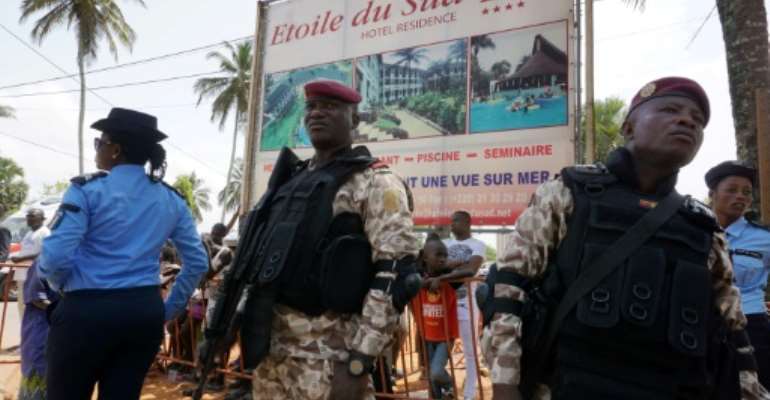 Soldiers stand near The Hotel Etoile du Sud on March 13, 2016, in Grand Bassam, during a commemoration ceremony for the first anniversary of the 2016 Grand Bassam beach terrorist attack, resulting in the death of 19 people. By ISSOUF SANOGO (AFP/File)

Ouagadougou (AFP) - A jihadist accused of masterminding a deadly attack in Ivory Coast is also suspected of having planned a major assault in Burkina Faso's capital last year, a senior official said Friday.

Now he is also believed to have been "head of operations" for the attack on a hotel and cafe in Ouagadougou in January 2016 that killed 30 people, said Colonel Serge Alain Ouedraogo of the Burkinabe gendarmerie.

"The weapons and equipment for the attack were carefully hidden in the tyre of a truck that Mimi had sent to Burkina by his lieutenant Ibrahim Ould Mohamed," Ouedraogo told a press conference.

The pair were arrested in Mali by troops from France's Barkhane anti-jihadist force -- Mimi in January this year, and his alleged accomplice last May.

Both were formerly living in a refugee camp in Djibo, northern Burkina Faso, Ouedraogo said.

After their arrests, the Burkinabe security ministry sent officials to Mali's capital Bamako and "obtained their confession of their involvement" in the Ouagadougou assault, the colonel said.

Mimi confessed to being in contact with an aide to Algerian extremist Mokhtar Belmokhtar of the Al-Murabitoun group, who offered him 10 millions CFA francs ($15,200, 15,000 euros) to carry out the "plan".

"He came several weeks before the Ouagadougou attack in the company of a white man with the first name Abderrahmane, using Nigerian identity cards for a reconnaissance mission," Ouedraogo said.

They had photographed the Cappuccino cafe and Splendid Hotel that would later be targeted in the attacks, along with another restaurant that was not hit, he said.