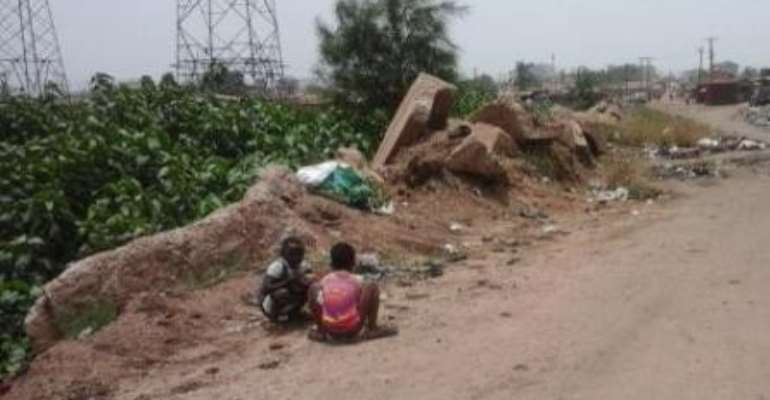 Ghana has been ranked the seventh dirtiest country in the world.

The same country has been ranked second in open defecation.

Now, the World Bank is threatening to pull out of an arrangement it has with the country to clean it up of open defecation which has been sinking the country for some time now.

The World Bank appears to be blaming the entrenched presence of open defecation in the Ghanaian body politic on a lack of political will on the ruling class to deal effectively with the problem.

This is understandable.
But what should we expect otherwise?
The neurons in the prosthetic brains of members of the ruling class are recycled from open defecation.

Or could it be that the neurons are directly made of open defecation?

And then our pseudo-scholars, political criminals and thieves pocket funds from international donors meant for combatting sanitation problems, while turning around and making a hyperbolic claim that nearly sixty percent of Ghanaians drink water laced with human waste, and we wonder why this dangerous cabal of pseudo-scholars and wicked politicians don’t have cholera, dysentery, polio, and typhoid in their prosthetic brains.

We organize elaborate independence anniversary celebrations while the open hands of plagiarized inaugural speeches, institutional corruption, democratization of mediocrity, and duopolistic dictatorship engulf the nation in a mournful chorus of galamsey-driven pollution and open defecation.

A nation of sanctimonious religious men and women, a nation that is drenched in universal filth—yes.

Is open defecation a mindset?
Or absence of political will?
Must the international community—the World Bank for that matter—provide us with toilet paper to wipe our dirty behinds?

Are we truly independent when we are surrounded by an ocean of open defecation?

Is Ghana a land of laws?
A land ruled by Eurocentric public dogs is bound to embrace open defecators.

Of course the World Bank cannot continue to provide with us funds to eradicate a national problem of our own making, funds that eventually end up in private pockets, when at the same time Akufo-Addo’s bloated government says to the international community his country is not poor, that the public treasury he inherited from his predecessor was not that starved of available cash as he has been trumpeting.

One hundred ministers—and we still have the effrontery to claim the public treasury is a desert?

And what if Ghanaians use the fleet of luxury cars they purchase for politicians as public toilets?

Open defecation has become a national badge of honor.

In this day and age when Japanese, Chinese, North Korean, Cuban, and Indian crying babies are exploring and playing on the moon, as all babies do, ours are all over the place with leaking bowls doing just the opposite of what a Dung Beetle will do—environmental cleanliness.

Yet we have put in place a clueless government with as many ministers as the scarlet sins of Rev. Owusu Bempah and Bishop Obinim, which cannot also solve a simple problem as open defecation.

A government that ran its pre-election campaign banner as “the Battle is the Lord’s” is now telling us it cannot employ just one or two of Rev. Owusu Bempah’s omniscient angels to solve all our problems, including open defecation.

A boastful country sitting on a time-bomb, and in leaking begging-bowls, of open defecation and galamsey-driven pollution and political madness says it knows it all, even about not knowing what to do with open defecation.

That Ghana has beaten many countries to become the seventh dirtiest country in the world, and the second in Africa.

Ghana, the sixth fake drug producer in the world.
Thanks to Almighty Open Defecation.
Long story short, the Akufo-Addo-led government does not believe in this “thing” called foreign aid and should welcome the World Bank’s position—accordingly!

In any case what have we been doing with our mineral resources, oil/gas, cocoa and so forth?

Oh yes, the World Bank itself has always been our open defecation.

And the World Bank’s sister institution, the predatory IMF?

Ghana, now under the leadership of property-owning open-defecation democrats.

How can Akufo-Addo use the same mouth for “open defecation” and “the Battle is the Lord’s”?

Those politicians who underperform must be forced to taste open defecation.

How about landlords who don’t have toilets in their houses? And open defecators?

Well, Akufo-Addo should send his Invincible Forces to the nooks and crannies of the country to clean up the giant mess we call open defecation.

Must we expect more from these pseudo-democrats?
We shall return…