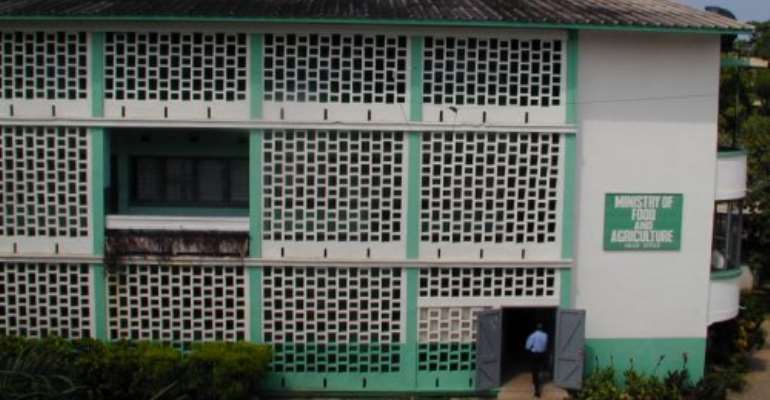 Cape Coast, April 23, GNA - A high court at Cape Coast has ordered the closure of offices of the Central Regional Directorate of the Ministry of Food and Agriculture (MOFA) at Cape Coast over non-payment of compensation to some farmers whose lands were taken over by the ministry.

As a result, the Regional Director, Mr Kwaku Amoo-Baffoe and most of the workers there have, for over a month now, been 'perching' in other offices nearby.

Briefing the Ghana News Agency about the situation on Friday, Mr Amoo-Baffoe said the court order emanated from the inability of the ministry to pay compensation to 85 farmers whose farms were taken over for the establishment of the Assin Kwaata State Oil Palm Plantation in the 1970s.

The farmers, led by one Kwamina Korsah, took the matter to court and on November 30 last year, the court ruled that a principal sum of 427,753,308.78 cedis must be paid to the farmers as compensation for the loss of their farms.

He said on February 4 when the ministry failed to pay the compensation ordered by the court, it further ruled that accrued interests of 215,165,773.95 cedis must be paid in addition to the principal sum, bringing the total amount to 642,909,082.73 cedis Mr Amoo-Baffoe said the ministry was not able to pay the money and on March 19, court officials came to close the offices, and also confiscated a new Toyota pick-up with registration number, GV 1503U. Giving a background to the case, he said initially 101 farmers took the ministry to court in 1975, with claims that their farms comprising 126 acres had been destroyed for the establishment of the plantation.

He said at the time, the court ruled that 629,000 cedis must be paid to them as their compensation, which they rejected. The Regional Director said 15 of these farmers, led by one Paul Kwaning, later went to court again and the court ruled in favour of seven out of the 15.

Asked what measures were being taken to rectify the situation, Mr Amoo-Baffoe said the Regional State Attorney has written to the Ministry of Finance, asking it to pay the compensation to the farmers. 23 April 2005