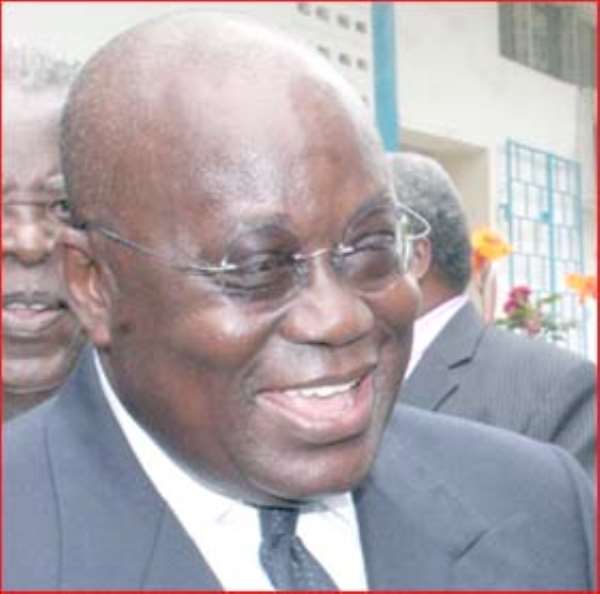 “I’m aware that people are concerned about what they see as maybe the cost of this large government…It is a necessary investment to make for the rapid transformation of this country” (“The British ‘Independent’ Reported on Ghana’s ‘Elephant-Size’ Government,” Ghanaweb, March 189, 2017).

We all know what it is.
Because one does not need the highfalutin language of rocket science to describe it.

It is called job-for-the-boys property-owning democracy!

A country as small as Ghana has as many ministers as the country’s population because, as we are being led to believe, it has more challenging problems than the problems of China, Somalia, India, Syria, the United States, Iraq, Yemen, and North Korea combined.

Going by this simplistic argument, we shall also advance an alternative argument which says the country needs ten Presidents and ten Vice presidents, one President and one Vice President for each region, because each region in Ghana has as many problems as the nation itself.

Then Akufo-Addo and Bawumia will be the President and Vice President for the Greater Accra area.

We will also need ten Electoral Commissions one for each region because, like the country and the ten regions, the EC too has too many challenging problems.

What absolute nonsense!
Unbeknownst to the general public though, the deep state under political gangster Akufo-Addo’s watch had undertaken a number of feasibility studies, as it were, to look into how increasing government size positively enhances efficiency, brings about industrialization and economic prosperity—primarily the core findings of feasibility researchers many Ghanaians still believe confirmed a direct relationship amongst the afore-mentions variables, yet political gangster Akufo-Addo has refused to share the studies’ conclusions with the public.

The findings of the feasibility researchers covered all these grounds.

But, from all indications, it also appears Rev. Owusu Bempah may have forbidden the pseudo-democrat Akufo-Addo government from sharing these findings with the public.

Oops—a typical instance of a slip of the pen!

This is all a dream, which Rev. Owusu Bempah calls “the horn of the unicorn”!

It’s all made up—a sham of political morality.

With this controversial government size however, one hundred ten in all, this pseudo-capitalist called Akufo-Addo is categorically telling Ghanaians that quantity and quality are the same—synonymous.

Or, that the larger the size of government bureaucracy the better enhanced is strategic and tactical policy efficiency.

Then again with this elephantine government size, political gangster Akufo-Addo may be implying that the economy isn’t as bad as he has been trumpeting all along, that the macroeconomic fundamentals are strong.

And this same bloated government says the macroeconomic fundamentals of the nation’s political economy don’t permit it to hire more teachers, doctors, nurses…because the public purse is anorexic, bleeding.

The point is that this is not the right time to handsomely reward political loyalists if the economy is that bad, apparently in its worst form as some are wont to put it. It shouldn’t even be the case if the economy were vibrant.

Therefore, rewarding men and women who may have contributed to his successful political campaign should not be taken to mean these men and women can, or will, necessarily turn the economy around.

Winning political elections and turning around an economy are two entirely different things, as the Ghanaian electorate is not that sophisticated about issues-based politicking.

Political ethnocentrism, institutional corruption, and emotion are the primary determinants of election outcomes in Ghana.

The foregoing contentions notwithstanding, we need to reinforce the notion that it’s rather the quality not quantity of political appointees that can transform the economy. By quality, we simply mean technocratic competence.

Are these Akufo-Addo political appointees all competent, of high quality? We don’t think so.

For the sake of argument, even if all of the political appointees were competent that alone should not have given Akufo-Addo exclusive permission or reason to hire them all, since their competency levels couldn’t have been the same even in the same area of expertise. Selection of political appointees should therefore have brought out the best of the best. This is not the case.

Just look at the way some of these political appointees are shamelessly and desperately defending these bloated government. They are not sufficiently explaining how the government is going to pay for appointees’ cars, maintenance of these cars, gas, security, accommodation, emoluments—ex-gratia payments, salaries, allowances, etc., given the country’s limited resources.

Yes, we’re seeing Mahama in Akufo-Addo in the form of the so-called Dead Goat Syndrome and the Yentia-Obiaa Fallacy.

Couldn’t we do a lot with little, a tight budget?

What is the nature of the challenging problems confronting Ghana?

Are these challenging problems something new no country has ever faced in the history of man?

Are members of the Ghanaian Diaspora to work for free? Or to volunteer their expertise? Will they be remunerated for their services to the nation?

What is the nature of the work plans for these new political appointees?

How do we go about their performance evaluation?
What impact can Ghana make under the Akufo-Addo-led government on the changing dynamics of the global economy, to benefit the economy in terms of comparative advantage and pragmatic nationalism?

Does the Ghanaian politician have a strong work ethic?

Is the Ghanaian politician patriotic?
Are these political appointees willing to take pay cuts given the poor economy?

Do we have efficient supervision mechanisms in place to monitor the activities of these political appointees?

At Akufo-Addo’s age, can he multitask let alone effectively coordinate or oversee the disparate activities of his political appointees?

Are these political appointees dedicated enough to developing the country?

In fine, some of these political appointees may not have what it takes to make it big in the private sector, which is a very weak one, of course, or in a government bureaucracy, say, and so they troop to politics. Politics is the place to make it big, and the “smart” ones who know this are taking full advantage of it to benefit themselves, their cronies and family members.

This is why we have so many corruptocrats, political thieves and criminals in the Ghanaian body politic.

And yet, when Akufo-Addo’s political appointees are asked to provide concrete evidence to prove how Ghana’s bloated government will solve the nation’s myriad challenging problems they simply reduce the humongous question to time, headless speculation, equivocation, and intellectual laziness!

Akufo-Addo, the Don Corleone of a criminal political organization called the New Patriotic Party (NPP), says his number one policy preoccupation is reviving the national economy—which does not stand in isolation.

What does he have to say about the interdependent parts of the economy?

His decisions are becoming an unnecessary drain on the public purse. And his plagiarism that brought us international shame.

Crazy baldhead Akufo-Addo is indeed proving to be grossly incompetent, a disappointment!

Long story short, we shall speculate that he has no way to thank these political appointees whose efforts may have sent him to the Flagstaff House or the Golden Jubilee House other than making them active partakers of the public treasury.

Ghanaians have been duped by a fraudster, by a pre-election political angel who is now showing his other true colors—of political devilry—after having won the general elections at gunpoint.

How could Ghanaians have foisted a moral fraudster upon themselves by a politician who reportedly brought in Serbian and South African to train a private army of vigilante terrorists—the Invincible Forces—he commands? Have Ghanaians forgotten so soon who this dangerous author of ethnic politics—“All-Die-Be-Die Yen Akanfuo”—is?

Akufo-Addo is gradually turning himself into a dangerous, monstrous political criminal Ghanaians may never have expected! Ghanaians must rise to the challenge and shrink his bloated government to fit the public treasury.

This is a patriotic duty they must adhere to in order to rid the elephant in the living room, for a government that cannot make do with little is incompetent, is not worth representing its people, and finally, is not worth celebrating.

The humungous size of Akufo-Addo’s government has proven to be as dinosaurian as his grandiose campaign promises. Now we have an albatross around our necks. This is as bad as his plagiarized inaugural speech.

What a major disappointment, a disappointing mojo!
Well, he must quickly return Rev. Owusu Bempah’s “horn of the unicorn.”

More Feature Article
Modern Ghana Links
Joseph Appah: What Drove An Archaeology Graduate Into Teaching, Emceeing And Stage Acting?
We Prefer Sakawa Government Than You, Trust Me
The Maths Between Diego And My Friend Adu Of Goka
Home Tuition: Do You Need A Tutor?
Anxiety, Prayer And Thanksgiving
Fulfilled Prophecies And Presage Of World Events
Adding value to Ghana’s rubber through tyre manufacturing in the wake of AfCFTA
The Origin, Meaning And History Of Otumfuo Hia Stool
Stop clamouring for sympathy votes: Didn’t you accuse Rawlings of masterminding Mahama’s defeat?
Dossiers Quotes Coronavirus
TOP STORIES