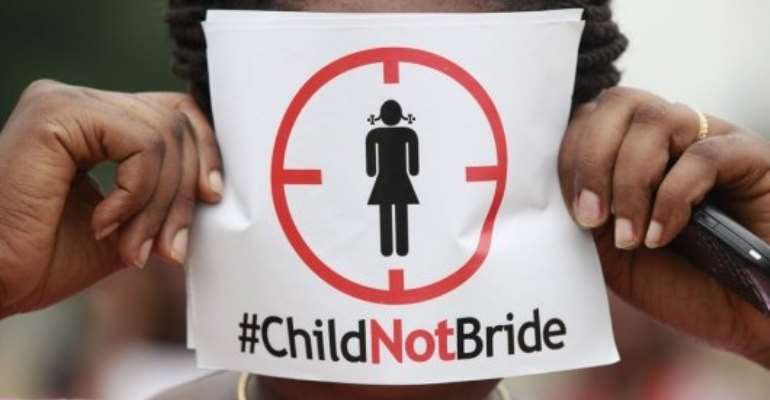 GNA Feature by Samuel Adadi Akapule
Bolgatanga, March 22, GNA - Elizabeth Atubiga was 14 years old and in in primary four, when her parents forced her from school to marry a man, she was betrothed to before she was born.

Narrating her painful experience at one of the stakeholders' forums on child marriage at Nangodi in the Nabdam District of the Upper East Region she said: 'My dream of becoming a lawyer was truncated because of child marriage.

'Born at Binaba in the Bawku West District of the Region, I remember very well in those days when my mother repeatedly told my father to get me out of school because my teachers were praising me for being brilliant.

'She argued that if I grew older I might refuse to be married to the man they had betrothed me to even before I was born.

She said her stay at Nyankpala was full of physical and psychological abuse as her male caretaker who had a wife attempted a number of times to rape me.

Sensing danger, I had to flee to Kumasi where I worked under a woman who was a food vendor,' she said.

Ms Atubiga said she worked until she was 17 years- old when the son of her employer returned home from abroad and proposed marriage to her.

According to her, she was convinced by her employer that she would arrange a descent marriage for them.

She became pregnant by her fiancÃ©e who eventually told her he could not marry her because she was an illiterate.

'To cut my story short, I ended up by not marrying. I am now 45 years-old but I take consolation in the fact that my son is now abroad studying medicine.

'My dream of becoming a lawyer has been truncated. I strongly feel that if my parents were educated, I will not have undergone such an ordeal. I want to use this occasion to appeal to all parents never to make such a mistake like my parents did,' she said.

Ms Atubiga's case is not an isolated one. Many of the victims of child marriage I spoke with shared similar sentiments. A good number of girls from 15 to 18 years in the country particularly in the Northern, Upper East and Upper West Regions are forced by their parents into marriage, often against their will.

For instance in an interview with the Nabdam District Girl-Child Education Officer, Ms Elizabeth Atanga, she said the Directorate had to intervene on a number of occasions to prevent some parents from attempting to force their daughters who were in school into marriages.

In spite of the fact that Ghana was the first country to ratify the United Nations Convention on the Rights of the Child, including the 1992 Constitution and the 1998 Children's Act, which set the legal age for marriage at the age of 18, Ghana has one of the highest childhood marriage prevalence in the world.

According to UNICEF statistics, the Upper East Region has the highest child marriage in the country of 39.2 per cent whilst the national rate is less than 10 per cent.

Development partners including the United Nations Population Fund (UNFPA), UNICEF, World Vision and Action Aid Ghana have supported the Gender Ministry and other local structures to help fight the menace.

At the just ended stakeholders' forum organised by the Gender Ministry, at Nangodi with support from UNFPA, the stakeholders including traditional and religious leaders, Queen mothers, women leaders, and assembly members, passed a resolution to end child marriage.

The resolution was for the stakeholders to team up with the Domestic Violence and Victims Support Unit of the Ghana Police Service to deal with perpetrators of the crime, form vigilante groups in their communities to look for the culprits and to report such incidents.

This is highly commendable and must be implemented by other communities where child marriage is rife.

Government must also adequately resource the Gender Ministry to help fight the canker whilst the law enforcement agencies, the traditional and religious leaders must enforce the law on child marriage as well as use their platforms to sensitise their people to stop the menace.